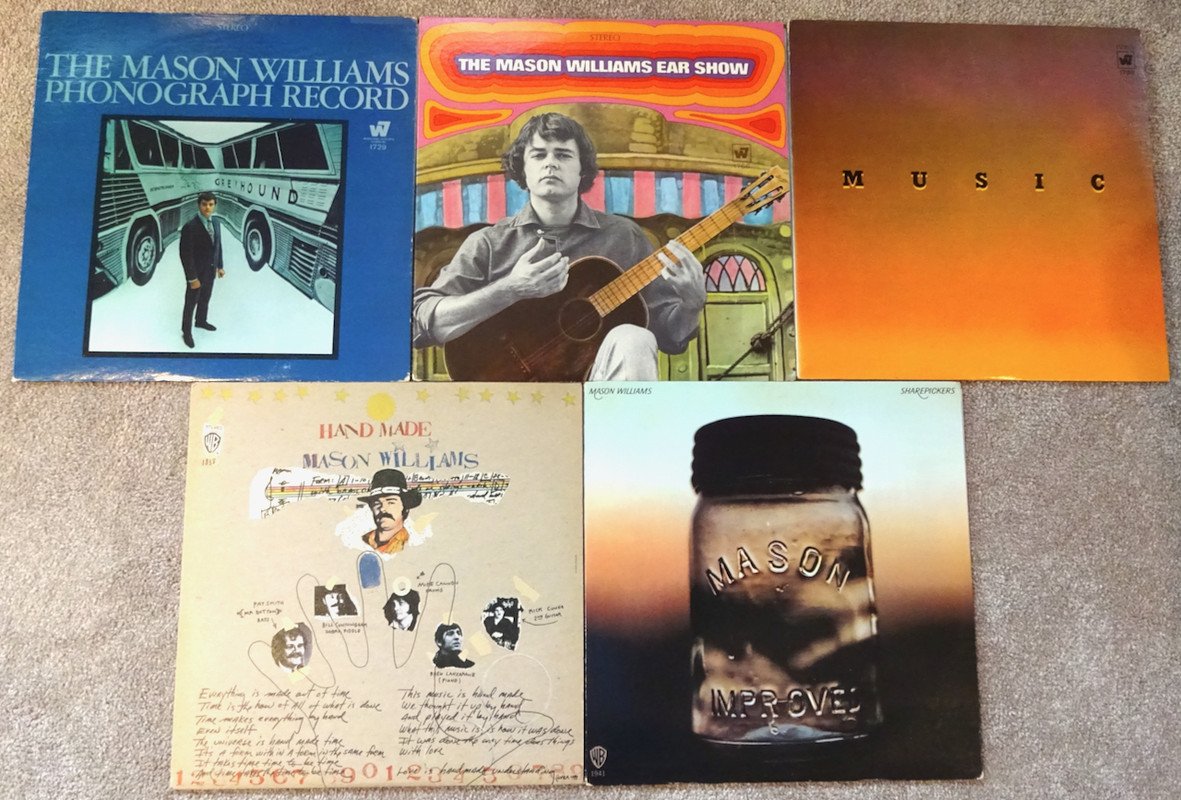 Mason, a very good acoustic guitarist, recorded 5 LPs for Warner Bros., 1967-71. Although Mason’s music can be odd and unusual at times, this quirkiness was the perfect fit for late '60s pop faire (particularly on The Smothers Brothers Comedy Hour (1967-69) where he was both the musical director and a contributing writer). His LPs contain a great variety of music, yet a folk/country undercurrent, particularly in the later LPs, kept the overall offerings rooted in pop. His singing is a bit shaky on the debut LP, but he measurably improved with each ensuring release. The first 4 LPs are all interesting — Phonograph Record (1967) and Ear Show (1968) are both orchestrated affairs and perhaps a bit pretentious; on the other hand, Music (1969) and Hand Made (1970) are more stripped down with the latter probably the best of the lot and a good place to get acquainted with his music (it also features his solo guitar version of Classical Gas). Mason appears to fancy re-arranging previously recorded selections and to that end different versions of the same piece are not uncommon. Interestingly, only the first two recordings were ever released to CD (with 2nd LP having undergone a very brief release) — which is unfortunate as Music and Hand Made are arguably stronger efforts.

Staff member
Site Admin
Many of us remember this (at the time) mind-blowing video on the SMOTHERS BROTHERS COMEDY HOUR using "Classical Gas" as its soundtrack.

Thread Starter
Thanks, Harry. (Looks like a newer recording was used for this upload.)
R

I have two copies of the Phonograph Record. One copy is open for playing and one copy is sealed.

Staff member
Moderator
I've never heard the whole Mason Williams album but I did have the 45 of the original "Classical Gas." I think the song is also on one of the "Have a Nice Day - Super Sounds of the '70s" disks that Rhino released many years ago.

There was also a remake by Mason Williams & Mannheim Steamroller -- they did an album together, sometime in the '80s or '90s. A friend of mine lived near Omaha at that time, and I traveled throught the area on a vacation. For fun one day, my friend and I took a drive over to the American Gramaphone Records building in hopes of meeting Chip Davis (the Mannheim mastermind). He was out of town, but we did get to see their recording studio and warehouse, and I got to hold a copy of the Classical Gas album in my hand a few weeks before it was released. (No advance publicity copies, unfortunately.)

All of which made me really anxious to hear the album when it did come out. It was pretty forgettable, from what I recall... haven't heard it in years.
A

His version of “Manha de Carnaval” from HAND MADE is quirky, but ultimately beautiful:

Michael Hagerty said:
The EAR SHOW version of “Baroque-A-Nova” (posted above) was too close to “Classical Gas” to be a big hit (as was “Greensleeves”), but I think I prefer it to “Classical Gas”
Click to expand...

Couldn't agree more. While I like Classical Gas a great deal (particularly the unique C-section where the bones and drums enter with no bass in a different key; and those gorgeous slightly over-modulated late '60s sonics), Baroque-A-Nova is my fave of the two. We hear a slight over-modulation giving Mason's guitar a crunchy sound (which only works with tubes...you can't get that sound with solid-state equipment, precisely why the remakes of Classical Gas have no bite), a wee bit of Moog and that ultra-cool turnaround with the Bbmaj9 b5 (e.g., at 1:06).
A

I first heard "Classical Gas" on an album from 1987 that my father had on audio cassette (entitled, Classical Gas) that featured Mr. Williams, backed by the group, Mannheim Steamroller. At the time, probably because of the New Age-style at which this particular version was arranged, I really didn't think much of the tune. It was only later that I heard the original version on an oldies radio station broadcasting in Hartford, CT., called, "Big D 103" (102.9 WDRC-FM). It has been a favorite of mine ever since. If I was to make a playlist of the greatest instrumentals ever recorded, I'd put the original 1968 version of "Classical Gas" somewhere at the top of that list.

Staff member
Site Admin
After recording "Classical Gas" from the radio, I managed to acquire an album simply called THE GREATEST HITS (Vol. 1) that was put out by Warner Brothers. It was a multi-artist compilation that included "Classical Gas". 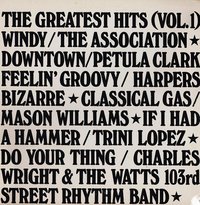 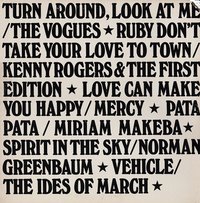 That's the way the gatefold opened, so if you looked at with the record coming out of the side, the artwork was sideways. Those goofy people of the 60s...

It wasn't until many years later that I grabbed a used LP copy of PHONOGRAPH RECORD by Mason Williams.
A

Thanks. It's a total mime job, but we do get to hear the song with its formal ending -- which, I prefer to the LP-version fade. I like how it only took "Ed Sullivision" above 5 seconds until the goofy dancers stole the show. (That whole dancing schtick -- a '60s variety show relic -- was as annoying as all get-out and I'm sure some artists refused to allow all that shenanigans to parade about during their songs. I mean imagine Dylan playing The Johnny Cash Show in '69 with a bunch of chicks in Go-go boots dancing in oversized bird cages...
You must log in or register to reply here.