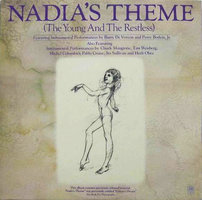 Special thanks to Charles Stern

Staff member
Site Admin
Thread Starter
I was coincidentally digitizing this album when the news hit about the passing of Perry Botkin, Jr., and I realized that this has never been featured as an Album Of The Week, so I've remedied that here. Those who were around in 1976 and watching the Summer Olympics will surely remember ABC-TV's coverage, and in particular, the video they put together of Nadia Comaneci's performances which garnered a number of perfect 10 scores. And they set that video to the music from THE YOUNG AND THE RESTLESS (also known as "Cotton's Dream" from BLESS THE BEASTS AND CHILDREN).

Without missing a beat, A&M Records released that track with the new title "Nadia's Theme" as a single, where it managed to find its way up the charts to #8. Then they assembled this album to further take advantage of the popularity of the track, grabbing a bunch of instrumentals that had been issued by the label of the preceding year or two.

I personally have always enjoyed the album. One of the standout tracks for me was always "Zero To Sixty In Five" by Pablo Cruise from their LIFELINE album. The track starts like many on this album with just a gentle piano, but throughout its five-minute-length, it builds to a real rock-type crescendo. Be careful driving to this track, you might find yourself going too fast by the end!

I first got this one in 1984 and the songs blended together very well the overall feel of the instrumentals to me had some Romantic connotations to them ( even though I was only 17 at the time) I too needledropped my copy to CD I remember using Nadia's theme for a few Soap Opera Parodies I made for Radio ( titled "The Dumb and the Senseless") Every song on the Album is still a Gem it was my gateway to the other artists featured such as Tim Weisberg Herb Ohta etc. I was already building my Chuck Mangione collection since a few years prior I will say "Zero to sixty in five" by Pablo cruise was a rare treat i was unaware they did any instrumentals up to that point but it has that classic vintage A&M Vibe to it

Staff member
Site Admin
Thread Starter
Many years later, I learned of the Mexican version of this album that had a bit different track list. 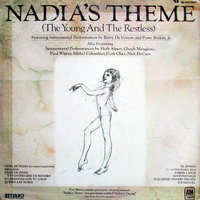 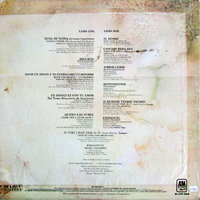 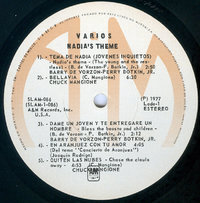 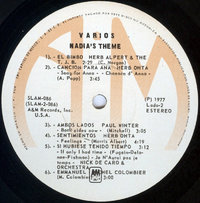 The appeal here is the inclusion of Herb Alpert & The T.J.B.'s "El Bimbo" single.

The Different Track listing gives a Totally different listening experience i haven't heard of some of these such as the Paul winter and London studio 70 but I either have and or heard the rest its interesting how some of our domestic Albums are different elsewhere very much the way The Beatles UK and US albums were different and I understand the various reasons why. Again its part of the joys of collecting
J

Yes, I guess you all heard about the passing of Perry Botkin, Jr(as well as Phi Spector, et al). I was impressed with Mr.Botkin when he was in that Wrecking Crew documentary, and giving the backstory on "Nadia's Theme". I really enjoyed what he said at the end of his interview: "I get to do what I LOVE, and make a living at it";something to that effect. Man, so far the year has started off lousy: Larry King, Cicely Tyson, Cloris Leachman, Tanya Roberts, and some more people gone this year.

Staff member
Site Admin
Thread Starter
A big connection to Herb Alpert is this song by Perry Botkin, Jr. on his A&M album PORTS (SP-4639, 1977). It's called "The Lovers" and was written by Herb Alpert.

Too bad that the "Ports" album is NOT on iTunes. Probably that album (reel to reel tape) was lost in the Universal Studios fire back in June 2008.

Harry said:
A big connection to Herb Alpert is this song by Perry Botkin, Jr. on his A&M album PORTS (SP-4639, 1977). It's called "The Lovers" and was written by Herb Alpert.

A Great Song for Sure

Unfortunately, the "AOTW" thread for "Bless the Beasts and Children" is closed (probably due to inactivity). I'm about seven years too late for that discussion, but wanted to share my vinyl rip of the "Bless the Beasts and Children" soundtrack, which shares some Barry de Vorzon and Perry Botkin, Jr. tracks to the "Nadia's Theme" LP, including "Cotton's Dream" (retitled here as "Nadia's Theme"), and the instrumental version of "Down the Line."

It's been a while since I've listened to this LP, but is the "Nadia's Theme" reprise the same was "Free" on the "Bless the Beasts and Children" soundtrack?

Staff member
Site Admin
Thread Starter
As I recall, there were some edits done to the main "Cotton's Dream" track to loop a portion and make it longer for the NADIA'S THEME record.

Yes, "Free" and the reprise are the same track.

You can download the soundtrack to "Bless the Beasts & Children" here:

Bless the Beasts & Children/01 Bless The Beasts And Children.mp3 and 13 more files

It's a lovely clean sounding copy too, no pops or clicks from the record I could hear when listening to it!
You must log in or register to reply here.