Contributor
Thread Starter
Decided to go digging around on Apple Music this morning and found some A&M/CTi releases that I hadn't seen available before (if I'm just late to the party, it won't be the first time):

Staff member
Site Admin
Qobuz of course has these, and many other Nat titles (just one screenful here): 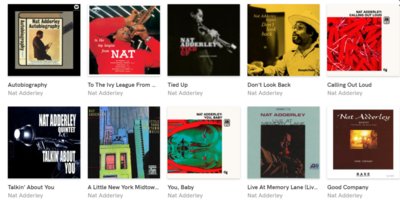 They are recent additions, as I had checked for these early in the year and didn't come across them. So thankfully I can get downloads of both titles, even though my vinyl is OK.

I still haven't seen Stonebone appear yet, and I keep checking regularly. But if Universal is sending these two obscurities to streaming, chances are Stonebone will be there in the not too distant future. It took the Tamba 4 about nine months to hit streaming distribution (completely with its terrible alternate album cover), and it was even rarer than Stonebone (basically just a rumor).

Contributor
Thread Starter
If/when they do STONEBONE, I’d love to see ISRAEL and BETWIXT & BETWEEN, too.

Michael Hagerty said:
If/when they do STONEBONE, I’d love to see ISRAEL and BETWIXT & BETWEEN, too.
Click to expand...

I would hope so. The cost for a label to reissue a streaming album is minimal--there's no physical product to create, so no production, shipping or inventory cost. I could see a small number of A&M/CTi albums never issued but Johnson and Winding are jazz legends. Certainly better known than Nat Adderley (and not to knock Adderley, but I always felt he was in the shadow of his brother Julian aka "Cannonball").

The only thought I have is that with Universal owning these, there's a chance the masters went up in flames. Not everything was in the blaze, but I don't think even Universal knows what they have and what they don't. If the label had the masters stored on the east coast, had safeties stored elsewhere, or copies of the masters in other countries for non-US release, there could still be something available to issue a release from--after all, they did find the Nat Adderley albums.

The big problem with Johnson and Winding's albums--the only way to look them up is by their album title, since CTi used a different name for each. If I'm not mistaken, they were billed as J.J. & K, K & J, J & K. (Plus, I think they only recorded three albums since CTi ran out of variations on those letter combinations.

Thankfully, because I use Roon Player, any new version of Stonebone or the other two will show up under my "Versions" tab with a Qobuz logo. I've been pleasantly surprised a few times by that. (My library version is my own needle drop.) 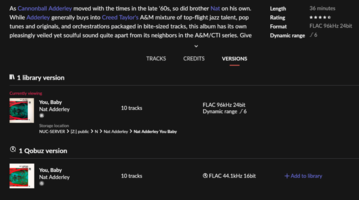 Contributor
Thread Starter
So, as of today, the only A&M CTi LPs missing from Apple Music streaming are:

...which might be the smallest number of unavailable titles since 1971.

Staff member
Site Admin
There will be no tears shed for that Artie Butler album.

I don't know why the Johnson/Winding albums have been held back for so long--the other three titles are pretty much forgotten to time, but Johnson and Winding recorded many albums together, both before and after the A&Ms, so it's not like their pairing was an obscurity.

Staff member
Site Admin
I like that Artie Butler album!

Staff member
Moderator
Like Harry, count me in as one who enjoys that Artie Butler CTi LP. I'd buy it if came out on CD...

Staff member
Site Admin
It's on CD in my house!

Once things calm down here with all the ongoing projects, I want to finish up getting the remaining CTi records digitized, along with others I've purchased that are not available in digital. Thankfully now that a few more digital versions have materialized (noted above), I can pick them up on Qobuz to save me some time. And eventually, I may fill in all the A&M/CTi with vinyl copies anyway--they make for a nice set.

Staff member
Site Admin
Still no Stonebone on digital yet. But I'm still expecting it.

Staff member
Site Admin
Qobuz is showing four MCA albums, released under the Verve Reissues label--Artistry, First Cuckoo, Whirlwinds and Very Together. I remember from a thread last year that you were wondering why those first three were never released on CD. Whirlwinds and Artistry are $8.99, and the other two $10.49. So, about $39 would cover all four.

These are good times for releases like this--eliminating unnecessary physical product allows the labels to pump out many more releases without incurring production, shipping and inventory carrying costs.

Contributor
Thread Starter
K&JJ's ISRAEL is now on Apple Music. Still no BETWIXT & BETWEEN or STONEBONE.

Contributor
Thread Starter
It appears ISRAEL is the only recent A&M/CTi addition. So, as of today, these are the only ones not available for streaming on Apple Music:


ARTIE BUTLER: HAVE YOU MET MISS JONES?
RICHARD BARBARY: SOUL MACHINE
TAMIKO JONES: I'LL BE ANYTHING FOR YOU
J&K: BETWIXT & BETWEEN
J&K: STONEBONE

And as I said back in November, this is probably the smallest number of unavailable A&M/CTi titles since 1971.

Staff member
Site Admin
I was surprised yesterday to see Soul Flutes available via Qobuz--I looked it up out of curiosity and it shocked me to see that album there (I'm sure it sold in the dozens originally). I don't really follow what's available CTi-wise since I have all the records here, and those titles are nothing I'd stream while on the road anyway. At least the CTi catalog post-A&M has seen a lot of reissue activity, both on CD and on vinyl and lately, hi-res availability through Qobuz and HD Tracks.

I'm guessing Stonebone will make its appearance within the next year--California Soul came along eight months past the "exclusive" vinyl release. But to note, Israel did have two prior CD releases in Japan, so that is likely the digital source for the streaming version that is out there now. Since the others have never seen a CD release, and the masters may or may not have gone up in smoke thanks to the Universal Tape Roast Incident of 2008, chances are they'll never be available. Stonebone I'm thinking may have been sourced from a master in Japan, as that was the only place where it was released, and they may have retained the tapes for it. All guesswork though.

BTW, the first Baja Marimba Band album was also released digitally this year, but I'm thinking it must be the old Japanese master as it is mastered way too bright, and it's mastered at a low level, two trademarks (if you will) of those Japan CDs from years past.
You must log in or register to reply here.