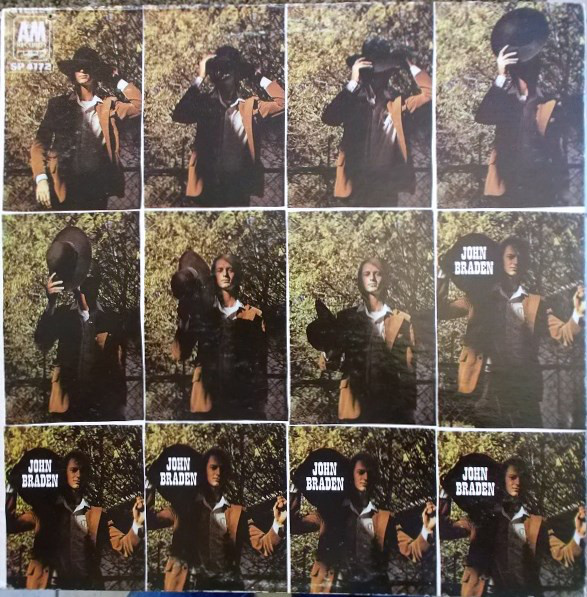 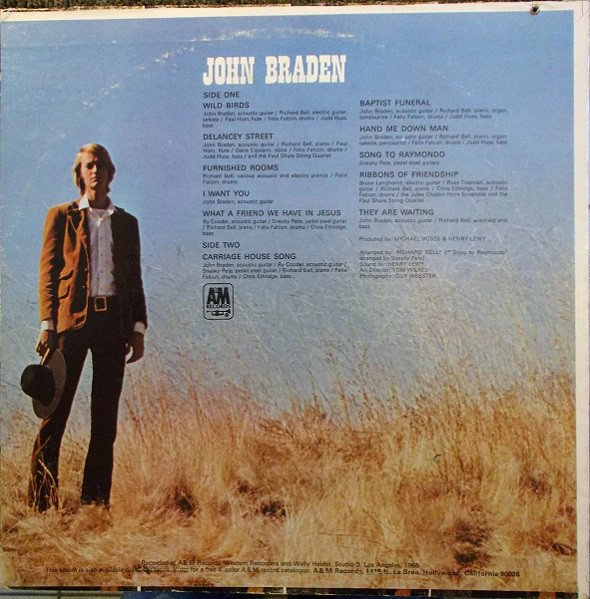 Am unable to locate the full LP; nevertheless, there are these two selections...

Biography of John Braden. Passed away too soon.

Apparently John appeared 4 nights in a row at the Drinking Gourd in San Francisco that year (opening night on March 20, 1969, according to the S.F. Examiner from that date).


A few months later he also appeared at Ungano's in NYC and here's what the Chicago Tribune wrote about it (and his A&M album) :

Thread Starter
There were a total of three selections from Braden's A&M LP out in YouTube land. I listened to all three. While I appreciate the overall musicianship, I am simply not capable of warming to that kind of high-pitched male voice. (The YouTuber poster even went so far as to liken Braden's voice to that of Tiny Tim's.

I actually found a total of five selections from his 1969 LP on YT. Here are links to the other 3 (besides the two you already posted), should you feel curious enough :

The only ad that I could find in a newspaper was in the L.A. Times of March 30, 1969. A 2-page ad for the Two Guys Discount Department Stores "Grand Opening Specials On Stereo Tapes And Records!". Nearly all LPs (with tiny pics) were tagged "Your choice - 2.49 ea.".
In the A&M section you could

CHOOSE FROM:
The Flying Burrito Brothers - new smash, "Gilded Palace of Sin"
Baja Marimba Band - featuring "Those Were the Days"
Alan Copeland Singers - featuring "If Love Comes with It"
Paul Winter - "The Winter Consort"
John Braden - remember you heard his name on A & M records


I can't deny sharing your feelings towards that kind of high-pitched male voice, especially with a lot of fast vibrato involved

I must say, that the songs themselves are not bad at all. I also noticed that Ry Cooder played guitar on two of the tracks. Would have been nice if someone like Rick Nelson would have sung them, or John Denver, or maybe a member of the Mamas & Papas...

Walkinat9 said:
Would have been nice if someone like Rick Nelson would have sung them, or John Denver, or maybe a member of the Mamas & Papas...
Click to expand...

Agreed. I would vote for the Everly's.

Staff member
Moderator
And there's that "Phil Ochs 'fake' vibrato"... That aside, I kind of enjoyed these cuts. He's not singing as high as Chris Montez, so that's something! Another one to seek out!

--Mr Bill
You must log in or register to reply here.