Thread Starter
In the heart of the CD era, the bulk of Kenton’s catalogue was the recipient of a fairly comprehensive reissue campaign via Capitol (notable '50s/'60s titles), GMP—Crescendo ('70s titles) and Collector’s Choice (off-beat Capitol titles). About one month ago the Kenton switch went ON in my head and so I spent the last three weeks maximizing my Kenton collection.

Although Kenton maintains a fairly large following, he polarizes interested music connoisseurs to significant degree, as a result there are plenty of M and NM CDs out there in the $6-12 range. (The multitude of NMs come from that rather large group of curious onlookers who plunked down $15.99 on a given Kenton title at Borders back in the early 2000s and played only about 16 minutes of it...hating every second before taking it off.) I run hot and cold with Stan; at its worst I get a headache with five screech-and-reach trumpets playing fff above high-C. At its best, the unique and fascinating arrangements are memorable, compelling and provide endless fascination — particularly for those of us who fancy trombones and trumpets over the saxophone family. My favorite periods are the early '50s (innovations orchestra) the mid/late '50s (swing/dance book era) and the '70s (lab band era)

The one CD sans the cover art is a Qobuz download. I’ve covered all Kenton eras with the exception of the early pre-1950 daunting years and the mid-'60s Wagner / Neophonic period. (Note: Adventures In Jazz and Adventures In Blues, both largely cut in DEC61, have our friend Pat Sanatore on double bass. Man, dig his note choice and ensemble interplay -- hard to believe this is the same cat coasting on all that root-V stuff for Herb from '65-69.) 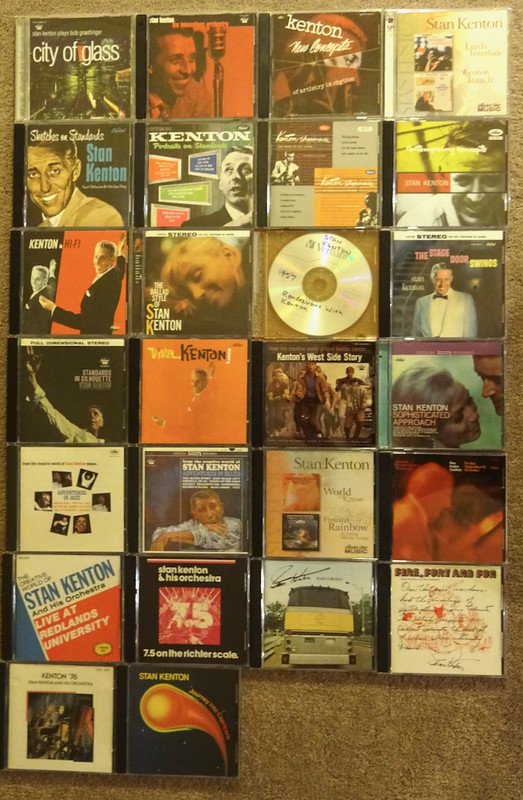 Contributor
Not that there are likely to be many in this group, but for the uninitiated, Stan Kenton is absolutely worth a deep dive.

Coincidentally, the first piece of recorded music I can remember hearing is his 1956 version of "Intermission Riff":

Staff member
Site Admin
"Intermission Riff" is prime Kenton! 👍 Kenton in Hi-Fi is a favorite of mine, but it has to be the mono version. When Capitol reissued it on CD, they wisely chose the mono version. The stereo version would have been better if they had 1) mic'ed the bass properly (as it's almost non-existent) and 2) cut way back on the reverb which, alas, played a part in many of Capitol's early stereo LPs. (I have both versions on vinyl.) The bonus track is the shortened version of "Minor Riff" from the stereo version of the album, which is a different take (different solos). This album was similar to one that others recorded back in the day, re-recording their "hits" for the new technology of the day (either the transition of 78 RPM records to the LP, or the transition of mono LP to stereo).

I've been a fan of many of his recordings. I can count Adventures in Time, Artistry in Bossa Nova, Cuban Fire!, Viva Kenton!, Adventures in Jazz, and Kenton in Hi-Fi among my favorites of his. (One note about Viva Kenton--the stereo LP is so drenched in reverb that entire parts of the orchestra are buried in the louder sections. The CD version is a much-needed remix--the balance stays the same, but they used only minimal reverb compared to the LP. It's nice to be able to hear all the instruments in the remix.)

I agree he can be polarizing and, of course, there are as many albums I don't care for as there are those I like. There's no denying how influential he was, and the members of Kenton's bands (musicians and arrangers) over the years have become legends in the jazz community. I hear Kenton's influence in big bands that followed, especially in Maynard Ferguson's, who took the "modern" big band approach but updated it with a more radio-friendly sound (especially at Columbia). And Ferguson was also known as one who nurtured up-and-coming jazz talent, and was huge on education as well. (He used to have a yearly gig in our area at the same high school every year. Unfortunately I never attended.)

Thanks to this thread, I now have Viva Kenton! playing... 😁 It must have been Capitol's cheapest cover art, since it steals the Kenton in Hi-Fi photo but sets it on a red-orange background.
B

I always liked Stan's singing on St. James Infirmary. He compares himself to Woody Herman as he makes his vocal "debut."

bob knack said:
I always liked Stan's singing on St. James Infirmary. He compares himself to Woody Herman as he makes his vocal "debut."
Click to expand...

I left off the vocal LPs where his band backs up Ann Richards and of course the well-known duet LP with Stan on piano backing up June Christy -- which was actually my first Kenton CD from back in the '90s. There's also his one-and-only solo piano LP ('74), which was never issued on CD. I recall reading that Stan's solo piano LP was a difficult session. I understand that Stan's health issues were impacting him to significant degree by the mid-'70s. It's probably that a solo piano LP was simply too much of an undertaking by that time. Another thing about Stan that I read years ago: When he left Capitol in '69, he did so with the arrangement that he could both re-release his Capitol LPs and release unissued sessions on his new record label, Creative World.
L

Back then I'm told you were either a Kenton fan or Woody Herman fan. They both were great in my opinion. It's clear that Kenton "stole" the opening theme of Jimmie Lunceford's "Yard Dog Mazurka" written by Gerald Wilson for his "Intermission Riff". Have a listen--see what you think. A contemporary of Ellington and Basie--Lunceford never got the credit his great big band deserved.

Staff member
Site Admin
Very similar! And upon hearing this, it's no surprise Gerald Wilson wrote it--those dense chords are one of his trademark styles, and this was around the time Wilson was writing and arranging for Lunceford's band.
L

Gerald Wilson like Jimmie Lunceford was an awesome musical artist. When he left the Lunceford band he developed his own brilliant big band. He wrote "Viva TIrado", which in 1970 became a big hit for El Chicano. Here is Wilson's perfect rendition of the song.

lj said:
Gerald Wilson like Jimmie Lunceford was an awesome musical artist. When he left the Lunceford band he developed his own brilliant big band. He wrote "Viva TIrado", which in 1970 became a big hit for El Chicano. Here is Wilson's perfect rendition of the song.

Gerald also had his own Sunday afternoon radio show for years on KBCA-FM, the jazz station in Los Angeles. Not a "special", he treated it just like he was one of the station's Monday-Friday DJs, but he brought such taste to the selections and insight to the artists and sessions.

lj said:
Gerald Wilson like Jimmie Lunceford was an awesome musical artist. When he left the Lunceford band he developed his own brilliant big band. He wrote "Viva TIrado", which in 1970 became a big hit for El Chicano. Here is Wilson's perfect rendition of the song.

His Mosaic box set is an excellent way to get all of his Pacific Jazz albums all in one place. Blue Note also released that album (Moment of Truth) in its Tone Poet series recently, and it sounds excellent, straight from the analog tapes. Fills the room with Wilson's big band! Lately I've been listening to The Golden Sword. Given his appreciation for Spanish and Hispanic musical ideas, I'm not surprised that El Chicano covered one of his songs.

He was better known on the west coast for decades but the last few albums of his career were for a label in the Great Lakes--Mack Avenue Records. (I'm about three miles from their office.) He wrote a suite for Monterey, as well as suites for Chicago and Detroit, in the 2000s and 2010s. Even in his 90s he was on his game. (His career must have spanned seven decades.)

Bob Edmondson was in his group for about a year, back in the early 60s (if I'm not mistaken).
You must log in or register to reply here.