The song "Good Friends?" by the Poppy Family reminds me of the song "Nouns" (from "Grammar Rock" 1974) on ABC "Funshine Saturday" mornings!!
A

Happy Birthday Olivia Newton-John!!! 72 years old today.
She continues to inspire me and I thank her for her gift of song.

Rick-An Ordinary Fool said:
Happy Birthday Olivia Newton-John!!! 72 years old today.
She continues to inspire me and I thank her for her gift of song.

Feminist icon Helen Reddy, the voice of empowerment anthem 'I Am Woman,' dies at 78

Feminist icon Helen Reddy, the voice of empowerment anthem 'I Am Woman,' dies at 78

Oh, that’s really sad. I liked her a lot. She opened for the Carpenters in Fresno, Ca. the first time I saw her. She came to my town a couple of years later. Fine voice and entertainer. RIP

I really liked her Love Song for Jeffrey (sp?) album and her version of Old Fashioned Way was the first one I ever heard.

Helen Reddy had one of the clearest voices I've ever heard. My favorite songs of hers are "Peaceful", "Emotion", and "You and Me Against the World". RIP

My favorite HR tune, is Emotion, which has the same music as my favorite Kiki Dee song, Amoureuse. They just have completely different lyrics though. Released around the same time. Haunting melody.
A

Rick-An Ordinary Fool said:
Happy Birthday Olivia Newton-John!!! 72 years old today.
She continues to inspire me and I thank her for her gift of song.

I was watching this on the TV a minute ago. I’ve seen it many times before but This time, I suddenly realised that the woman at the beginning and the end is Olivia Newton-John.

Rip Helen Reddy.I wonder if there are any photos taken of her and carpenters together.

I’m sure there are, from the Fresno concert. It was also a fundraiser for Jerry Brown’s presidential campaign run, Saturday May 29th 1976, Selland Arena. I made the trip 2 nights in a row. Same venue on Friday for Leon & Mary Russell with Firefall the opening act, on their first tour. Great weekend!

I am a huge Tammi Terrell fan..

The moonlight confessions of Stevie Nicks

On the eve of the release of a solo concert film, Fleetwood Mac star Stevie Nicks opens up on Lindsey Buckingham's exit and looking for love in her 70s.

KarenFan2020 said:
I am a huge Tammi Terrell fan..

There is only 3. Film clips of Tammi.that still survive..all 3 are with Marvin and they're all the same song. One of the clips is live. On The Tonight Show.
A

GDB2LV said:
My favorite HR tune, is Emotion, which has the same music as my favorite Kiki Dee song, Amoureuse. They just have completely different lyrics though. Released around the same time. Haunting melody.
Click to expand...

I liked the Kiki Dee song quite a lot at the time and thought that she had a slight resemblance to KC during the low notes. I don’t think I think that now, though - this was when I was a pre-teen.

For those who like Helen Reddy, just for your interest, there will be a very short tribute to her on Australian TV this Saturday morning, as follows:-

I think that all of these clips are probably readily available on YouTube already - the interview on ‘ABC Arts’ has been doing the rounds on Twitter these last couple of days, for example.

On the same show, fifteen No Doubt music clips are going to be shown and then fourteen Gwen Stefani clips.

So what’s the big thing about No Doubt at the moment? All I can find on the internet is that Gwen Stefani just decorated her house. We can be quite certain that No Doubt is definitely not touring here so.... I don’t know why all the clips.

The show is sort of a party all night to music idea, so that’s probably why not many Helen Reddy clips. The producers usually aim for the 16 to 35 crowd, probably assuming that none of their usual audience would have any idea who Helen Reddy was and that the 50 to 75s who would know probably won’t have been able to rouse themselves from their slumber by that time.
A

That Poppy Family song "No Good To Cry" reminds me of Roxette "Listen To Your Heart" (from 1989) when the female singer is saying "yeah".

AM Matt said:
The Poppy Family (Susan & Terry Jacks) "No Good To Cry". That song is NOT on the 1996 compilation CD "A Good Thing Lost: Greatest Hits".
Click to expand...

Ah, but it WAS on the rare CD compilation that was released by A&M in Canada just called GREATEST HITS: 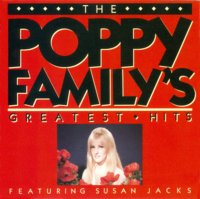 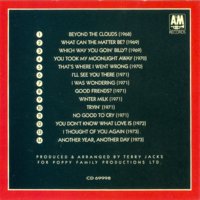 My memories of the Poppy Family starts with this song. I lived near the BC border and listened to Vancouver radio stations. This got lots of airplay. Great song, great voice.
Last edited: Oct 3, 2020

Staff member
Site Admin
When The Poppy Family's first album was being readied for US release, they re-did their big hit, "That's Where I Went Wrong" for the US market, giving it a less "countrified" sound. That's the way it was heard on US radio and on the US issue of the album.

When the two compilation CDs were compiled, Terry Jacks opted to use the original Canadian version of the song, except on the second CD called A GOOD THING LOST, he added the US single version in mono as the last track. Still unissued on official CD is the US stereo version of "That's Where I Went Wrong". Here it is lifted from my vinyl album:

Loved their song Which Way You Goin' Billy?

KarenFan2020 said:
Loved their song Which Way You Goin' Billy?
Click to expand...

Me too, but I fear that the song's title may have helped contribute to The Poppy Family just not getting the recognition it deserves. It's a two-fold problem.

[1] There was another 1970's song called "Billy, Don't Be A Hero" by Bo Donaldson & The Heywoods that topped the charts and is now often considered one of the worst records of that decade. The use of the name "Billy" in the title has probably helped condemn "Which Way You Goin', Billy?" just due to careless confusion.

[2] The group's name "The Poppy Family" conjures up a number of negatives, I suppose. "Poppy" is a sort of silly word, the name of a flower that also is the basis of the narcotic drug opium, and today is the name of a female singer whose career was elevated in the YouTube era.
You must log in or register to reply here.

Jan 6, 2021
downeypatriot
D
David Pomeranz Interview on Carpenters and "Tryin' To Get The Feeling Again"

Wednesday at 5:29 PM
rockdoctor
R
M
The Carpenters and the Blizzard -- February, 1971, Oklahoma