Deni Hines had a hit in 1982 with the group, The Rockmelons, with Bill Wither's 'Ain't No Sunshine'. Her mother, Marcia Hines, had the hit version of 'Something's Missing (In My Life)', which Karen Carpenter recorded.


Another Deni Hines song that I like a lot is 'Imagination'. I always like Deni's rich, lower register and her vibrato. I like the acoustic guitar and the muted trumpet on 'Imagination'.

Two additional women that deserve mention are Alannah Myles and K.T.Tunstall. Both had great vocals and started out with huge hits and then they both just vanished.
A

newvillefan said:
Absolutely love Tanita Tikaram! Although her vocal range is limited, she’s got a very entrancing voice which perfectly complements the dark, moody arrangements of her songs.

Oh my, long time since I last heard that song

The reed instrument (oboe? clarinet? bassoon??) in the chorus almost makes it a bit Carpenter-ish/-esque

I always liked that happier sounding song of hers, "Good Tradition"

Since today is February 9, we need to wish a Happy Birthday to Carole King. Also this year is the 50th anniversary of Tapestry!!!

rockdoctor said:
Since today is February 9, we need to wish a Happy Birthday to Carole King. Also this year is the 50th anniversary of Tapestry!!!
Click to expand...

I really liked that album then - and now...

Thread Starter
I was listening to Carole King the other day thinking, What would we do without all those classic songs she wrote and performed? Canaan is one of my favorites. The melody grabbed me first. It's an obvious Carole King tune.

I’m a big fan too. There’s a really nice collection that I bought about 6 months ago called The Real Carole King. It’s a 3 disc set that has pretty much all the best cuts from her Ode Records days. It’s very low priced and affordable. My favorite album by her is Rhymes & Reasons for personal reasons. No big hits, but Been to Canaan, and Peace In the Valley are beautiful songs. I prefer R&R, Music, and Fantasy over Tapestry. I’ve heard it so much, I’m a bit tired if it. I’ve been fortunate to see her perform 4 times either at the Universal Amphitheater(Harry Potter ride now) or the Greek Theater in LA. She’s finally in the running for the Rock and Roll Hall of Fame as of today. She along with our favorite due deserve to be there.

Staff member
Site Admin
Years ago, I was given a copy of a two-cd Carole King Box set called The Ode Collection. It contained a good number of her best tracks from that powerful 70s period, including all of the tracks from TAPESTRY. That set has served well over the years, but last year I saw this and decided it was worth the $21 for five albums: 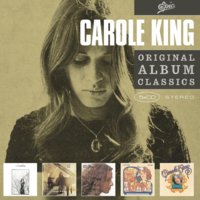 It's got five of the A&M/Ode-era albums minus TAPESTRY, so it made a great fit with the earlier set. Here you get
WRITER
MUSIC
RHYMES AND REASONS
FANTASY
WRAP AROUND JOY

The CDs are packed in replica mini-LP jackets - but not gatefolds.

Money well spent! The 3 disc one is the abbreviated version of that, including Tapestry cuts, with pretty much all the hits and favorites. You can’t go wrong with either one, or both if you’re a fan. I love her electric grand piano. It sounds beautiful. She said in her autobiography that she always used the smaller studio at A&M, because Carpenters always had the big one booked. They met while she was recording IGTTST for her follow up to Tapestry, called Music, and asked if they could record it as well. They did it justice, and better.
Last edited: Feb 10, 2021

Although I really love Jazzman, I've always found Carole a great songwriter but not as great an artist. Maybe it is her voice, but in general, I think her voice is pretty nondescript and rather bland. Amazing songwriter, though!
A

"Thoroughbred" from 1976 is another great Carole King album featuring the song "Only Love Is Real"!!
R

Carole once said in an interview with Lou Adler, that she was not a trained singer. She was also raised in Brooklyn so she had that heavy New York accent.

Thread Starter
She's not a polished singer, but she certainly brings her own compositions to life and makes you listen to the story.
Thanks for the set suggestions.
R

Carole deserves Rock and Roll Hall of Fame as a performer. She should have been in for that years ago.
GDB2LV is right. Karen Carpenter deserves to be in there too. Another deserving woman is Roberta Flack who turned 83 today.
R

Harry said:
Years ago, I was given a copy of a two-cd Carole King Box set called The Ode Collection. It contained a good number of her best tracks from that powerful 70s period, including all of the tracks from TAPESTRY. That set has served well over the years, but last year I saw this and decided it was worth the $21 for five albums:

It's got five of the A&M/Ode-era albums minus TAPESTRY, so it made a great fit with the earlier set. Here you get
WRITER
MUSIC
RHYMES AND REASONS
FANTASY
WRAP AROUND JOY

The CDs are packed in replica mini-LP jackets - but not gatefolds.
Click to expand...

There is also a set of four of the albums on Capitol Records plus Love Makes The World.
It includes:Simple Things, Welcome Home, Touch The Sky and Pearls. All are single sleeve with no gatefolds and no lyric sheets.

song4u said:
She's not a polished singer, but she certainly brings her own compositions to life and makes you listen to the story.
...
Click to expand...

I agree with this this...good assessment of her appeal, in a nutshell...
A

There’s something on a couple of the tracks from the Dee Dee Bridgewater ‘Bad For Me’ album that reminds me very slightly of the ‘Karen Carpenter’ solo album. Obviously, the vocals are very, very different but I think it’s the funky bass, the flowing fender rhode keyboards and the slight jazzy flavour that vaguely echoes Karen’s release. Maybe this particular track isn’t the best example. The Dee Dee Bridgewater album is also from the same period - 1979.

....and the uptempo beat, plus the horns and layered background vocals. Just slight echoes. By coincidence, although recorded on a different label, ‘Bad for Me’ has a few musicians that also appear on either the ‘Karen Carpenter’ or Carpenters albums. I just found that out when I looked the personnel from the album up a second ago. Maybe that was something I was recognising. There’s Greg Phillinganes on Fender Rhodes and keyboards on both ‘Karen Carpenter’ and ‘Bad for Me’, plus Carolyn Dennis, who is on BV’s on ‘Made in America’ and ‘Passage’, (I think), and Paulinho da Costa, on percussion.

^^^ Oh I LOVE this! I’ve never heard of her before now. Thanks for posting, I’m going to look this album up. The title track reminds me of “Don’t Try To Win Me Back Again”. It’s also reminiscent of the Leata Galloway track “Eat Your Heart Out”, which I first heard underneath the dialogue in a scene from the Stir Crazy.

I still cannot believe that Lulu 1981 self-titled is NOT yet available on Apple iTunes. That album has "I Could Never Miss You (More Than I Do)", "If I Were You" & "Who's Foolin' You" (which I think Reba McEntire should do that remake)!!

Staff member
Site Admin
Way back in the 60s there were a lot of television variety shows, and each week, these shows would feature guest stars from all over the entertainment field, providing showcases for their talents and sometimes getting them into comedy sketches, depending on the show. 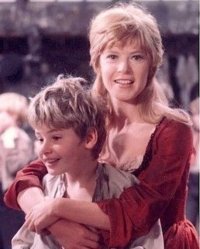 One such guest that I recall from numerous appearances on shows like ED SULLIVAN, GARRY MOORE, DANNY KAYE, etc., was a female singer named Shani Wallis. She was from the UK and did many of these king of shows, and I remember thinking she was a welcome guest. I can't say that I recall any specific song from that era, but she always sounded good to me - as good as anyone could on a 19" television with a 5" speaker.

Shani is most remembered today for a breakout role she played in the movie OLIVER in the role of Nancy. She also recorded a few record albums with probably no big hits. As I was going through some old audio tapes from the late 60s, I saw a song that managed to get played on the radio station I listened to. Surprised to see her name in the list I'd compiled, I gave it a listen, and what a delight! Every now and again, I come across a long-forgotten song that has fallen by the wayside of time, and revel in its re-discovery. This is one of those. It's one that's gotten stuck in my head since I found it again.

So here, from the graveyard of forgotten records, I present "Reaching Far Too High" by Shani Wallis. (Hey, someone else remembered it - it was already on YouTube!)


Given the tools of today, I managed to track down a 45 - a promo edition like the one in the video. For this particular song, I cannot find any reference to it ever having been on an album, or that a stereo mix was ever made. The radio tape I have is from my mono taping days, so that's of no help. 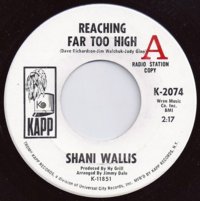 Female singer Shawn "With Every Beat Of My Heart" (KAPP Records late 1971 early 1972) Remake of the Josie & The Pussycats 1970 song.
You must log in or register to reply here.

Jan 6, 2021
downeypatriot
D
David Pomeranz Interview on Carpenters and "Tryin' To Get The Feeling Again"