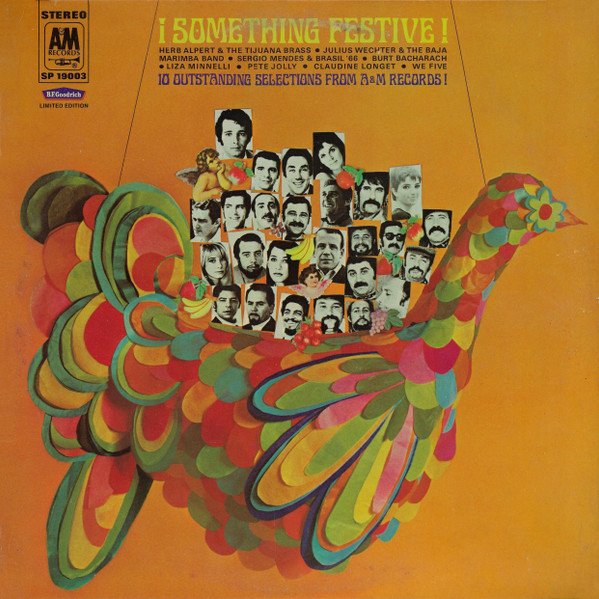 The little tire-store LP that we never "tire" of.

Over on Discogs, there are 11 different variations/pressings of ¡SOMETHING FESTIVE!. I thought it might be interesting to see which ones we all have.

1. My original 1968 copy that actually came from a BF Goodrich store in Ardmore, PA is still around. It has this style of label with the title all on one line, and all song titles below the center hole: 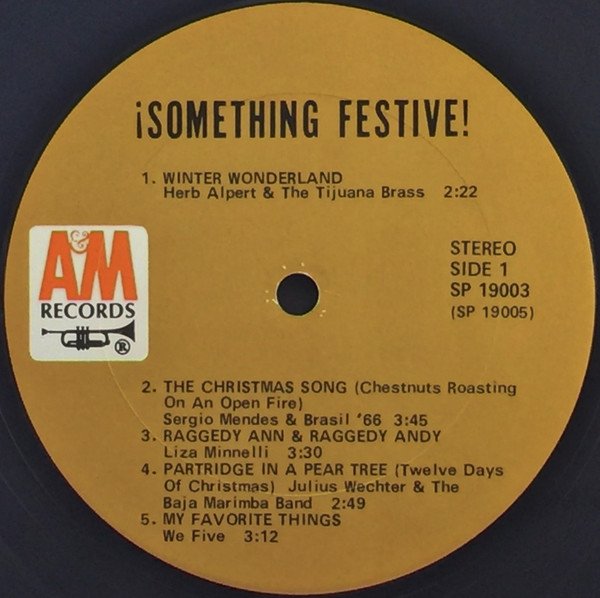 The '68 copy has a bit of ringwear on the sleeve and some rubbings from storage, but otherwise I'd call it Very Good. The vinyl was played at least once a year, but still comes in at a VG+. It currently has a plain white innersleeve. Don't know where the original company innersleeve went, but it ain't here.

2. I also have a second copy of this pressing, one that came from an eBay seller and it was still-sealed. I've opened it and dubbed it to digital, so it's only been played once and is still in its shrink wrapping. This one has a company innersleeve. Definite Near Mint all around.

3. Sometime in the late '90s, in my search for the ultimate copy, I found a really nice copy in a used record store (Plastic Fantastic). This one has a bit of a different label style where the title is split onto two lines in a larger font, and all song titles are below the center hole. 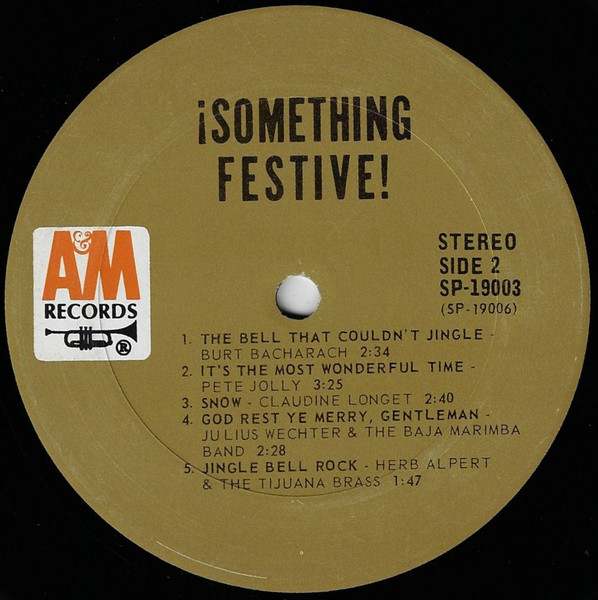 This nice copy gets a VG+ all around and has the company innersleeve. Only a small amount of storage-wear on the bottom edge.

4. The comes the foreign pressings. The first is from Germany with the alternate cover and title, MERRY CHRISTMAS FROM HERB ALPERT AND HIS FRIENDS: 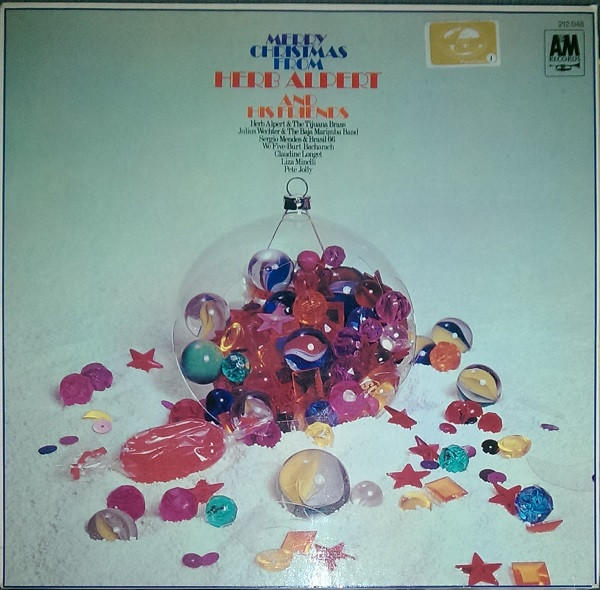 This is a Deutsche Grammophon pressing. The back cover retains the piñata artwork, but puts the titles in the correct record order. I'd hoped to get a really nice clean pressing out of this one, but it's not quite as clean as others I have. Still gets a VG+ rating.

5. Finally, there's one from the UK that I have that's really not this same record, but a later version from the 70s, called MERRY CHRISTMAS DARLING. This one was a 2-record set and features MOST of ¡SOMETHING FESTIVE! interspersed with other holiday tunes that A&M had issued in the interim. 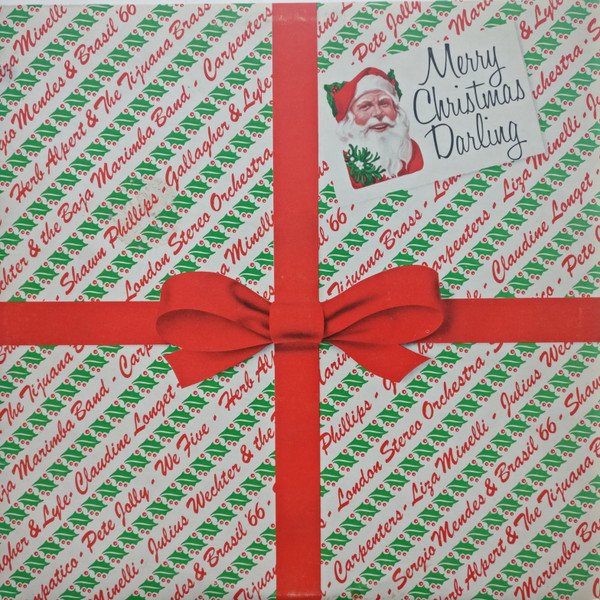 Staff member
Site Admin
Our official video version, which is an expanded version of the album:

Over 9,100 plays on YouTube, and plenty of nice comments about it. This album certainly isn't rare, as many who commented have mentioned they heard this album while growing up since the family had it in the house, and it brings back a lot of memories.

My first was a find in the $1 or $2 bin at a local record store. My last one (fifth copy) was sealed. Haven't yet compared different pressings to see which sounds better but, being a compilation, it's already a generation removed from the original master tapes, so this never anything better than an average-sounding record.
R

Ever since I found this album in early 2021, I have seen this many times since. I always look at the record itself to see the condition in case I want an additional copy.

Staff member
Site Admin
Thread Starter
Also posted in the other Christmas Memories thread, this was the commercial that ran on TV heralding the availability of ¡SOMETHING FESTIVE!.

My memory is that a printed ad ran at that time in the Philadelphia Evening Bulletin, the newspaper we always got at our house. Dad liked an evening paper rather than the other choices, The Philadelphia Inquirer and the afternoon Daily News. The Bulletin went out of business and the Daily News has been folded into the surviving Inquirer.

When we saw the ad, I urged Dad to drive us over to the B.F.Goodrich store. I already had the CHRISTMAS ALBUM, but wanted this one too. Upon first playing, I noticed the lack of choir on "Winter Wonderland" and the change in the opening of "Jingle Bell Rock".

Staff member
Site Admin
Well, thank Universal for the 🖕 in blocking our Something Festive video--12 of the tracks are blocked worldwide. I will try to recreate it as a playlist using tracks available on YouTube, augmented with a few tracks of my own that weren't flagged. I'll post that here if I can get it wrapped up soon. But, will leave the video linked in case things change at YouTube (which I doubt...as a friend once put it, Universal would f*** up a one-car funeral).

Rudy said:
Well, thank Universal for the 🖕 in blocking our Something Festive video--12 of the tracks are blocked worldwide. I will try to recreate it as a playlist using tracks available on YouTube, augmented with a few tracks of my own that weren't flagged. I'll post that here if I can get it wrapped up soon. But, will leave the video linked in case things change at YouTube (which I doubt...as a friend once put it, Universal would f*** up a one-car funeral).
Click to expand...

Universal Does it again. It figures.

Staff member
Site Admin
Yeah. Just about every vinyl reissue they do is screwed up in one way or another. But that's just the lastest in a string of blunders which also included torching the bulk of their music library in 2008, since they were too cheap to store it correctly...

Staff member
Site Admin
Strangely, the video is back online...

Rudy said:
Strangely, the video is back online...
Click to expand...

Wow that Is Strange perhaps maybe Universal has some Christmas spirit after all? we can only hope

Staff member
Site Admin
I had edited the description to add a couple of links to other Xmas albums and a link to Discogs to buy the album. I removed those and the video was unblocked. 🤷‍♂️ Who knows what YouTube is thinking? They blocked it another time, when I added the timing for the beginning of each track (which are automatically converted into links). Makes no sense.

Staff member
Site Admin
Thread Starter
And I attempted to throw up my straight copy from LP as one long file, and I was given the same "Blocked Everywhere" treatment. So I just abandoned the attempt. I had no links in the description but it still blocked it.

Staff member
Site Admin
What was really interesting was that the Herb/TJB tracks were the ones not blocked, except maybe "Jingle Bell Rock" since that version has never been released elsewhere.

So I'm just leaving it alone... 😁 And I, too, was going to try to upload the LP version, but I won't bother now.

Staff member
Site Admin
I might just call this video The Gift That Keeps On Giving. 😁 Staff member
Site Admin
One of my copies was $1.00, or perhaps two--my first copy couldn't have been more than $2, given the store I'd found it at. The $1.00 copy was a "rescue" from a store that was just down the road from our office--when they marked records down to $1.00, they would put two dots on the record label.

All told, even my sealed copy was cheap...
You must log in or register to reply here.