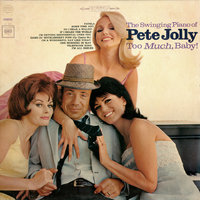 Side 2
6. Same Ol' Huckleberry Finn (Up Cherry Street)
7. Do I Hear A Waltz? (from "Do I Hear A Waltz?")
8. I'm Getting Sentimental Over You
9. Favela
10. On A Wonderful Day Like Today (from "The Roar Of The Greasepaint-The Smell Of The Crowd")

Staff member
Site Admin
Thread Starter
In a recent shootout of versions of "Up Cherry Street", this album by Pete Jolly was mentioned. And somehow, it never got an "Album Of The Week" type of treatment, even though other non-A&M Pete Jolly albums have been recognized.

There are quite a few recognizable things to an A&M fan here. On Side 1, there's "Telephone Song" and "Some Time Ago". Sergio Mendes did both of those songs, and Baja Marimba Band also did "Telephone Song".

As noted in the other thread, "Same Ol' Huckleberry Finn" is another name for "Up Cherry Street", along with another track on Side 2 that Herb famously did, "I'm Getting Sentimental Over You".

And there's "Favela", done a couple of times by Sergio Mendes.

Finally, "On A Wonderful Day Like Today" is from the same show as "The Joker" and Wes Montgomery's "When I Look Into Your Eyes".

This is a pretty good album and one that fits in nicely with the classic A&M family of recordings.

Staff member
Site Admin
I upgraded to the hi-res version of this just recently--it's a nice Columbia recording from that era. Jolly always was a very upbeat, "happy" type of performer and I like how his versions of tunes have that extra spark that others lack.

Staff member
Site Admin
It was a good nickname for Ceragioli (and easier to pronounce).

His quickness on the keys was amazing. "Whistle While You Work" was something he recorded in his early days on the When Lights Are Low album (RCA), and he performed it a few times since then--similar each time, of course, including the version on Give A Damn.

Harry said:
Yep, Jolly was aptly named - his playing always puts a smile on my face.
Click to expand...

I couldn't agree with you More my friend

Staff member
Site Admin
I wonder how much trouble Jolly got into when he got home from the photoshoot for this album cover.

Rudy said:
I wonder how much trouble Jolly got into when he got home from the photoshoot for this album cover.

Photoshoots are one thing (though I'm sure Jolly had to detail the occurrence during a conversation with the wife)...but imagine having a spouse that's an actor or actress that makes a living making those R-rated Hollywood flicks with all that you-know-what kind of action.

Staff member
Site Admin
His 1963 album on Ava, Little Bird, is spinning at the moment. The Pete Jolly Trio & Friends, the Friends (all West Coast jazz legends) being Howard Roberts on guitar, and Kenny Hume on percussion. Jolly's trio, as is most often the case, features Chuck Berghofer on Bass and this time, Larry Bunker on drums. Even in his later years, Berghofer was his bassist and as of the 1995 album Yeah!, the trio of Jolly, Berghofer and Nick Martinis had worked together for 21 years (and I know they were still performing together beyond 1995 at their regular Los Angeles gigs). 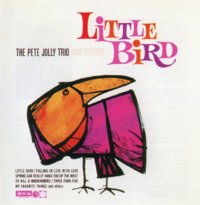 Staff member
Site Admin
Thread Starter
I don't have that particular album, but four of its tracks are on a VSOP compilation I have.

Staff member
Site Admin
Thankfully VSOP reissued those Ava albums in the CD era. I have Little Bird here but am streaming the follow-up Sweet September on Qobuz right now. One of Jolly's earliest recordings was in 1955 on the self-titled album by The Five, arranged by Shorty Rogers. On a couple of Rogers' albums with the Giants in the mid 50s, Jolly was listed as Pete Cera in the credits (on Atlantic). 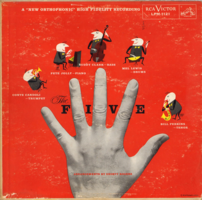