Staff member
Site Admin
This one has an entry on Discogs, but it looks like a fantasy home-made compilation to me. First, it's got an A&M logo on it, and it's supposedly from 2011. The added word "VOCALIZE" in the title doesn't seem like anything Herb or his people would have come up with. It says "EU" as the country of origin. 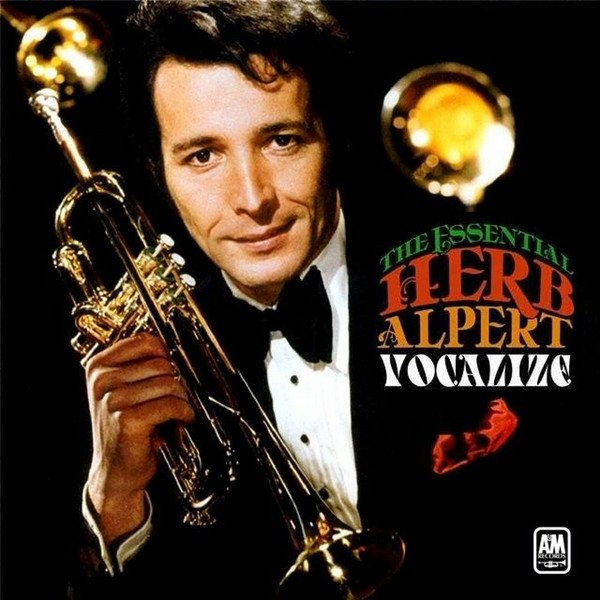 View credits, reviews, tracks and shop for the 2011 CD release of "The Essential Vocalize" on Discogs. 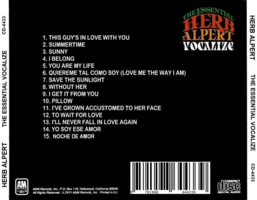 Staff member
Moderator
Years ago, I made a compilation CD that I called "Herb Alpert: Words and Music" that consisted of Herb Alpert vocal songs. I included songs with full-on vocals, but I also put a in few like "Sunny" and "Darlin'" that only included just a few vocals for variety. I included "All in All" from the Michel Colombier Wings album, but I left out some of the more obvious Herb clunkers like "Talk to the Animals" and the above-named "Pillow" (which I don't like at all). Quite a few of the songs in that compilation above are also on my comp.

Staff member
Site Admin
It screams illegitimate. The EU never used the CD-xxxx designation in 2011. And if it really were A&M, I'm sure they had some sort of Universal legalese in fine print on the case somewhere, as they do. The barcode numbers are not quite compliant either--the number scans as a 13-digit ISBN (for which there is no record of, no pun intended), not a product UPC code (as you'd expect for music). The terrible cover art should also be a clue--it's an oft-stolen photo of Herb, always with a TJB-ish logo next to him.

We'd have to prove it was pirated music before Discogs would accept it. (I think it's filed under "unofficial release".) I could just stick a comment in there that it seems like it's a pirated release.

Hmm. I really like "Pillow". After all of the bombast on side one of KEEP YOUR EYE ON ME, "Pillow" calms things down nicely for the more mellow side two.

Staff member
Site Admin
"Pillow" is the overlooked Jam & Lewis track on the album. It's also my favorite of the four, although they're all good.

Hmm. I really like "Pillow". After all of the bombast on side one of KEEP YOUR EYE ON ME, "Pillow" calms things down nicely for the more mellow side two.
Click to expand...

Well.... I'm just not a fan of Jam & Lewis in general. To me those songs were the only instance where Herb seemed like a guest performer on his own records, although I will say it's good to hear Lani singing with Herb on "Pillow." I think it's mainly the percussion sounding so mechanical and all the various synths, etc. makes it sound more dated than even his '60s music. Just not my cup-o-tea, I guess.
You must log in or register to reply here.