Staff member
Site Admin
Thread Starter
I am taking part in the public beta of Qobuz. Detailing my thoughts here as I discover what the service offers.

Qobuz is a streaming service out of France, primarily serving the EU and UK. They have recently worked on entering the US market, and have hired some major talent to get it launched, including audiophile legend David Solomon, who was originally part of Peachtree.

Their claim to fame is that they not only offer lossless CD-resolution streaming, they also offer the Internet's largest selection of high-resolution streaming files, up to 24-bit, 192kHz. As of this writing, they have over two million hi-res titles available both for streaming and for sale. Tidal is the only close competitor, yet the quality of many of their lossless files is suspect, and they have also been distributing MQA-encoded files, a highly controversial and polarizing lossy high-resolution format (an oxymoron) that is proving to be pretty much a stillborn technology.

As part of the audiophile connection, Qobuz (with David Solomon's obvious influence) has worked with such cutting edge software companies like Roon Labs, who has just announced that the latest version of Roon now supports Qobuz. Since many audiophiles have bought into Roon, they will be more willing to give Qobuz a try. (The way Roon works is that it integrate's a person's own music library with that of Qobuz, so that music is easy to discover and play back. The Roon controller can then send the music to whichever supported device in the home the person chooses.)

I'm using the mconnect app so I can stream via DLNA. Here are some screenshots showing the player and part of a selection of albums. (An overlay shows the resolution you are streaming at.) Click to enlarge.

This is from the official Qobuz app. Left to right--album listing, album player, track queue, and a sample of an artist overview written by Qobuz staff. Note here, too, the "Hi-Res" badges beneath some of the album listings.

Finally, here is the desktop application, which lets you choose which audio device to stream to on your computer, or choose a Chromecast-audio-capable device anywhere on your network. 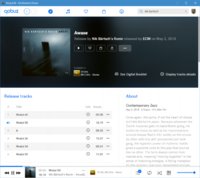 Initial impressions are that it sounds pretty good, better than Tidal's lossless. I need to shift around a few things to make a proper comparison.

Staff member
Site Admin
Thread Starter
I have some new digital hardware arriving later this week, courtesy of PS Audio, and will have a proper way to compare the quality of files streamed from Qobuz against those I already have in my library.

Otherwise, so far, my experience with Qobuz has been mostly a positive one. If I am working, I use a desktop system for playback, which consists of a pair of near-field speakers, a small subwoofer, a low-power tube amplifier (EL84 output tubes) and a separate DAC (from Cambridge Audio). I use the Windows version of the Qobuz player app. I have run into some minor glitches but for the most part, it is easy to use, and search results are fairly good for finding music. (Unlike Tidal, which has major issues with its search engine.) The app can not only play back through a computer's sound output (I use the WASAPI driver to output via Toslink optical digital), it can also cast to Chromecast-capable devices. DLNA/UPnP support is in early beta stages and I have found that it never works in my situation.

Qobuz price levels are about equal with others out there, although their higher tiers are unique.

In the overseas Qobuz plans, there are yearly subscriptions that essentially give you two months free. $99/year, $199/year, $249/year, respectively.

Note that you can create an account at Qobuz and use it solely to purchase music as downloads, in whichever resolution you choose. You do not need to pay for streaming to do so.

The final plan is only available for a yearly subscription: "Sublime+" for $299/year. This is Hi-Res streaming, with a discount on the purchase of Hi-Res titles. In the many samples I looked at, the discounted cost was as much as 50% off of the original price, which in many cases put the Hi-Res price substantially lower than the CD-resolution price. For those who purchase a lot of Hi-Res files, this is a great option--the extra $50/year pays for itself after about six or seven downloads.

Rudy said:
I have some new digital hardware arriving later this week, courtesy of PS Audio, and will have a proper way to compare the quality of files streamed from Qobuz against those I already have in my library.
Click to expand...

The sound quality of the Qobuz files is excellent so far. I had to make some changes in playback here at home, including the new hardware mentioned above. This also included a new library/player software package. I am using a trial of Roon at the moment and it is working out nicely. I don't care for the cost of it, but the flexibility it offers for playback is unrivaled so far. I like how it offers up both albums from your collection, with Qobuz albums listed beneath, for easy access without needing an additional app. I'll do a more formal introduction to Roon at a later time, but it makes it easy to compare files between my library and Qobuz streaming as I can put the tunes next to each other in my queue.

Staff member
Site Admin
Thread Starter
I'll probably mention this in my AXPONA report, but I got the chance to attend a "flash DJ" session with David Solomon, Qobuz's audiophile ambassador, in the Legacy Audio room, where he chose selections from the catalog to demonstrate its platform and superior sound quality. Down in the Marketplace, I had a chance to speak with a Qobuz representative, who told me that they have completed negotiations with another major music distributor, and many more titles will now be appearing. The two labels I inquired about (Mack Avenue Records, and HeadsUp International which is a division of Telarc) are included, and they are in the process of loading these titles. (Since Qobuz started in France and the EU, they have to make deals to "back-license" these titles for US streaming.)

Members who already subscribe to the $14.99/month plan are automatically bumped to the Studio plan. The Sublime+ subscription (which adds steeply discounted high-res downloads) however is only $50 off for a yearly subscription.