Staff member
Site Admin
Thread Starter
From my experience, this is another very rare LP. It's a mono-for-AM radio version of SOLID BRASS that contains the rare 45 compressed version of "Without Her". I've only ever seen one reference to it by someone on Discogs who didn't own it, and I haven't added it to Discogs yet. 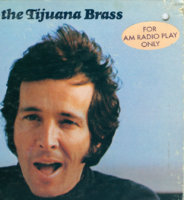 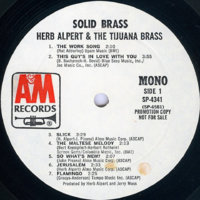 Staff member
Moderator
Always a pleasure to see these sleeves and relive the memory of tracking down rare A&M items. In the pre-internet era it was a process of scanning catalogs and magazines, especially "Goldmine" and "Discoveries," through numerous auctions, classified ads and trading "want lists" by mail.

The McCurn and Lewis albums were 'rare' in my neck of the woods but easier to find elsewhere because of distribution patterns. Lewis was popular in the Pacific Northwest, for example.

stores had gigantic Schwann Catalogs on hand to facilitate ordering albums that weren't popular enough to be kept in stock. I remember locating WOZARD OF IZ that way, along with Melvin Van Peebles' albums which I don't even recall seeing on the shelf in college towns.

Obtained an original SPIRITS AND WORM through a New Jersey collector who got my want list from a 'friend of a friend.' Learned this album had limited distribution in the NYC area. Only a few copies were sold before it was pulled off the shelves because of the "satanic" front cover art. Musically it's similar to Jefferson Airplane, with innocuous love songs and nothing remotely occult.

The late Steve Young, best known for writing "Seven Bridges Road," played a few shows in local clubs. I was fortunate to catch one of his shows. The album, featuring his own version of what became a hit for the Eagles, was reissued on the U.K. Edsel Demon label in the '80s.

Thanks for a fun late night trip down memory lane.

Let's not forget a group called "Hope" (late 1971 or early 1972) which was produced by Canadian Jack Richardson (Guess Who). Matt Clark Sanford, MI

How about "Wincle Lamoyan Coan" by Baja? Does anyone know where I can hear this rare tune?

Contributor
A&M had one of the most aggressive catalog cut-out policies in the business at the time. If an album didn't sell well in six months, it was gone. Most likely necessary in the early days to get some cash, rather than none, for stock that didn't move.

Staff member
Moderator
I remember in my early days in the biz, trying to order the "Wozard of Iz" album because I was just curious about it. I think I saw it listed in one of those "brochure" type catalogs that they would put out. Never could get it, it was probably cut-out before I even heard of it.

Staff member
Site Admin
Thread Starter
In 20-odd years of A&M Corner, I've yet to see a scan of one of those "Write for a free" catalogs.

Well, Canadian Sweethearts was quite rare, but The French Song was available on CD in Canada (with bonus tracks) for the longest time.

New
In 20-odd years of A&M Corner, I've yet to see a scan of one of those "Write for a free" catalogs.
Click to expand...

I got one once from our music distributor. I don't know if it was the same as the "write-in-for" catalogs or not. As I remember, the one I got was a 3 or 4-fold brochure with popular albums pictured, along with a list of catalog titles (not a comprehensive list, just the current front-line stuff). Nothing too fancy. I'm sure that's where I saw the Wozard of Iz title. If I ever find it I'll be sure to scan it!

Harry said:
In 20-odd years of A&M Corner, I've yet to see a scan of one of those "Write for a free" catalogs.
Click to expand...

Steve Sidoruk said:
Well, Canadian Sweethearts was quite rare, but The French Song was available on CD in Canada (with bonus tracks) for the longest time.
Click to expand...

I tried to order that CD but in 2009 when it was listed as available but it was on back order and after 6 months I cancelled it because I got tired of waiting and having it cancelled and reordering it thankfully I found it digitally for downloading and then ripped it on to CD myself I really enjoyed hearing the whole French Song album. It's a true A&M classic from the earliest era

Lucille Starr - Say You Love Me 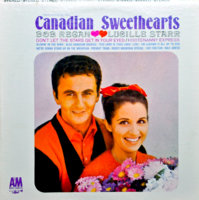 Lucille Starr - Say You Love Me

Staff member
Site Admin
Thread Starter
I have the Canadian Quality Records/A&M version of the CANADIAN SWEETHEARTS SP 4106 album, and the CD of THE FRENCH SONG.

Harry said:
I have the Canadian Quality Records/A&M version of the CANADIAN SWEETHEARTS SP 4106 album, and the CD of THE FRENCH SONG.
Click to expand...

You are one lucky Fellow my friend

Staff member
Site Admin
Thread Starter
My copy of CANADIAN SWEETHEARTS is different from Steve's. It doesn't have the "STEREO..STEREO" across the top and the A&M logo is top right. It says Quality Records and was manufactured by Quality Records but has a classic A&M ochre label. It's unlike anything on Discogs.
K

A note: The Best Of Herb Alpert & The Tijuana Brass A&M Dee-Jay Sampler does exist in Stereo. I own the Stereo version and it is true Stereo with the Stereo LP versions. I have the Mono "Beat Of The Brass" stock LP, paid $1 for my near mint copy, the only one I've ever seen in the wild.

Staff member
Site Admin
Thread Starter
Yep. I have both the mono and stereo DEE JAY SAMPLER, and a mono BEAT OF THE BRASS. Many dedicated mono mixes on both.

I had the Stereo DJ sampler back in the day.

Also, had the original "Offering" cover. However, the LP inside was "Ticket to ride".
K

You'd think it would be pretty straightforward---"How many LPs are we pressing? That's how many jackets we need."

Staff member
Site Admin
Thread Starter
My suspicions are that somewhere along the line, someone found an OFFERING cover without the LP, and they shoved a TICKET TO RIDE LP inside.

Unless it was found sealed, this is the most likely scenario.
You must log in or register to reply here.

Feb 24, 2021
Mike Smith
M
David Pomeranz Interview on Carpenters and "Tryin' To Get The Feeling Again"