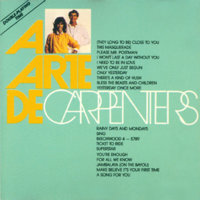 After years of searching, I've finally obtained a copy of A ARTE DE CARPENTERS, a fairly rare Brazilian compilation from the 80s. It had been a two-record set and was combined into one CD.

Given that this set was compiled before Richard's big remixing project in the early 90s, the remixes that ARE here tend to be the gentler 85 remixes. And there are some originals as well, like the original album mix of "A Song For You" found literally nowhere else but the A SONG FOR YOU CD.

Also included here is the song "You're Enough", which is not anthologized anywhere else. A fluke in the mastering is that many tracks have reversed stereo, but four do not. It seems that a number of Brazilian CDs are plagued with reversed stereo.

I find the sound quality appealing with crisp highs and a solid bass, yet mastered at a low enough volume as to not invoke any sound clipping. If you can find this one, turn it up - it sounds great.

@Harry congrats! That is great. Glad you found it and thanks for sharing.

Staff member
Site Admin
Thread Starter
I knew it was out there - I just could never find a source that would sell it to someone in the USA.

Discogs has three listed for sale. Has anyone ever purchased through that site?
Jonathan

Staff member
Site Admin
Thread Starter
Yes. Usually it's quite a good site to purchase from.
You must log in or register to reply here.