I am still using my Panasonic stereo from 1976 for playing lps. I stack 2 or 3 on and let them play and then flip them over.
I do remember some of the 2 record sets of sides 1 and 4 and 2 and 3 being on separate records but then about 1978, they would be side 1 and 2 and side 3 and 4. Star Wars was the former layout in 1977 but in 1978, Superman was the latter layout.
Generally, if I am stacking a few lps, it is by the same artist.
I have not bought any of the new issues of lps as they are far too expensive for me.

GDBY2LV said:
They sell them at Audio Advice, tone arm lifters. They are expensive, starting at $220.00 or more.
Click to expand...

I'm not that desperate. I'll get up and lift it myself.

I've used manual tables for decades and it has never bothered me.

Little Fwend on a Technics 1200-series: 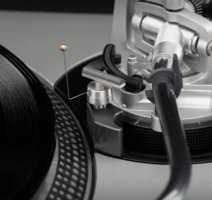 Staff member
Moderator
It was actually called the Accutrac turntable, after giving it some thought. They advertised the heck out of it in Rolling Stone and I remember one of our vendors listed it in their catalog but they never had it in stock, I'm not sure why -- so we never got to carry it. I do think you're right about the "changer" version being by BSR. 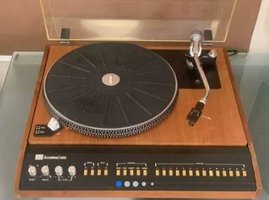 Staff member
Site Admin
That's it--I couldn't think of the name! The ADC Accutrac 4000. As I understand it, ADC (Audio Dynamis Corp.) was owned by BSR (Birmingham Sound Reproducers) at the time--BSR didn't have a line of cartridges, and bought ADC to fill that void. Hence the ADC logo was similarly "boxed" like the BSR logo.

The 4000 was just as infamous for the space-aged infrared receiver ball for the remote: 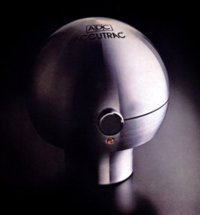 There's a demo video of the single-play 4000--you'll notice the infrared receiver off to one side:


The Accutrac +6 (3500) had the changer feature, and lowered the records gently with a concentric platform that raised to avoid dropping the records a long distance:


This brings back a lot of memories, honestly...

Staff member
Site Admin
There was also an LP with instructions on how to use your new Accutrac 4000:

I remember the whole scenario with our vendor.... they were a pretty big distributor that sold a variety of brand names but their main lines were Pioneer and Marantz, and they also had BSR (which is surprising, given what Rudy posted above). Then one day the salesman said they were going to be getting the Accutrac turntables, so I got a little excited about that, since they were being advertised all the time and people were asking about them. Then every month I would ask him about them, and he kept saying "not yet, but soon." Then after a few months of that, he told me they were supposed to be in "next week" so I put in an order for a couple of them -- but they went on backorder. Then every month they were still on backorder for a while and then they disappeared off of the list. The only info I could get out of the sales guy was "It just didn't work out," meaning I suppose they couldn't agree on terms or something. So that was the beginning and end of my Accutrac 4000 experience -- I never did see one in the flesh.

We carried the "Voice of Music" line which made changers but they were more of a popular-priced, plastic-base kind of table. They made "console" stereo cabinets too. And we also had Zenith, which tried to enter the hi-fi arena briefly but wasn't too successful.

Staff member
Site Admin
"Didn't work out" could also mean the product was unreliable or being returned for refund or warranty work often, and the distributor may have chosen not to carry it. You may have dodged a bullet there. I remember all the ads in Stereo Review (and possibly Audio) at the time, but after the initial splash, I didn't see them much anymore. Yet there are a handful for sale online, so some of those were sold at one point.

VoM manufactured their own consoles and also made record changers for others, so they were bigger than I thought they were. My mother's aunt handed down a small console when they got better equipment in the early 70s, and it lived in my bedroom for a few years. It was this color: 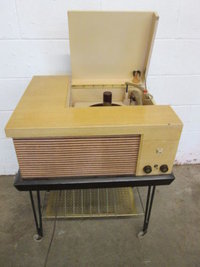 ...although the legs pictured here are likely not the original. It had three oval speakers--a larger 6x9 towards the left, a smaller ~4x6 on the right (mounted vertically), and there was another ~4x6 mounted around the left hand side. It was a tube-powered changer, and it had an auxiliary RCA jack input inside, presumably for a radio receiver (mounted to the left of the vent, lower on the metal plaque). 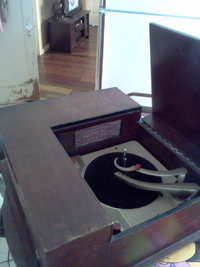 The front controls were tone and volume, with a clear pushbutton rod that lit up when the changer was powered on, and it pushed on a pin connected to the changer control so you could start or change records without opening the lid.

Wow! That brings back memories of the late 50’s and early 60’s. My aunt had that exact unit in the first picture. It became my 2nd hi-fi turntable around 1965, until I received an actual stereo amp with a built in turntable, that had 2 wall speakers in 1971. Thanks for that picture. I will show it to her tonight.

Staff member
Site Admin
We had at least one other VM in the extended family, but in the darker color if I'm not mistaken. And growing up, my neighbors also had one in their basement. So they were quite popular!

I used mine without the legs most of the time (it did have rubber feet on it), but occasionally I'd use the legs. They were a little wobbly, however.

I remember there was an external speaker connector on the bottom of the cabinet. I think I stuck a couple of small nails in it to try it out.

Only wrapped wire around it since at that point, I hadn't learned to solder yet.

Contributor
I had the least expensive Garrard changer I could get back in 1971. In '78, I was finally making enough money to upgrade and bought a Technics SL-220. That was my last turntable (my ex and I retired vinyl when the kids were little in the mid 90s) .
A

I would like to forget my 1972 dark green General Electric MONO record player which my late mom got me from the old KMart in Saginaw on M - 58. Had that until December of 1979 when it broke!!

Michael Hagerty said:
That was my last turntable (my ex and I retired vinyl when the kids were little in the mid 90s) .
Click to expand...

I'm finding so many records that were never released digitally that I always plan on having one. And ironically, I just traded in my main turntable for a newer one a few weeks ago (SL-1210G)--that took a chunk out of the cost, and a few extra components are leaving soon to cover the rest of the cost of it. I'm still tweaking everything with some accessories (mat, record weight, isolation platform, wood headshell etc.) but hope to be back doing needle drops and posting them to YouTube once I have it all dialed in.
K

I own a Dual 1019. But use it mainly as a single play automatic. Has a Shure M 44-7 mounted. Also have the 78 RPM stylus for it.
You must log in or register to reply here.