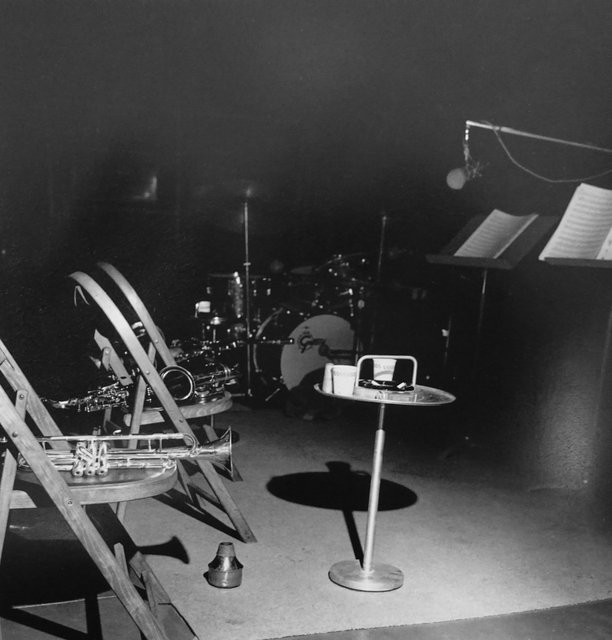 Taking a break during Lee Morgan's Charisma session at VanGelder's.

That's Lee's trumpet (looks like a Martin Committee). The alto in the next chair belongs to Jackie McLean and the adjacent tenor belongs to Hank Mobley.

Quite the spartan set-up: one ash tray that doubles as a paper cup holder; no horn stands. (The great ones require no pampering to create their art.)

Lee had his harmon out, but there is no harmon on any of the released takes -- suggesting he may have tried it on one of the rejected takes.
L

I associate Lee Morgan with the great song "The Sidewinder". I particularly like the Soul Society version of this song released in1968. I discovered this Latin arrangement in 1974 on radio KFMB AM--a terrific MOR radio station. Skip Conover, a great DJ, always ended his KFMB Sunday weekend show with this Soul Society version. Back in those days MOR disc jockeys had the freedom to play songs--sometimes rather obscure-- that weren't hits, but more often than not were far superior than the popular hits of those days. MOR DJs would often dig into their studio's record catalog and play old songs like this one that pleased their musical taste. And for listeners those songs were often great musical discoveries. They were able to do this because MOR program managers were not chained to replaying top 40 hits over and over again that were heard on rival Rock stations.