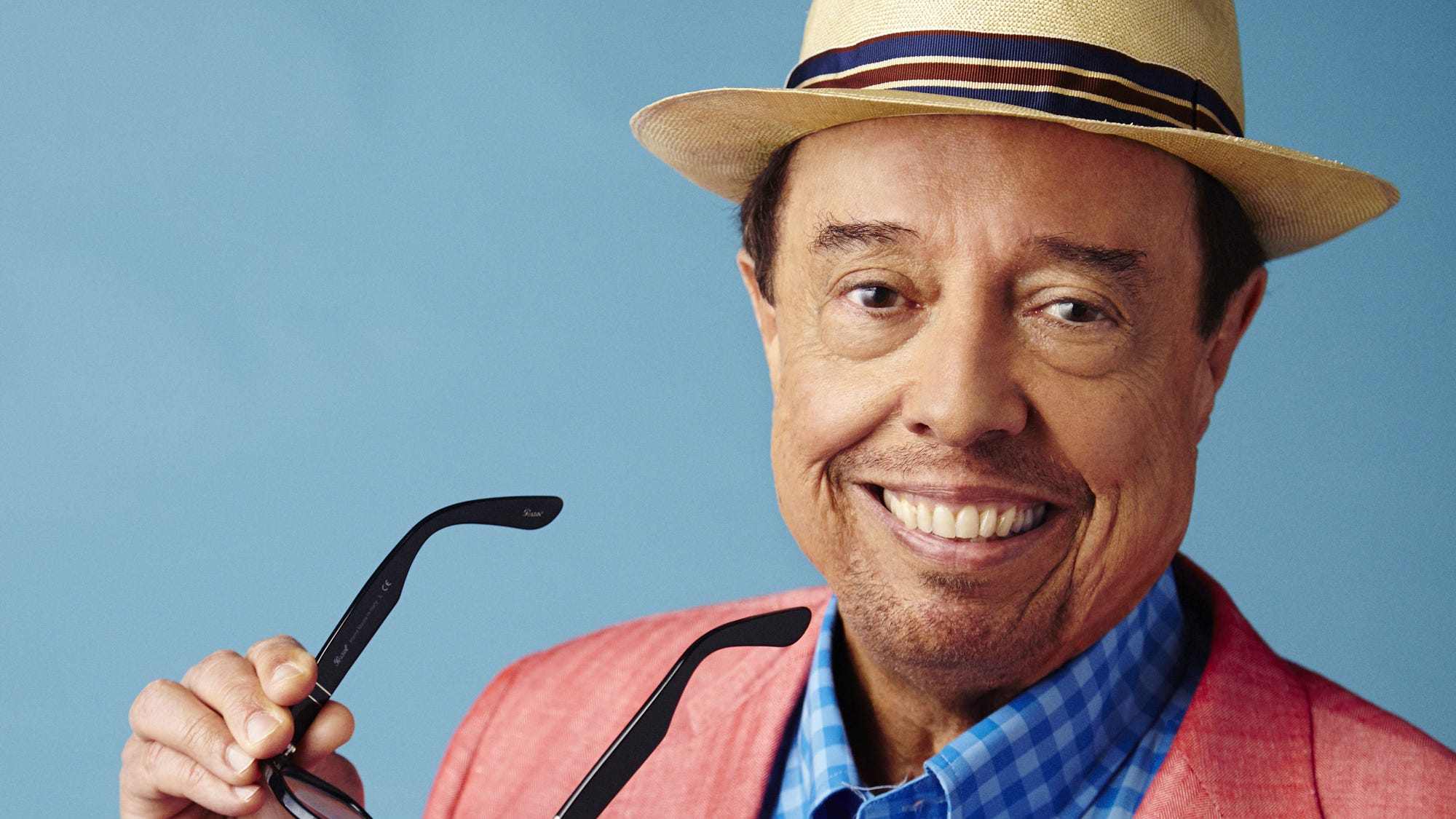 Sergio Mendes on Brasil '66, bossa nova and how 'serendipity' has influenced his career

Sergio Mendes speaks about bringing bossa nova to Carnegie Hall, Brasil '66, his hit "Mas Que Nada" and the documentary "In the Key of Joy."
www.azcentral.com

'The melodies were just so beautiful': Sergio Mendes on Brasil '66 and the bossa nova life


'The melodies were just so beautiful': Sergio Mendes on Brasil '66 and the bossa nova life​


When Sergio Mendes reflects on the amazing journey he calls life, from his formative years at the forefront of a bossa nova revolution through his Oscar-nominated work on "Rio" to the recent documentary on his life in music, there's a word he likes to use.

"Because I think it's the perfect word to describe all those times in my life where things happened that I didn't expect to happen. And they all turned out to be great things."

Start the day smarter. Get all the news you need in your inbox each morning.

The Brazilian bandleader is speaking by phone in advance of an Arizona Musicfest performance Monday, Jan. 31, at Highlands Church in Scottsdale.

How Mendes first came to the U.S.​

It was serendipity that brought the young piano player from Brazil to New York City for a bossa nova concert at Carnegie Hall with Antônio Carlos Jobim, João Gilberto, Luiz Bonfá and American jazz saxophonist Stan Getz in November 1962.

He was 21 at the time and had never been to the United States. Or even left Brazil.

"It was an incredible emotion," he says.

"And meeting all my idols, people that I never thought I would meet, like Dizzy Gillespie and Horace Silver and Cannonball Adderly and Stan Getz. I was in total awe of being there and playing there and all that. It was an amazing serendipity."

He met Adderly at Birdland, where the legendary saxophonist suggested they record together.

Two weeks later, he was in the studio with Adderly, playing piano and contributing a song called "Groovy Samba" to "Cannonball's Bossa Nova."

Born in Rio de Janeiro, Mendes learned to play piano as a child of six or seven. He'd been diagnosed with the bone disease osteomyelitis in one of his legs and his mother felt piano would be good for him.

"I couldn't play ball, or bicycle, none of that stuff," he says. "So when the piano came to the house, it was a joy for me to be able to sit down and play and learn piano. It was the perfect thing for me."

At first, he played classical music. He was 12 when a friend introduced him to jazz.

"Somebody played me the David Brubeck record, 'Take Five,' and I fell in love with that," he say.

"So pretty soon I'm listening to Art Tatum, Horace Silver and all that. And then I put together some trios and quartets and things like that. And then I started playing in nightclubs in Rio."

How Mendes got in on the bossa nova trend​

As he was getting deeper into jazz, bossa nova was beginning to develop in Brazil.

"That whole world of jazz and bossa nova came together," Mendes says. "And I was totally in love with it. That's how it started, really."

To Mendes, the appeal of bossa nova was both obvious and instantaneous.

"The melodies and the harmonies were so different," he says.

"I was playing the Bottles Bar in Rio, where all the musicians used to get together. That's when I meant Antonio Carlos Jobim. And it was fantastic because the melodies were just so beautiful. That turned me on."

Mendes had recorded his first album for Atlantic Records, "The Swinger From Rio," by the time he moved to the United States in 1964.

Unrest in Brazil led Mendes to move to the U.S.​

"In early '64, we had a military coup, and everybody was getting arrested," he says.

"I was arrested also, for a minute, and interrogated because they thought I was a communist and part of the whole thing — blah, blah, blah, the usual military stuff. So after that, I said, 'You know, I think it's time for me to leave.'"

His son Rodrigo had been born that year, which made him even more inclined to get away. So he reached to the best man at his wedding, a Brazilian diplomat, and made arrangements to fly to California with his wife and child.

He formed a group called Brasil '65 and cut two albums released in 1965 — "In Person at El Matador" on Atlantic and "Brasil '65" on Capitol.

Despite the optimistic title of "The Great Arrival," an instrumental album on Atlantic, it wasn't until he hitched his sail to A&M, a independent label launched a few years earlier by trumpeter Herb Alpert and his partner Jerry Moss, that Mendes hit the mainstream.

By that point, Mendes had become quite close to Ahmet Ertegun, who'd seen him playing in a club in Rio and invited him to make a record for Atlantic in New York.

"When Herb and Jerry came to see me here in LA and said, 'We want to sign you. We're starting a label,' it was love at first sight," Mendes recalls. "I said, 'The problem is I have a contract with Atlantic Records.'"

So he called and ran the offer past Ahmet's brother Nesuhi.

As Mendes recalls, "He said, 'Sergio, this is the best thing that could happen to you. I wish I could do what they're going to do for you. But... you still owe me three instrumental records.' Which I did, by the way. It was...."

"This is the last time I'm going to use the word serendipity."

His first release on A&M, "Herb Alpert Presents Sergio Mendes & Brasil '66," which peaked at No. 6 on Billboard's album chart and was inducted into the Grammy Hall of Fame in 2011.

The sound behind 'Mas Que Nada'​

It also spawned a breakthrough single in their sultry reinvention of the Jorge Ben song "Mas Que Nada."

A lot of the magic of those songs was in the vocal blend of Lani Hall and Bibi Vogel.

"I love the sound of two girls singing together," Mendes says.

"So that became my trademark and a sound that I've kept until now. It had the beautiful lyrics that people would understand what we were talking about. And everything combined — the sensual sound of the voices, the freshness of it, all of that."

Suddenly having a hit record was a joyful experience.

"I heard it on the radio.," Mendes says. "We're doing all the television specials. Bob Hope, Danny Kaye, Fred Astaire. Then the tour with Sinatra. It was great."

"Mas Que Nada" was followed by a string of even bigger U.S. hits in 1968 — "The Look of Love" hit No. 4 on Billboard's Hot 100, followed by inspired bossa nova reinventions of the Beatles ("The Fool on the Hill") and Simon & Garfunkel ("Scarborough Fair").

He scored perhaps his biggest U.S. hit in 1983 with "Never Gonna Let You Go," which four weeks at No. 1 on the Adult Contemporary charts.

"It was a few years without really having a huge hit record, you know," Mendes says.

"Then we went back to A&M and had a No. 1 record again with 'Never Gonna Let You Go.' So it was a very nice ride."

It would be difficult, he says, to look back on a ride as nice as that and pick a favorite era.

"Every moment was so beautiful and nice," he says.

"And I don't remember a point where I said, 'Well, I'm gonna give up and go back to Brazil. Because I'm always thinking forward to tomorrow."

He likes to try new things. That's how he came to score a global hit in 2006 with yet another reinvention of his breakthrough single, "Mas Que Nada," this time in collaboration with the Black Eyed Peas.

"I got a call from a record company that this kid wanted to come to the house and meet me," Mendes says.

"And that was Will.i.am. So again, that was another encounter that was fantastic and for me exciting because it's fresh. It's something that I've never done it before."

It was part of an album called "Timeless" that also found him collaborating with Q-Tip of A Tribe Called Quest and Stevie Wonder.

Mendes got to relive many highlights of his life, including classic TV footage from the '60s, when director John Scheinfeld screened his aptly titled documentary "Sergio Mendes: In the Key of Joy."

He hadn't watched the filming of the interviews, he says, "because I felt it would be weird to see people talking about me." So Scheinfeld called him in to see the final cut when he felt it was ready.

"I saw that and I cried," Mendes says. "I said, 'Wow, what a beautiful job he did, putting all that together.' He captured all the moments."