Steve Sidoruk said:
Sergio's IN THE KEY OF JOY will air on NBC Peacock on December 30th.
Click to expand...

The whole thing or the PBS cut?

I think he means, will it be the full unedited version..

Staff member
Moderator
Thread Starter
I know what he meant and the answer is I don't know - the release didn't indicate!

Staff member
Moderator
I watched the doc a few nights ago and enjoyed it a lot. I think I liked it a little better than the Herb doc, although I liked both.

I was a little disappointed (but not too surprised) that they didn't talk about the Primal Roots album at all, since it was such a unique piece of work I was hoping it'd get a mention. When they started talking about Sergio's "cooling down" period in the early '70s I thought maybe they were heading that way, but no. They sort-of skipped over the '70s when it came to the albums.
L

I also have an uncut version of the doc. and I too was disappointed that there was no mention of the classic "Primal Roots" album. They had a nifty video clip of Geri Stevens and Grachina singing "Viramundo" in Sergio's Encino studio. I thought that would have then been a perfect time to segue into mention of Primal Roots which was also recorded in his studio. But alas it was not meant to be.

Which is understandable, I guess. I just keep wishing for more info or discussion on that album and never can find any, except in some threads here.
L

Mike--you are correct--Primal Roots is one of the best kept secrets. We're lucky to have at least this excellent record review of the album per the link below. There is one typo in the review--Dorival not Dori Caymmi wrote "Promessa de Pescador". Dorival is the legendary Brazilian composer and father of Dori. His son Dori turned out to have inherited his Dad's musical prowess. 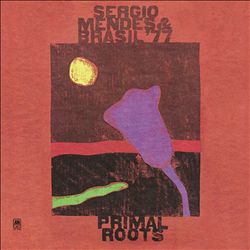 The Sergio doc. did an excellent job covering the Brasil 66 era and was chock full of great TV videos from that period. But through the years I have been equally drawn to the Brasil 77 era on A&M. In my opinion, "Pais Tropical", "Primal Roots" and "Live at the Greek Theater" rank right up there with the best of Brasil 66. For me it was like icing on the cake for Mendes finishing a wonderful stay--1966-1972--at A&M. These years were the summit of his career. It's a pity that the last three Brasil 77 albums went nowhere on the Billboard chart.

Staff member
Moderator
It was no surprise that Primal Roots wasn't a hot seller...although, the first song I heard from it was "After Sunrise," played on a MOR AM radio station.

Staff member
Site Admin
I found PRIMAL ROOTS as a nicely unworn used LP back when I was at work - one of those lunch-hour finds at a used record store in Ardmore, PA. The discussions here led me to look for it, and after having ignored it for so long, I was delighted with how good it was.

A year or so later, the Program Director of our AM station came up to me and said he had a strange request. He said he wanted to find an obscure record for his bride as a little Christmas present and since he knew of my fondness of A&M, he thought he'd ask me. Yes, it was PRIMAL ROOTS that she wanted - apparently she had it years ago in college and lost it somehow. Back at that time (late 90s), the best I could do was to make a good cassette copy. She apparently was thrilled - he, not so much as he wasn't crazy about the deep Afro-Brazilian grooves. He's more a straight-ahead jazz guy.

But I got the impression that he had never even heard OF the album, that's how under-the-radar it was.

I should stop letting curiosity get the better of me. I found the Primal Roots album on Spotify, and streamed it in its entirety. My first impressions are: 1) this doesn't sound like Brasil 66. 2) It's not an easy, or particularly enjoyable listen. 3) I probably won't be listening to it again. 4) I'm glad I didn't spend money on a physical copy, and 4) I've realized that the reason I like the Brasil 66 albums so much, is Lani Hall. Without her in the mix, Sergio's music somehow lost it's magic. For me anyway.

Staff member
Site Admin
As this thread played out, I listened to it again this afternoon. I have the first Japanese CD, and it sounded wonderful to my ears.

It is definitely an album that needs to grow on you. First time I heard it, I was put off, especially by the call-and-response tunes, and I wasn't sure what to make of "The Circle Game." But I always really enjoyed the first two songs (I was taking keyboard lessons when this album came out, and I loved the organ solo on "Promise of a Fisherman," and "After Sunrise" has one of my favorite intros of any song I've ever heard). "Iemenja" was an early favorite as well.

Fast forward to today, and it is one of my favorite Sergio albums.... but I have to be in the correct mood to listen to it, and I need time to hear the whole album in one go. If I had to pick a "least favorite" tune, I would probably pick "Pomba Gira," but I even enjoy singing along to that.

Staff member
Site Admin
I was probably introduced to the first two tracks via FOURSIDER, but knowing my penchant for playing recognizable songs, I probably skipped them most of the time.

Once I started making car compilation tapes, with, in this case, all of the Sergio stuff I owned, I'd get to "Promise Of A Fisherman" and "After Sunrise", include those, and then right into the Bell stuff.

So when I finally listened to the PRIMAL ROOTS album, I knew those first two tracks.

Murray said:
I should stop letting curiosity get the better of me. I found the Primal Roots album on Spotify, and streamed it in its entirety. My first impressions are: 1) this doesn't sound like Brasil 66. 2) It's not an easy, or particularly enjoyable listen. 3) I probably won't be listening to it again. 4) I'm glad I didn't spend money on a physical copy, and 4) I've realized that the reason I like the Brasil 66 albums so much, is Lani Hall. Without her in the mix, Sergio's music somehow lost it's magic. For me anyway.
Click to expand...

I think it also depends on what you're used to listening to. I've gone off on listening tangents and when I've taken a deep dive into Brazilian music, Primal Roots really isn't too much different from others I've listened to (I could say the same for Milton Nascimento's albums through the 70s, for instance). And that music (including this album) isn't something that is easy to get to know without listening to it a few times. An acquired taste, for sure!

Having said that, the original Brasil '66 albums always will hold a special place since I grew up with the first four Brasil '66 albums, so much so that I probably know every note on those records. Although I freely admit that today my favorite Sergio records predate Brasil '66, back when he used his piano talents a lot more--having gained access to those in recent years, they're my go-to for Sergio when I'm in the mood. The Wanda Sa/Sergio Mendes Trio album Brasil '65 is probably my most played Sergio title of all.
L

If the listener is expecting to hear the sounds of the truly classic first four Brasil 66 albums--forget it. Primal Roots verges on a type of Brazilian serious/classical music such as by Villa Lobos. But actually Primal Roots is a perfect example of Afro-Brazilian music--side 1 and Brazilian/jazz--The Circle Game side 2. I would advise the listener to first read the album's liner notes which in detail describe what Sergio successfully achieved. When I first saw the album in 1972 at Sam Goody's record store in New York, I said to myself that this album is certainly something adventurous for Sergio. This album is not for casual listeners. You have to sit down and really absorb all its brilliant nuances. One shouldn't expect to hear a series of Dave Grusin arrangements. For me, the Circle Game is an exciting masterpiece. Sergio's arrangement is one for the ages with remarkable instrumentation starting with the flute, then the guitar and then the piano with vocals ingeniously interspersed. As my brother once said, he wished the song would have never ended. It's easy for me to see why I pretty much disregarded most of Sergio's musical output post Primal Roots.

Staff member
Site Admin
Thinking back to my mindset in 72 when the album was new and in the racks, I know I didn't buy it because I hadn't heard any new Sergio Mendes tracks on the radio, and I think I read something in a trade magazine that the album wasn't for those looking for the poppy Brasil '66 stuff. Those two things were enough to steer me away.

So what would have been my reaction if I HAD picked it up back then? I probably would have given it a listen and then filed it away as just too different from what I was used to. The first two tracks - the ones that later showed up on FOURSIDER - I might have given a secondary listening to, as they are the most like Brasil '66 records.

Back to the documentary, I bought the DVD and enjoyed it a lot. I never got to see all of the shortened PBS version, so having the full film was a treat.

My two cents: it's the only Sergio/Brasil '66/'77 album I file in my "Brazil" section -- between Luiza and Vinicius de Moraes -- and is far and away the finest musical statement he released at A&M. (The balance of his other A&M albums are filed under "pop".) I first happened on the album over 15 years ago when, frustrated and convinced that the US would never issue the latter day '66 and '77 albums, I purchased them from Japan.
L

JOv2--in my opinion your observations are 100% correct. Just when I was ready to buy the Japanese "Primal Roots" CD with the "The Crab" track also included as a special treat, it became unavailable. Fortunately my Primal Roots vinyl album from 1972 is in mint condition. And I have a mint copy of The Crab as a 45 also from 1972.
L

Rudy--I agree--the Brasil 65 album is very special. My favorite tracks-- "Let Me" and "Consolacao"-- are written by the brilliant Baden Powell.
M

Is the Sergio doc still playing on Peacock?

Is it possible to purchase a copy (iTunes store, etc.)?
L

Is it possible to purchase a copy (iTunes store, etc.)?
Click to expand...

If you want the doc on DVD--deepdiscount.com is selling it for less than $20.
T

This is what bothered me. The documentary states that Gracinha replaced Lani as the lead singer, but... País Tropical clearly had Karen doing the english vocals. Actually, Karen did them very well. Primal Roots was a portuguese album, so that is Gracinha - but... when Bonnie joined the group - many english vocals were done by Bonnie.

Staff member
Moderator
The film did kind of skip over more vocalists than not. There could almost be another documentary... The Singers Behind Sergio.
You must log in or register to reply here.

Claims That Karen Carpenter Won Playboy Drummer Poll Are Probably False, But They Shouldn't Be