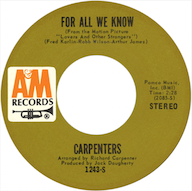 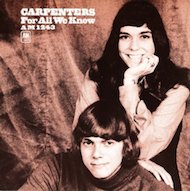 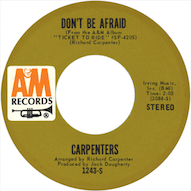 "For All We Know" is just a beautiful, ethereal song. Karen's voice is perfect for the lyrics, and it follows up "We've Only Just Begun" so well. I always thought that "Don't Be Afraid" was a bit odd of a choice for the B-side, but enjoyable anyway. A throwback to the early days.

Staff member
Site Admin
And right after that holiday period in late 1970, two weeks into the new year, Carpenters were ready with yet another monster hit record. "For All We Know" was again played everywhere and added to the mounting list of songs that weren't on the CLOSE TO YOU album. That simply hastened the demand for a new album, which we got later that year with CARPENTERS (tan album).

If I have any reservations at all about "For All We Know", it's the rather closed-in stereo soundstage that it exists in. The basic track is mostly contained in the center, with strings, horns, and backing vocals spread out across the stereo. A sumptuous tune, but not a "demo record" to show off your stereo.

I believe "For All We Know" to be one of the more underrated singles of the early days, sandwiched in the middle of the monster singles before it ("Close to You" and "We've Only...") and after it ("Superstar" and "Rainy Days.."). As much as I love it-- another classic Karen reading in the Carpenters library -- I think this is the one 45 where I play the B-Side just as much, if not more than the A-Side. "Don't Be Afraid" is my favorite cut from OFFERING. The harmonies are groovy!

Think of what "For All We Know" might have sounded like if Jose Feliciano played his guitar on the intro instead of an oboe being there!

This is just one of their most beautiful singles, the background vocals are among the most gorgeous on any of their recordings. Seamless sibling harmony at its best.

The B-side is great fun and was on heavy rotation for me when I first discovered the duo. Innocent, poppy and full of energy.
R

Oh I'm glad you added the number to each of the singles, Chris with this one being #5.

A perfect contempoary song for its time, and since has become timeless for its perfect arrangement that surrounds Karen's perfect vocals. I guess I am using the word perfect as easily as the word groovy was used in the day that is reflected on the flip side. For All We Know shows the soulful side of Karen and the flip side is sunshine pop at its best with awesome harmony on the word love, in both songs; not to mention how much the word love was used in pop culture that year!

For All We Know is one of my favorites and it is the perfect song to play at the end of a day or a playlists!

One of my all time favourites, there is something cyclic and transcendent about this song, and the lyrics are really beautiful. Everything rings true on this track and I prefer it to both Close To You and Begun.

I've mentioned this before, but the first time I heard 'For All We Know' was driving with my parents in the car and playing my new 'Coke' can AM radio I'd just gotten for Christmas. I was blown away by the song, and love it to this day. I didn't get this single, as the store was out of copies when I had somebody drive me there. As events transpired, I didn't get to hear 'Don't Be Afraid' until getting the 'Ticket To Ride' LP in 1972. This single is one of those where the B-side is just as good as the A-side. Sunshine pop at it's shiniest. And the harmonies are incredible.

Thought I'd find the demo version of "Don't Be Afraid"

Chris May said:
“FOR ALL WE KNOW”/"DON'T BE AFRAID"

For more definitive information regarding each single, you can visit our Carpenters - The Complete Singles page in our Carpenters Resource.
Click to expand...

Perhaps it's time to update with 2 of the songwriters' real names....Bread's James Griffin and Robb Royer.

I voted for Don't Be Afraid. It's such an upbeat song full of youth and idealism. It's infectious to hear, so it gets more play than For All We Know at my place. But I do love For All We Know very much as well. I can see why it appears on most compilations, it's a great song.

Eyewire said:
I wonder if Richard kept the tapes with Feliciano's contributions.
Click to expand...

I've always wondered that too!

Many (not all) of the B-Sides are quite a bit shorter-in-playing time
than the A-Side.
Cost-cutting technique ?

Had forgotten this TV-Concert performance of For All We Know--Top Of The Pops 1974,
it is slower (?), a few notes drawn-out longer....a favorite performance of this song...
Song begins 41:10 :

Sticking with Joe Osborne today:
Stories Behind the Songs: Joe Osborn
9. “For All We Know” – The Carpenters (1971)
"This is a perfect example of listening to the song telling you what to play.
Richard [Carpenter] brought in the basic line written out. Karen [Carpenter] was running late,
so we were just running down this track. When she started to sing, all those slides and things around the basic part started to come from the vocal. If she hadn’t come in, it would have wound up exactly as what Richard had wrote.
It was a pretty line, but it didn’t have all those slurs and things. It becomes almost a bass and vocal duet all of a sudden in those spots, and it’s entirely of what she was singing that those licks came."

Why does she sing; "Let's take a lifetime to SEE?" Bugs me each time I listen and it's actually in my Top 5 favorites.

arthowson said:
Why does she sing; "Let's take a lifetime to SEE?" Bugs me each time I listen and it's actually in my Top 5 favorites.
Click to expand...

It’s “say” but that pronunciation has always bugged me about this song.

newvillefan said:
It’s “say” but that pronunciation has always bugged me about this song.
Click to expand...

Normally I'd think the singer was modulating a vowel sound to make it easier to sing, but Karen certainly didn't need that tool in this case. Interestingly, I hear "say" more than "see", not sure why. It might be my mind filling in what I expect to hear.

Many (not all) of the B-Sides are quite a bit shorter-in-playing time
than the A-Side.
Cost-cutting technique ?
Click to expand...

Interesting question. I always figured the B-side was chosen partly because it was a song they figured would probably never become an A-side. It's also been mentioned here that since the songwriters get royalties for every sale of a tune, even if it's a B-side, it was common for a group's resident songwriters to be represented on the B-side of a big single.

I know of two examples where the B-side was much longer than the A -- I think it was Chicago's "I've Been Searchin' So Long" that had the 6+ minute "Byblos" on the flipside. And Grand Funk's "We're An American Band" was backed with "Creepin'" which was also over 6 minutes. I'm sure there are tons more examples of both extremes.
A

For All We Know. Chart facts.

Of all classical music, it's music from the Baroque period I love the most, and I get much the same feeling from 'For All We Know' as I would listening to a slow movement from a Bach concerto, or a Bach cantata.

There's certainly nothing 'poppy' in the song itself, such as a hook or anything designed to deliver a knock-out punch. But Richard knew exactly what he was doing; instead, drawing the listener into the music. There's an almost imperceptible buildup in the emotion as the piece progresses: the constant, delicate heartbeat of the drum; the fascinating dance between voice and bass; tasteful arpeggiation; and an impeccable placing of the various backing instruments and harmonies all leading to the inevitable, marvellously understated climax towards the end.

So many times, after drawing a deep breath, I've thought: 'Wow! What did I just listen to?' I think the answer would mostly be - Richard's genius.

Glen Campbell serenades Lucille Ball with For All We Know:

I guess every composer explores a range of styles and writes for a variety of purposes. Fred Karlin was one of the writers of ‘For All We Know’. How would you describe that song? ‘Sublime...heavenly....majestic.... beautiful....’ I can’t imagine it ever being described negatively. However, I’m glad that Richard and Karen didn’t choose to record ‘Come Follow, Follow Me’, another of Fred’s compositions (with Marsha Karlin), which was actually also nominated for an Academy Award. ‘Come Follow, Follow Me’ doesn’t appeal to me, on first hear, whereas I’ve always loved ‘For All We Know’. Others may have different opinions, of course. The two songs are from totally different types of films, by the way. This song is from a children’s movie.

Nice this threat has come around again, now I get to vote. Definitely Side A. A huge selling point on the song besides Karen's brilliant vocal is Joe Osborn's cascading bass...Love Karen's live rendition of it from the 1971 BBC Carpenters TV Special. What a lovely specimen KC was;