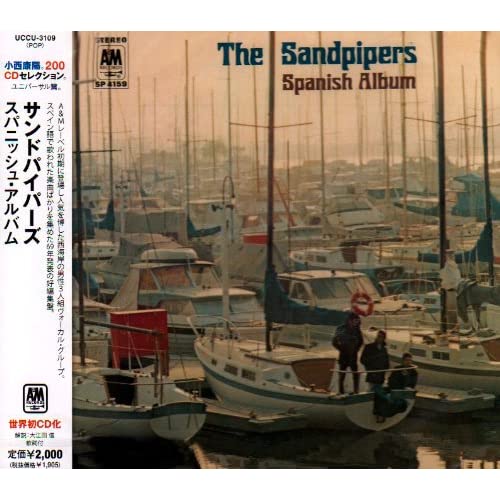 Available on LP, cassette, 8-track. Available on CD from Japan as pictured above and many individual tracks are available from various CDs.

Staff member
Site Admin
Thread Starter
Backing up one place from 4160, FOOL ON THE HILL, is this compilation entry from The Sandpipers called SPANISH ALBUM. This has to be the earliest compilation album on the A&M label and also the first to be aimed specifically at the Spanish market, something that would bubble up several times until the actual creation of the Spanish division, AyM Discos in the '80s.

And the one other "Spanish Song" The 'Pipers would later do (on The Wonder Of You) would be "Lo Mucho Que Te Quiero (The More I Love You)" originally done by Rene y Rene...!

Staff member
Site Admin
Thread Starter
Wow Dave. So sorry to hear about "Kat", forum member from the past. My condolences to you and your family.

Staff member
Moderator
I don't have this one anymore -- this is one of the many A&M albums that I bought during "my 8-track period," but unfortunately it came on one of the infamous "black cartridge" 8-tracks, that were known for getting tangled up. I don't think I ever had one of those tapes that was reliable.

I like all of the songs on this but one thing I really like about it is the cover. First of all, it shows the group -- a rarity on their covers. Second, it's got that "classic A&M" typeface that turned up on quite a few other items from the same era.

Is this the only album where the female vocalist is mentioned in the credits?

Staff member
Site Admin
Thread Starter
I added the credits for Pamela Ramcier - she's not ever listed on any Sandpipers albums that I know of, and that just doesn't seem right, given her contributions to these albums.

Harry said:
Wow Dave. So sorry to hear about "Kat", forum member from the past. My condolences to you and your family.


Harry said:
I added the credits for Pamela Ramcier - she's not ever listed on any Sandpipers albums that I know of, and that just doesn't seem right, given her contributions to these albums.


With regards to her "hidden contributions", particularly on favorite "Cancion De Amor (Wanderlove)" there is a pic on the first Sandpipers album, Guantamera showing The 'Pipers posing w/ two girls on the back cover of some versions... Just wondering if one might have been her... Otherwise, a shame she'd never bee credited & it would be nice to know which albums & songs she'd actually sung on during her time w/ the group...

My first Sandpipers LP I ever owned and still one of my favorites. And a superb sounding recording.

Staff member
Site Admin
Thread Starter
I never knew about the existence of this album until much later, here on the Forum. I recall seeking one out on eBay or something like it and finding one rather reasonably priced. I wanted it more as a curiosity than to actually listen to or use it as a source, since the tracks are available on The Sandpipers' other albums.

I see that England released a second Spanish album from The Sandpipers. Anyone have a copy of that?

Harry
You must log in or register to reply here.

Attention Sandpipers Fans.All of The Sandpipers A&M albums are available as digital downloads