rbisherw said:
My beloved Vandy's were sold a few years ago and replaced with these

Not really "mini" as they are 3 ways, 8" woofer and weigh in about 45lbs each without stands.
Versatile speaker that is not very large.
Click to expand...

Nice setup there! I see the two Mac components.

Yeah, I'm torn on my Vandys. I picked up a pair of 2CEs locally a few years ago locally. A "distressed" sale--they were listed and I responded within minutes. When I got there, it appeared as though the owner and his family were packing up the house quickly and moving out of state. (I smelled "foreclosure.") $300 for them was a steal. Later, someone on AudioKarma sent me a PM noticing that I needed the stands for them, and offered them to me for the price of shipping.

So I'm all into these for only like $350, and it's one of those deals I don't think I'll see again. And that's why I'm reluctant to move them along. If I do keep them, I want to redo the socks and refinish the end caps. My pair was made late in the run of 2CEs, and have the newer tweeters from the 2CE Signature.

I went into them knowing they weren't my "end game." No complaints though--they served me well. I moved up to these from a pair of the Dahlquist DQM-9s. Some of the newer Vandys were appealing (maybe a 3A Signature, or the Quatro or Treo), as was the ProAc Response D48R, although the latter was about $11K new and just a little outside my budget (he says with understatement

). I even considered a Von Schweikert pair that had come up about a month ago (VR35 Export).

But I've been wanting to get a Martin Logan system for decades, going back to the CLS-II (late 80s), I've had searches in place on HiFi Shark and US Audio Mart for years, watching specifically for the Summit, Summit X or Spire models. And I saw a pair of Spires come up two months ago. Oddly the price increased by 10%. A week and a half ago on a Saturday, I noticed the price had dropped below the original asking price to a low figure I hadn't seen on these.

It took me only a day to decide on it, and despite them being 600 miles away, I had to get them. The pair is several years old, but they look and play brand new. It only took me 33 years to get to this point.

And yes, there's a lot of other components headed out the door in the next few months, which is how I manage to stay ahead of this pursuit.
Last edited: Mar 10, 2020 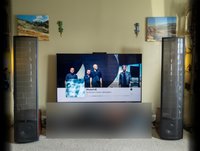 (Roon remote display on the TV.)

Staff member
Site Admin
Got these in on a long-term loan. Primarily they'll be on my desktop, but I'm looking around to set up some temporary stands so I can give them a try in my main system. KEF LS50s. They are very heavy for their size, but the cabinets are so inert that you can barely feel any vibrations through them. 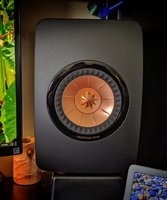