Thread Starter
Staff member
Site Admin
This was released on the Orfeon label in Mexico. I only just stumbled across it on a lark via YouTube. 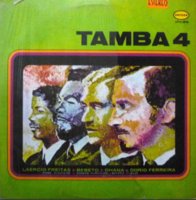 I don't have a copy (too expensive, only available in Mexico at the moment), but you can listen to the entire album here:


It does have some of the Tamba 4 elements, but, it does not include any participation by Luiz Eça. And it's evident--it has the vocal harmonies, but the piano work is missing his flair, and the record sounds a lot more commercial than the purer Bossa Nova/jazz influences from the earlier Tamba Trio albums. It's an interesting album if not essential. And it's the only other time the Tamba 4 name was used--the band usually went by the name Tamba Trio.

Staff member
Moderator
Looks like that was released a couple of different ways. The A side on the YouTube version is the B side on some other issues. According to Discogs, there was a CD issued too, and I'm suspecting that the YouTube video might BE that CD, as there are no scratches in vinyl to be heard. It was probably poorly mastered, maybe even originally.

Interesting find though. Still not an album with "California Soul" though.

Thread Starter
Staff member
Site Admin
It's an interesting find for sure. I have another couple of Orfeon records and they also have an odd sound to them (the Perez Prado LP sounds kind of bright). It could be that the engineering was never all that good.

The only CD version of"California Soul" on CD that I know of is on a compilation. I haven't yet checked to see if "Berimbau" shows up anywhere. I don't even know if a full album's worth was ever recorded (despite anything I've seen online in the past). The Japanese A&M would probably have unearthed it by now if that was the case. Or then again, Universal finally admitted that hundreds of thousands of masters were lost in their 2008 fire, so it's could be lost forever anyways.
You must log in or register to reply here.
Share:
Facebook Twitter Pinterest Email Link
Top Bottom