Thread Starter
Staff member
Site Admin
Genesis playlist while working this morning...this album, plus Trick of the Tail, Wind and Wuthering, and Duke. 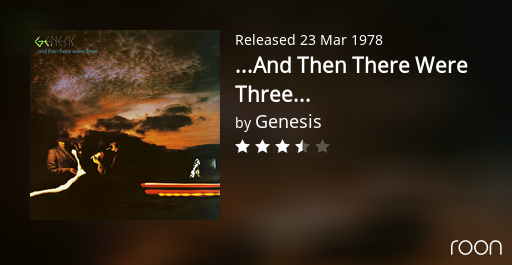 Nice thing about queuing up the albums--I can knock a few track out of the queue that I don't care for. For Wind and Wuthering, I knocked out all but three of the tracks. 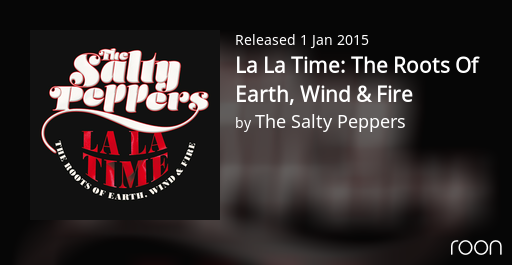 This via Qobuz (and I've been meaning to buy it, in case it disappears). Essentially it was a group Maurice White co-founded in Chicago (with Don Whitehead and Wade Flemons) while working as a session drummer for Chess Records, and playing in the Ramsey Lewis Trio. Maurice issued "La La La" as a single on his own label imprint (Hummit Records), then leased it to Capitol, who later released "Uh Huh Yeah" b/w "Your Love Is Life." Once Maurice left Chicago and Ramsey Lewis, he shopped demos around the labels and the group evolved into the first incarnation if Earth Wind & Fire. "Your Love Is Life" would appear re-recorded on their self-titled debut album for Warner Brothers. You can definitely hear the early influence in the original version:

Thread Starter
Staff member
Site Admin
Here is an interesting interview of the "other Gino" from Montreal--Gino Soccio, who created a few unique albums during the late 70s and early 80s, then hung it up. I hear a lot of his influence in a small handful of artists even today--it was a spare production technique, and had a lot of hypnotic elements to it.

Gino Soccio was the one-man-band behind countless disco gems—until he vanished.
www.waxpoetics.com

This wasn't one of the big hits (which were "Dancer" and "Dance To Dance"), but a great album track.

Ooooh the hypnotic electronic music of the disco days. I had the vinyl, but now just the cd. Good fun.

Thread Starter
Staff member
Site Admin
I still have my vinyl copy after all these years, but do have the CD version also. (I had to rearrange the tracks I ripped since they changed the running order.) I didn't realize until I read the article that he was from Montreal--I always figured he was from Europe, as his sound was similar to a lot of the dance music being recorded over there (anything from Kraftwerk to Giorgio Moroder). s

Giorgio Moroder is my favorite of all the electronic composer and producers. His solo albums, Munich Machine, Giorgio & Chris (Whiter Shade of Pale) soundtracks, Donna Summer, and tons more. I really like his work with model/singer Madleen Kane. Also with Sparks and Freddy Mercury.

Others that I liked were Cerrone, Patrick Juvet, Arpeggio, and Alec R. Constadinos. Eurodisco.

Thread Starter
Staff member
Site Admin
Donna Summer's "I Feel Love" is one of my favorites of hers, for that reason.

Mine too. To hear it in a really huge night club with that trance bass pounding was amazing. I think I have over 20 mixes of that song. One of my favorites is Donna vs. New Order I Feel Blue Monday blended together.
A

Just got Leo Sayer "Selfie" (first album since 2008) & its his best effort since the late 70's which I got from itunes!! Matt Clark Sanford, MI

GDB2LV said:
Giorgio Moroder is my favorite of all the electronic composer and producers.
Click to expand...

In America, disco was declared dead, crushed under a steamroller, and all but forgotten. Apparently, Europe never got the memo!

I love this song from Giorgio's 2015 album "Deja vu"... I wish that Giorgio and Kylie would have made a whole album together.

Murray said:
In America, disco was declared dead, crushed under a steamroller, and all but forgotten. Apparently, Europe never got the memo!

Have you heard ABC's The Lexicon of Love II? "Viva Love" and "Flames of Desire" still have that same beat. So the UK never got the memo either.

Rudy said:
Things I learned. How to operate a Hammond B3:

The name of Phil Collins’ latest tour - “Still Not Dead Yet.”

Staff member
Moderator
I've been listening to the "Alan Parsons station" at work on Amazon Music Unlimited lately...they are featuring a lot of songs off of a Roger Hodgson album I'd never heard of, Open The Door, which came out in 2000. Sounds like his work with Supertramp at their prime.

Speaking of Alan Parsons, his new album The Secret is really good, maybe a little mellower than his classic work but still catchy. It's a return to his "classic" sound after an unsuccessful attempt at an electronica album 15 years ago (A Valid Path). There's even a couple of songs with the instantly-recognizable Ian Bairnson on guitar. And a killer ballad featuring Foreigner's Lou Gramm on vocals.
A

Also if you like Alan Parsons, singer David Paton (of Pilot 1975 "Magic" fame) has not 1 but 2 things on itunes including "A Pilot Project" (2014) & "The Traveler: Songs Of Alan Parsons" from this year. Matt Clark Sanford, MI

Rudy said:
Have you heard ABC's The Lexicon of Love II? "Viva Love" and "Flames of Desire" still have that same beat. So the UK never got the memo either.

Although I'm not familiar with those 2 songs my favorite songs by ABC are their similar sounding hits " Be Near Me" and their later Motown Sounding hit "When Smokey Sings".Just two of those songs take me back to my Happy Days ( When I was much younger)

Bobberman said:
Although I'm not familiar with those 2 songs my favorite songs by ABC are their similar sounding hits " Be Near Me" and their later Motown Sounding hit "When Smokey Sings".Just two of those songs take me back to my Happy Days ( When I was much younger)
Click to expand...

You may like The Lexicon of Love II, then, as it's very much in the same mold as the original, without being stale. The lyrics approach the same ideas, but from a middle age perspective. (I wouldn't call it a follow-up...more like a sequel.) I couldn't find the tracks on YouTube, other than in live versions. Martin Fry still sounds the same as he does back in the early 80s, also.

Thread Starter
Staff member
Site Admin
Some new black discs came in for the wrecka playa. (They come from the online wrecka stows.)

This first one needs a little introduction. At AXPONA this year, I picked up the Bartok Concerto for Orchestra reissue that was released by Analogue Productions a few years ago. This was on one of the Living Stereo SACDs combined with the following record, Music for Strings, Percussion and Celesta/Hungarian Sketches. Until I looked on Discogs, I did not notice that it had ever been reissued on Vinyl. It was cut by our pal Bernie Grundman and released on the now-defunct Classic Records label. This is one of the best sounding classical records I own, and it was recorded 61 years ago (during late December of 1958). 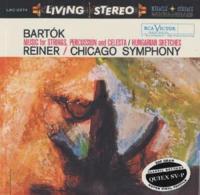 Also in RCA land, I found this one sealed via another Discogs seller. It has never been reissued on CD, except for a grey market import made from a poor needle drop (in a two-fer with Esquivel '68, which also hasn't seen an official CD release). It's nice to have a clean copy of this one, and going back 20 years or so during the lounge music fad, this might have fetched over $100 in sealed condition. Much cheaper today, thank you very much. 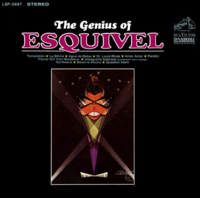 It is actually the US version of the album originally released in Mexico, which I already own in its mono version (and not as clean, of course): 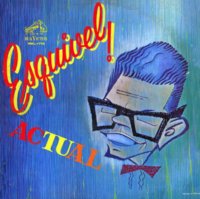 And this was a sealed copy (there are plenty out there) of one I stupidly sold/traded when I bought into Sony's "perfect sound forever" farce.

It's nice to have it back. I got this and a couple of other Robert Plant 12" singles that were dirt cheap ("Little by Little", and "Tall Cool One"). 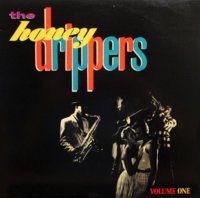 This one wasn't sealed, but looks clean. Flora Purim has sung on many other Brazilian artists' albums, as well as singing and playing percussion on the first two Return To Forever albums (with Chick Corea). It is on the Milestone label, part of the Fantasy family, same label that Azymuth's Outobro album was originally released on. 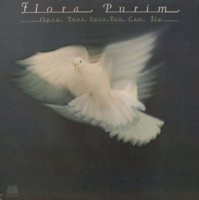 Thread Starter
Staff member
Site Admin
A classic! Vince Clarke was one of the founding members of Depeche Mode, who departed to create two albums with Alison Moyet in Yazoo, then went on to form the synth-pop group Erasure which had its own string of hits over the years. 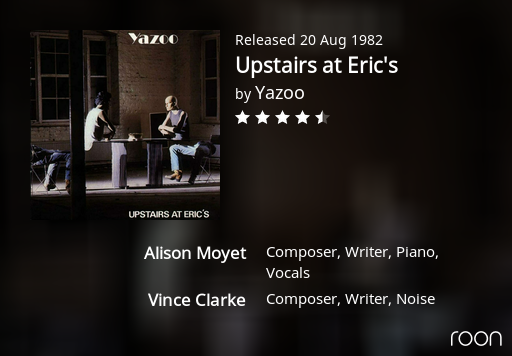 Thread Starter
Staff member
Site Admin
Finding Gabriel is a rather unusual new recording. Brad Mehldau is known more for acoustic jazz, often in a trio format, and I came across him by way of the two recordings he made with Pat Metheny, Metheny/Mehldau and Quartet. This one finds Mehldau exploring new sounds with the Rhodes electric piano and a couple of analog synthesizers, along with wordless vocals and occasional strings and horns. Stylistically it is all over the place, which makes for a lot of interesting listening here. 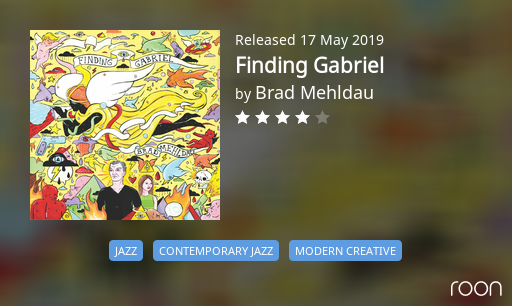 In America, disco was declared dead, crushed under a steamroller, and all but forgotten. Apparently, Europe never got the memo!
Click to expand...

Kind of funny how disco is dead, but it never really died. Just the WORD "disco" died, along with the style of arrangements. You don't hear the lush orchestras or the wakka-wakka guitar anymore, but virtually everything else in disco is present in today's "dance" music.

Thread Starter
Staff member
Site Admin
They did at least get away from the constant four-to-the-floor bass drum beat. One interesting thing I noticed is that some of the most popular tunes did not have that beat. "Le Freak" by Chic does not have that beat. Neither does Chic's arguably best-known hit, "Good Times". Most of the hits by KC & The Sunshine Band did not have that beat either--they were unfortunately lumped into that same label even though they weren't really a part of it. They were based in Hialeah, Florida (Miami-based, in other words) and their sound grew out of rock and the junkanoo music of the Bahamas (junkanoo is to Bahamas like the samba is to Brazil--a rhythm and music played during celebrations and festivities). Earth Wind & Fire only had one song with that beat, "Boogie Wonderland," and Maurice chose to approach the whole genre in an ironic way with the lyrics--it is actually a darker song than most listeners realize as it's about the downside of the "disco lifestyle."

One aspect of disco is that much of it was based on studio creations by producers and studio musicians. In other words, the "group" was just an idea (and name) for a concept by a producer. Labels like Casablanca cashed in on it in a big way, which also precipitated the label's downfall when the whole movement collapsed. That's where you'd find a lot of the violins and stuff.

The guitars with the wah-wah pedals were a product of the 70s for sure.

The Isaac Hayes tune "Theme from Shaft" and Barry White's Love Unlimited Orchestra "Love's Theme", both #1s, featured it. I think even Chuck Mangione's "Feels So Good" utilized it.
You must log in or register to reply here.
Share:
Facebook Twitter Pinterest Email Link
Top Bottom