Staff member
Site Admin
Thread Starter
Jeez...you think modern day A&M would have been that clever to reproduce an innersleeve for the image beneath the tray.

Staff member
Moderator
That is so amazing, Harry!

Staff member
Site Admin
Thread Starter
I have been listening to some Tamba Trio-related albums.

One I didn't particularly care for was by Quarteto em Cy, a Brazilian female vocal quartet. Tamba Trio backed the girls on this record, and Luiz Eça did the vocal arrangements as well. I think it's the vocal style that doesn't appeal to me. 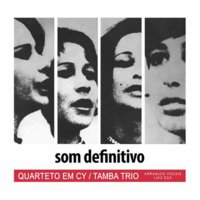 Tamba Trio backed Edu Lobo on his debut album, although this tune, "Zambi" (one of my favorites on the record) is nothing but his guitar accompaniment to his vocals:


The same track by Quarteto em Cy loses something along the way.

Staff member
Site Admin
Thread Starter
I'm not exactly in terror from listening to this just yet. Side one is more like cocktail jazz. The real meat of the soundtrack happens on side two. 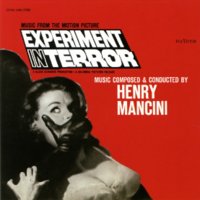 Streaming in hi-res via Qobuz. I haven't heard this album sound better on digital--they mastered this one quite well, as they did the other Mancini titles.

Staff member
Site Admin
Thread Starter
This was a Bill Evans album I overlooked--I just found a copy of it since I realized that he covers Luiz Eça's "Dolphin" on it:

Rudy said:
I'm not exactly in terror from listening to this just yet. Side one is more like cocktail jazz. The real meat of the soundtrack happens on side two.

Streaming in hi-res via Qobuz. I haven't heard this album sound better on digital--they mastered this one quite well, as they did the other Mancini titles.
Click to expand...

I have this on a CD from Spain: 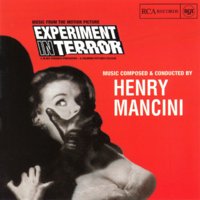 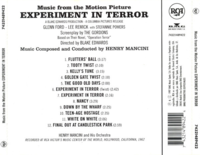 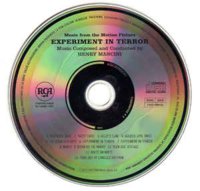 I bought it when I discovered the movie itself and really liked the music score.

Staff member
Site Admin
Thread Starter
I have that same CD--BMG Spain was the only label that released so many of Mancini's titles. That program was run by Jordi Pujol and I used to order those from the college bookstore at USC, since they were the only source in the mid 90s where we could find them. Sound quality was never all that good, and some stereo titles were in mono--it was no fault of BMG Spain as they had tried to get BMG in the US to loan out the tapes for remastering but they wouldn't release the tapes...so Spain made do with their copies on hand. Still, it was the only way to get those digitally.

I had previously gotten this soundtrack on Living Stereo vinyl--it was somewhat rare back when I bought it, and it was a bit pricey since I found out it was pressed from the first stampers made (1S stampers, on both sides). It of course sounds excellent.

I later discovered the film and have enjoyed it quite a bit. 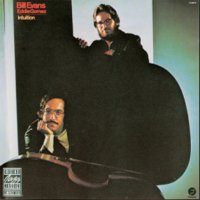 Intuition is a duet album with Evans on piano and Rhodes, and Eddie Gomez on bass. Gomez was with Evans' trio for many years, and I believe this was their only album as a duo.

This next one was a 1964 recording, with Larry Bunker and Chuck Israels: 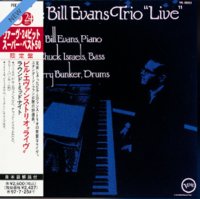 Playing The Ventures "Jim Croce Songbook" (1974) & the late Jerry Reed "Sings Jim Croce" (1980) which I downloaded from itunes. My late dad loved Croce's music including "I Have To Say I Love You In A Song" which was his favorite.

AM Matt said:
Playing The Ventures "Jim Croce Songbook" (1974) & the late Jerry Reed "Sings Jim Croce" (1980) which I downloaded from itunes. My late dad loved Croce's music including "I Have To Say I Love You In A Song" which was his favorite.
Click to expand...

Bobberman said:
I own the CD version of The Ventures Jim Croce songbook in a 2 fer which also has the album "The Ventures play The Carpenters" which I also enjoy too great Instrumental covers very well done
Click to expand...

It was a couple of decades ago, but did you ever get that Surfin' Senorita CD that had all the TJB remakes done in surf style?

Rudy said:
It was a couple of decades ago, but did you ever get that Surfin' Senorita CD that had all the TJB remakes done in surf style?
Click to expand...

Bobberman said:
No unfortunately I never heard of that particular one until very recently I haven't even heard any music from it sadly but it sounds like one worth looking for
Click to expand...

I think it was on a small independent label--it's been so long, I've forgotten. I'll have to look into it again... In fact, I hope that's the correct title for it!
A

Check out The Ventures remake of Herb Alpert & The Tijuana Brass "The Work Song" (from 1966 "Wild Thing"). They also do "The Lonely Bull".

AM Matt said:
Check out The Ventures remake of Herb Alpert & The Tijuana Brass "The Work Song" (from 1966 "Wild Thing"). They also do "The Lonely Bull".
Click to expand...

GDB2LV said:
He was quite popular back in his era and time. Was married to one of the King sisters from the King Family. They were 4 sisters, the King Sisters, that sang great harmonies together. They had a huge extended family, their children were known as the King Cousins. They all had albums out in the 60’s. There are a couple of DVD’s available too. I remember watching them on tv every year. Fun to play at Christmas Time.
Click to expand...

Gee, I remember Alvino Rey and the King Family. They were everywhere for some years there.

DeeInKY said:
Gee, I remember Alvino Rey and the King Family. They were everywhere for some years there.
Click to expand...

Alvino Rey was a very important figure in the history of the guitar. Everyone seems to remember him for his pedal steel playing, but he did a lot more than that. He started out as a banjo player, and electrified that instrument in the mid 1920's. He was also instrumental in developing the Gibson electric guitar, designing a special pickup for it.

Rey also invented an early version of the "talk box" in the late '30's that utilized a carbon throat microphone(developed for AAF pilots) that was worn by his wife Luise King offstage. She would sing the words along with the guitar lines, and the effect was that of a singing guitar. Rey constructed a character known as "Stringy" that could be manipulated into appearing to sing the resulting notes. If you want to see this in action, check out the movie "Jam Session" on YouTube.

Rey also played with some heavy hitters such as Horace Heidt and Neil Nefti. He led his own orchestra, and the steel guitar made for a unique sound. A well-known recording was the theme from the TV show "The Bat". It's definitely worth a listen.

One member of the King Family was Arranger Producer and Musician Lex DeAzevedo ( born Alexis King DeAzevedo) who back in the 80s was one of the several Artists Who produced Custom Easy Listening music programming for Bonneville and also did a one Jazz/New age album titled "Mountains" in 1991 his easy listening instrumental music is still avalible for downloading as part of The Surrey house music "Radio Recordings Collection" I have almost all of them and There are some memorable covers of just about every radio hit imaginable done in unique arrangements yet they retain the spirit of the original tunes Mr DeAzevedo really had a gift for arranging and I've been listening to his Surrey house recordings a lot recently along with all the others in the series like Nick Ingman Pat Valentino. John Fox. Simon Park. And a few others. 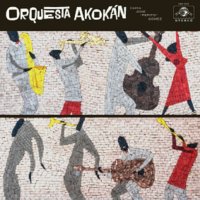 I mentioned this one last year. It's a great record for fans of mambo circa 1950s, plenty of the influence of Machito and especially Perez Prado throughout this record, with modern charts. An interesting listen.

Staff member
Site Admin
Thread Starter
So there's a series of compilations of music from the Balkan states that has had some underground popularity: 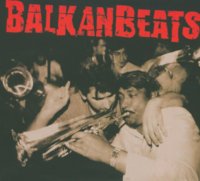 This particular set (yes, there are more than one Balkanbeats sets...I don't know if that's a good or bad thing

I can't help but laugh uncontrollably at the video, in all its dated, amateur and unintentionally funny charm


Aside from the video, Magnifico seems to be a rather diverse musician who pulls in influences from many musical styles. A remake of "Hir Ai Kam, Hir Ai Go" from a later album was rearranged as a country-themed tune.

Staff member
Site Admin
Thread Starter
I kind of overlooked this Bill Evans album--it's one of many that are forgotten among his other Riverside recordings like Waltz for Debby and Live at the Village Vanguard. It was recorded during the sessions that produced the quiet ballad-based Moonbeams album, but How My Heart Sings! is more uptempo and lighthanded. It's a nice companion album. Notable about both of these is that these are the first sessions following the loss of bassist Scott LoFaro in an automobile crash. Drums are still Paul Motian, and Chuck Israels replaces LoFaro here. Evans wouldn't settle in with another bassist at length until he joined up with Eddie Gomez on many albums that followed during his stint at Verve. Still, Israels sits in nicely and this makes for some great musicmaking. 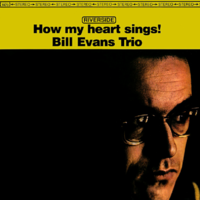 I think my admiration of Bill Evans' recordings is due to his very lyrical approach to playing--if you really listen, you can get absorbed into his work on the piano, and admire the telepathy among the trio. Yet as background music, it also works admirably--it's easygoing, relaxing, and still catches your attention with occasional licks.
A

I do have the original RCA Victor 1977 (reissued in 1989 on CD) copy of "The Best Of Roger Whittaker". The song "Dirty Old Town" is the only song that I do NOT like (which was also done by Rod Stewart on 1969 Mercury "The Rod Stewart Album"). The song "I Don't Believe In If Any More" went to # 26 (Billboard's Adult Contemporary Charts) in August 1970. Then return to the AC Charts (same song) & went to # 10 in October 1975!! Also his second biggest hit behind "The Last Farewell" in 1975. The song "I Don't Believe In If Any More" reminds me of Northern Michigan's wilderness roads as well as the Upper Penisula!! Here is a performance (lip sync):

Staff member
Site Admin
Thread Starter
Tonight I had a few hours with the turntable going...

For some reason, I'm having trouble remembering if I ever owned Paul Desmond's From The Hot Afternoon in its AM+ version. I swore I did, but I can't find it anywhere. I've had two CD versions of it, but I clearly remember compiling some of my AM+ records on a tape back in the mid 80s. My mother had it in its original A&M/CTi pressing, along with his two other A&Ms. I'm going to have to watch closely for a sealed copy.
You must log in or register to reply here.