The J. Geils Band final album from late 1984 "You're Gettin' Even, While I'm Gettin' Odd" (minus lead singer Peter Wolf) failed to chart. They made 1 more song with the movie theme called "Fright Night" in May of 1985 but that was it.

Thread Starter
Staff member
Site Admin
Peter Wolf split from Geils after this album, and both of them fell into somewhat obscurity. Wolf had a minor hit with the first track on his solo album, but I can't recall anything Geils did after Freeze Frame.
A

The late J. Geils did a blues album a while back. Peter Wolf best solo album is 1998 "Fools Parade"!!
A 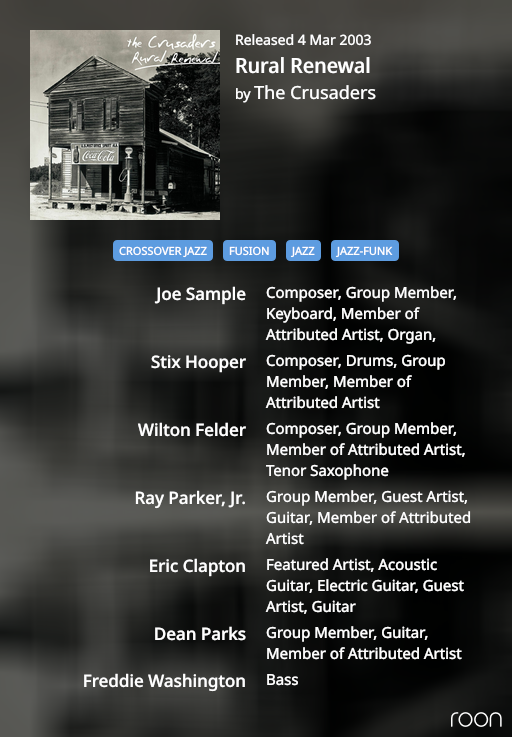 Staff member
Moderator
What a strange coincidence. A little backstory: I don't believe The Crusaders is exactly "my kind" of music. I could be wrong about that, though. The fact is, until yesterday, I don't believe I've ever heard a note from them.

Going way back here at the forum, though, I can recall discussing RISE and its tracks, and one song that never did anything for me was "Street Life", and anytime that song was mentioned, someone would bring up The Crusaders.

Yesterday I was re-reading a thread I posted about a review of "Rise" the song and how it got to number one. It was posted earlier this year. So while reading, I started playing the RISE album on my computer. I left it playing and was enjoying it until it got to "Street Life". As I said, that song never did anything for me as a track on RISE, so it's seldom been played. And even yesterday, I began recalling the name of The Crusaders as it's been often mentioned here. In the older days, I would have had to go out and buy a record to hear it. Today, it's just a matter of calling it up on YouTube, so that's what I did.

The song "Street Life" by The Crusaders, I can say, is one that I never would have run across in my normal listening habits, but I found myself enjoying the groove that it had.

Now just another little coincidence. It's about a movie and its soundtrack - but it does tie in here, so bare with me. About a month ago, while sitting home during our little break from the world, we'd been watching a lot of movies that we've seen before, but perhaps not in awhile. One of those, mentioned in the prior page of this thread, #1686, is THE COMPETITION. After watching it, I found the soundtrack LP in our collection and decided to needledrop it.

As in many movies from the 80s, the end credits music was taken over by a power ballad in an effort to create a hit record. So rather than Prokofiev or Beethoven, the credits rolled with a song called "People Alone". It was sung by a lady I'd never heard before with a very distinctive voice. And yesterday as I listened to "Street Life", I immediately recognized Randy Crawford as the vocalist on that hit too.

So that's my long-winded story and I'm sticking to it.

Thread Starter
Staff member
Site Admin
Randy Crawford's career was made by "Street Life." The original album version of that track is eleven minutes long, and our local stations played that version of it most of the time. It's one of those tracks that is so easygoing that the eleven minutes tick by much faster than you'd think. It did make a few waves on the local jazz station but even the R&B stations were picking it up. It's not "purist" jazz by any means, and many don't feel it's the Crusaders' best work, but I still like this track since it covers so many styles, and highlights Crawford really well.

If you like this track, Joe Sample's solo recordings, especially those like Rainbow Seeker and especially Carmel (a musical impression of Carmel-By-The Sea and Monterey), are very easygoing "lite jazz" that have a wider appeal and some strong melodies. They go down easy like "Street Life" and some of the other tracks from that album. Sample could play in more traditional jazz style (as he did in the 50s and 60s), but he became known for this style of music beyond the Crusaders.


Bobberman said:
I was listening to Their Rhapsody and blues Album earlier today it's sad how the Crusaders Ended and the Big Fallout between Wayne Henderson and Joe Sample in the 90s when sample refused to be part of the Jazz Crusaders incarnation of that time
Click to expand...

There was a split where Sample and Wilton Felder recorded as The Crusaders in 1991 for GRP, yet Felder and Henderson were billing themselves as the Jazz Crusaders (against Sample's wishes) when they played together. Henderson was the only holdout for Rural Renewal unfortunately, and it would have been cool if Larry Carlton had joined that album also, which would have been the lineup circa Free As The Wind.

Staff member
Moderator
Like Harry, "Street Life" off Rise was an okay song. It didn't do much for me, though I never "skipped" it. ("1980," "Rise," "Rotation" and "Aranjuez" were my favorite cuts). Then I'd say within the last 10 years or so, as I explored more jazz and found myself enjoying Joe Sample, I gave The Crusaders version of "Street Life" a go, as I knew Herb's was a cover. I found myself really enjoying it. I know during my Navy years a lot of my black roommates or shipmates had a lot of "soul" or "black jazz" as some of them called it and realized I HAD heard it many times in prior to giving it a go on my own. Being a Navy photographer, the dark room is where we usually played our music without interference. I discovered a LOT of new (to me) music in those pre-digital photo days!

Thread Starter
Staff member
Site Admin
I knew the Crusaders' version before Rise ever came out, and the Rise version has never warmed to me, even to this day. The Crusaders version is very smooth and easygoing, whereas the Rise version seems choppy and awkwardly funky (for lack of a better explanation). The real irony is that Joe Sample plays on that track. Even all these years later, I still skip it half the time whenever it comes up.

But I do like "Love Is," especially since I know now how much Herb's version sounds like the one Bill Withers did on his 'Bout Love album. (The trumpet on Withers' version might have been what sparked Herb to cover it.)

Rudy said:
But I do like "Love Is," especially since I know now how much Herb's version sounds like the one Bill Withers did on his 'Bout Love album. (The trumpet on Withers' version might have been what sparked Herb to cover it.)
Click to expand...

Wow Herb Really took this song and made it his own. Stayed true to the original yet added More Trumpets thanks Rudy for giving me a listen to this I still love this song

Staff member
Moderator
"Angelina" is a Rise song I'd like to know more about... Has anyone heard another version? I suppose I should/could Google it, LoL. I enjoy that it is one of the few times Herb has ventured into a "country" sound on a tune...

Staff member
Moderator
I have three iterations of the RISE album on my computer, the old A&M CD, the Shout CD and the latest Herb Alpert Presents CD.

I was just looking at the track listings of these three and found an oddity. Now, I know that the Shout issue jumbled up the order by flipping "Aranjuez" and "Street Life". I've got that.

But in looking at my HAP version online, it had the same jumbled order, and yet the HAP CD uses the original order. Did Windows somehow juggle the track order? Did I accidentally rip the wrong version? Did I intentionally flip the two (not likely as an originalist)?

I don't know. But I've deleted the old album's tracks and am re-ripping the HAP disc properly. One annoying thing is that no matter which version I rip, the image of the Shout disc shows up.

I’ve noticed that iTunes often gives as many as 3 choices for the same cd. The Gracenote people get different information from users, and you just hope you choose the right version when you start to rip the cd. That happened in June when trying to rip the Chris Rea The Works” collection on Rhino Records. Not that many made. Not sure if that’s what you’re using. It’s a gamble on many lesser commercial or limited releases I’ve found. Anyway that’s been my experience with them.

Thread Starter
Staff member
Site Admin
I have had to correct album art in Roon, and I believe they pull some of their data from Gracenote as well. I'm able to edit albums or tracks (even by retrieving better art from elsewhere or uploading my own), and I can also ignore the online data and use the track info in my files (which in most cases is correct).

I never did buy the Shout version of the Rise reissue, so I don't have the incorrectly-ordered tracks.

I love this one too now all the cover tunes on Rise have been ( if you will pardon the redundancy) Covered .Haha I knew Angelina was a Heartfelt love song even without the lyrics and hearing the lyrics to me Confirmed it. It's a great song

Thread Starter
Staff member
Site Admin
"Aranjuez" and "Behind The Rain" are my two favorites on Rise.

Staff member
Moderator
I'd add "1980", but yeah, those are great along with the title track.

Staff member
Moderator
Interestingly (after a little additional research), "Angelina" was written by a Procol Harum member and a King Crimson member. Procol Harum was an A&M artist, and Crimson has an A&M connection through Robert Fripp and his two LP collaborations with The Police' Andy Summers...

What else can I say Except " I Love all the songs on "Rise" and as I said before Herb's Great comeback Justified my appreciation for his works in the midst of a Severely prejudiced culture of Other Kids who dismissed him as Old Fogie music Oh Well, What did they Know?

Mr Bill said:
Interestingly (after a little additional research), "Angelina" was written by a Procol Harum member and a King Crimson member. Procol Harum was an A&M artist, and Crimson has an A&M connection through Robert Fripp and his two LP collaborations with The Police' Andy Summers...

Angelina reminds me of a song off of Kris & Rita's Full Moon album, A Song I'd Like To Sing. Herb wails away on the final chorus, and sounds like he was having a great time while doing it. I was in college when this album came out(1973), and it was a staple on my Dan Bolton's Ear Show every Monday night on WICR FM.

Those were the days...
A

Someone mentioned The Hardy Boys "Wheels" from 1970, here is Canadian trio The Stampeders "With You I Got Wheels" (from 1971 "Against The Grain" in Canada & "Sweet City Woman" album in U.S..) (audio only & album track):
You must log in or register to reply here.
Share:
Facebook Twitter Pinterest Email Link
Top Bottom