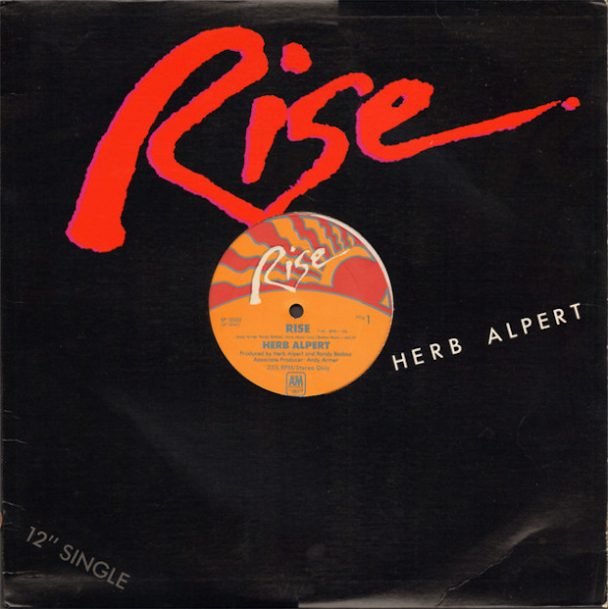 The Number Ones: Herb Alpert’s “Rise”

Maybe the deja vu hits when you hear the bassline. Maybe it takes a little longer. Maybe you get three minutes and nine seconds of the way into “Rise,” the flukey jazz-funk instrumental that hit #1 late in 1979, before realizing how you know the track. Maybe you hear a certain flanged-out, echoing guitar chord, and your brain immediately floods with images of escargot and Versace and someone’s daughter tied up in a Brooklyn basement.


I was 40 days old when “Rise,” the laid-back instrumental from the 44-year-old jazz-kitsch bandleader Herb Alpert, hit #1 on the Billboard Hot 100. If I’d heard “Rise” before getting to work on this column, it had never made an impression. And yet I know that bassline and that guitar chord on a deep, cellular level. I know them because the producers Deric “D-Dot” Angelettie, Ron “Amen-Ra” Lawrence, and Puff Daddy sampled them on the Notorious B.I.G.’s 1997 single “Hypnotize.”


There are different kinds of #1 singles. There are the kinds that echo down through the ages, helping encapsulate their eras, becoming a sort of shorthand for what life was like during this tiny slice of time. “Hypnotize” is that type of #1. And there are #1 singles that dissipate over the decades, that become obscure and interesting little footnotes. “Rise” is that type. But because of “Hypnotize,” “Rise” is also the first type. Thanks to that sample, that “Rise” bassline and guitar chord are inscribed on the lizard brains of entire generations.

But this column will eventually get to “Hypnotize.’ Even without “Hypnotize” carrying its legacy, “Rise” is its own kind of fascinating story. How did this happen? How did a supremely chill wordless groove from a middle-aged bachelor-pad relic come to knock Michael Jackson out of the #1 spot? Its circumstances couldn’t be replicated. A lot of things had to fall into place to make the rise of “Rise” possible.

Herb Alpert had been one of the album-sales champions of the ’60s. In 1962, he’d founded a group called the Tijuana Brass, and they’d made instrumental jazz-pop elevator exotica that, paired with cheesecake album covers, became hugely lucrative. In 1966, the Tijuana Brass had sold more albums in the US than even the Beatles. And while Alpert was primarily a trumpeter, he’d hit #1 by singing the Burt Bacharach/Hal David tune “This Guy’s In Love With You.” (He’s still the only artist ever to hit #1 as both a singer and an instrumentalist.)

In the 11 years between “This Guy’s In Love With You” and “Rise,” Herb Alpert had zero top-10 singles. In fact, his greatest pop-charts success had been a version of “My Favorite Things” that had hit #45 a little while after “This Guy’s In Love With You” had peaked. Before “Rise,” Alpert hadn’t even been on the Hot 100 in five years. It didn’t matter, though. Alpert was a music mogul. In 1962, Alpert and his business partner Jerry Moss had founded A&M Records. (Alpert was the A.) Even after the Tijuana Brass boom times, A&M had tremendous success with artists like Carole King, the Carpenters, and Peter Frampton. Herb Alpert was not hurting for money.

In 1979, an A&M A&R had the idea to remake Tijuana Brass songs as disco instrumentals. Alpert’s nephew Randy, who was going under the name Randy Badazz, was trying to carve out a name for himself as a funk musician. Randy felt conflicted about the project, but he agreed to it, and he convinced Herb to come on board as well. Randy reworked the arrangements for old Tijuana Brass songs like 1962’s “The Lonely Bull,” but those disco reimaginings didn’t sound great. (“The Lonely Bull” had peaked at #6. It’s a 6.) So Alpert and his band instead tried out “Rise,” an instrumental track that Randy had written with his writing partner Andy Armer.

Initially, “Rise” was a disco song, but Alpert had the idea that he should slow it down to 100 beats per minute, a more groove-strut tempo. Alpert liked the idea of a song that could get played in discos as the night was ending, so people could slow dance. “I don’t think Herb had been in a disco at that point,” Randy said later. Maybe that idea — making “Rise” into something disco-ajacent, rather than straight disco — allowed the song to thrive in the late-1979 days when the disco backlash was taking shape.

As a recording mogul, Herb Alpert had access to some of the best session musicians and recording equipment in the world, and he took full advantage of that on “Rise.” The song sounds a lot like the expensive studio-pop of the oncoming ’80s, with gleaming synth sounds and polished echoes and reverberating overdubbed handclaps. “Rise” may have been the first hit song to be recorded digitally. It works as slick, lush rich-guy mood music — music that might soundtrack a montage about a coke kingpin’s yacht. The “Rise” video — Alpert dancing goofily with his wife Lani Hall and assorted friends on a sunset beach — was exactly the vibe.

But as slick as “Rise” was, the song probably wouldn’t have had a shot on the pop charts if it hadn’t become part of a cultural phenomenon. The thing that pushed “Rise” over the top was General Hospital, the hugely popular daytime soap opera. In one scene of a 1979 General Hospital episode, a character named Luke Spencer rapes a character named Laura Webber at a closed-down disco. The show used “Rise” to soundtrack the scene; reportedly, Anthony Geary, the actor who played Luke, was the one who suggested “Rise” to the show’s musical director.


I don’t have time to dig into the whole General Hospital phenomenon in this column, but it was absolutely a thing. After the rape, Laura fell in love with Luke, and their ongoing storyline became a sensation. In 1981, on a special General Hospital episode with an Elizabeth Taylor cameo, Luke married Laura. 30 million people tuned in to watch. It’s still the highest-rated soap opera episode in American TV history. (I don’t even need to point out how #[email protected]#ed up it is that this story is all built around a rape scene, right? We’ve all noticed that already? Nobody has ever paid me to write a General Hospital column, so I have not fully investigated the cultural context here, but yeesh.)

On General Hospital, Laura spent a lot of time flashing back on that rape. Every time she did, “Rise” would play on the soundtrack. So “Rise” aired a few times a week on General Hospital, and it worked its way into the American cultural fabric. People liked this rape-scene song enough to buy the single, or to play it on adult-contemporary radio. So that’s how this rich, expansive jazz-funk instrumental hit #1 and eventually became the skeleton of one of one of the most famous rap songs in history. A soap-opera rape scene. Pop-music history is wild.

On its own merits, I think “Rise” is a pretty decent piece of music, a canny update to the easy-listening instrumentals of the ’60s that Alpert had helped popularize. The bassline is undeniable. Alpert’s trumpet, warm and emotive without being too showy, is strong. All the tinkly pianos and vibraphones get a little busy for me, and the melody can veer toward the maudlin, but Alpert and his musicians still worked up a no-joke groove. Alpert had the right idea in slowing the song down. I can’t imagine “Rise” resonating as pure disco. As laid-back expensive jazz-funk, it’s not bad at all. Still, at least for me, “Rise” suffers from the same problems as a lot of songs that became iconic samples. To someone who grew up on “Hypnotize,” “Rise” sounds oddly incomplete. It sounds like it needs something. It needs Biggie Smalls.

Alpert kept making music after “Rise,” and he kept running A&M records. A&M signed Janet Jackson in 1982, and she became one of the dominant pop stars of the era. (She will appear in this column plenty of times.) Herb Alpert scored one more top-10 hit in 1985, when he collaborated with Janet Jackson and Lisa Keith on the 1987 single “Diamonds,” which peaked at #5. (“Diamonds” is a 6. Its video is incredible.) Alpert and Jerry Moss sold A&M to PolyGram for hundreds of millions in 1989. They kept running it until 1993, when PolyGram pushed them out. Then they sued PolyGram and reportedly scored themselves a few more hundred million in the settlement.

Alpert is now 84, and he’s still making music. He released an album called Over The Rainbow last year. Barack Obama gave him a National Medal Of Arts in 2012. He seems to have a pretty good life.
Click to expand...

Might be wrong but thought the hand clapping on Rise and Aranjuez were live, not overdubs. Either way, always thought them cool. If he needs a clapper for a future recording, I hereby volunteer.

One of my favorite tidbits about it is the fact that Julius Wechter didn't like the song. On the "Herb Alpert Story" radio series, Cissy Wechter recounts how Julius came home from the studio and told her it was boring, repetitious and he just hated it.

I got a kick out of where he mentions that the song sounds like it has something missing.... "it needs Biggie Smalls." That's just because he heard "Hypnotize" before he heard "Rise." I would guess that if I were to listen to "Hypnotize," I would feel like Biggie Smalls was ruining a good Herb Alpert tune.