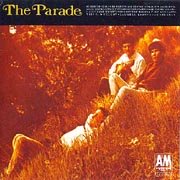 The first unreleased album in the A&M canon, THE PARADE was given catalog number SP-4127 but was never released as such. Not until the Japanese rescued the tracks and issued it as POCM-2104 on CD did we ever even glimpse the cover image, which we can only assume was the one originally intended. The Japanese also later re-issued the CD with another cover: 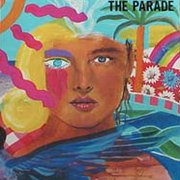 When I was asked to write liner notes for this reissue of THE PARADE album, I called Murray MacLeod and we relived some of the fine memories from those sessions.

Murray, Smokey Roberds, and I had written a song called Sunshine Girl. We thought it had something so we saved our money and cut a demo in a small studio. I played it for A&M and they thought it sounded like a hit and we were in business. (Life was simple in those days) We cut the single and it took off.....Now we had an album budget.....At the time (middle sixties) the pop album was beginning to be seen as an art form so we set out to make an album with a shape that was varied and well rounded.....having many colors if you will...Our first real "album" project. We used the best studio players in town. I was the producer...Murray and Smokey helped a lot on arrangements and we used all kinds of vocal combinations...often doing unison leads and or unison layered mackgrounds..We wrote the whole album with a lot of help from our cohort Stuart Margolin and we were happy with the result, It's rewarding that it can now be heard in it's [sic] entirety. Thanks for listening. - Jerry Riopelle

p.s. The album consisted of eleven cuts. The songs...LAUGHIN' LADY....I CAN SEE LOVE....and....THIS OLD MELODY....were attempts at other radio singles or B sides and should be seen here as bonus tracks.

Yes, this recording sat around for decades before it was released... Nice to know what we have missed and caught up and one of the best examples of Sunshine Pop and light Psychedelia...

Hard to pick a favorite; they're all good and what gave way to escape from the perils and rigors of everyday life and the mundane while ushering this golden era in American Pop...

Picked this up last year -- and can report with confidence that those who are connoisseurs of Roger Nichols & The Small Circle of Friends LP will most likely find The Parade a satisfying musical endeavour.

It's easy to understand the affinity between MacLeod and Nichols as both appear drawn to that Wilson/Bacharach world of unique chord progressions, memorable melodic and rhythmic counterpoint, and that "special bag of musical quarks" into which only the truly gifted have a direct artistic hot line.

The CD release features an assortment of very listenable demos (one exceedingly so) in addition to the proposed LP sequence (which seems to suggest a 14-song LP, though such a configuration is highly doubtful; most likely it would have been an 11-song LP.) Most songs appear to have been recorded during Winter/Spring '67 with three additional songs apprently from singles sessions in later '67 or '68 -- indeed a couple of the '68 tunes seem a bit out-of-sync with the balance of the "LP". All selections are original compositions of very good quality.

Roger Nichols fans will be please to uncover an unreleased Roger Nichols Trio selection, Montage Mirror -- very polished for being classed as a demo. Similarly, MacLeod's Kinda Wasted Without You, sans the Roger Nichols touch, is a curious listen. Stylistically, the group fits well within the Monkees/Turtles/Association feel of '67/'68 Southern Cali pop/rock -- and like the finest of such pop, the tension/release feel (very much characteristic of the Roger Nichols LP) is very much in full bloom.

The release would make a wonderful addition to anyone whose musical reveries include excursions to given Santa Barbara or Ventura county beaches...

Staff member
Site Admin
Thread Starter
While eating out at Perkins the other morning, I heard their '60s music service play "Sunshine Girl" by The Parade. Quite a surprise.

This is one of the reasons I LOVE this place and why I have been poking around here since what, 1998 I guess. I never would have know of this project without Harry's first post a little over a year ago. But I must tell you that you can now pick up a MUCH SUPERIOR version of this collection with many more bonus tracks - 23 tracks in all! And awesome new artwork which uses the original A&M PHOTO SHOOT! Not to mention a new low Amazon Marketplace price!: http://www.amazon.com/Sunshine-Girl...=sr_1_1?ie=UTF8&s=music&qid=1279319716&sr=1-1

Which brings me to my next question. Is any one else here familiar with "Hamilton Streetcar"? Not to be confused with "Peppermint Trolley".
I was a huge fan of their single, "Invisible People" and I purchased their LP,
"Hamilton Streetcar" on the DOT Label. Not knowing what to expect, I was completely blown away and have truly fallen in love with this album. Highly recommended.

I wanted to mention the 2008 Cherry Red reissue , featuring the complete recordings is now out of print and sells for around $50. However the MP3 download is less than $9 at Amazon so at least the music is available. Too bad they did not include a PDF of the booklet.
A

If you like The Parade, check out Harper's Bizarre ("The 59th Street Bridge Song (Feelin' Groovy") , "Come To The Sunshine", & the remake of the late Cole Porter "Anything Goes"). They also do the remakes of "Chattanooga Choo Choo" & the late Johnny Horton "The Battle Of New Orleans"). Matt Clark Sanford, MI
A

The Parade is also available on itunes as well!! Matt Clark Sanford, MI
You must log in or register to reply here.