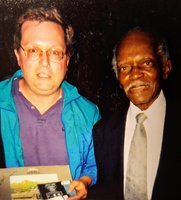 Thread Starter
Staff member
Moderator
I met Hank Jones (1918-2010) when he played grand piano for the Knoxville TN Jazz Society on April 27, 2004 at the Bijou Theater. He was part of a prominent music family, being the brother of Elvin Jones (drums) and Thad Jones (trumpet). It was Hank Jones who played piano in 1962 when Marilyn Monroe sang "Happy Birthday" to President John F. Kennedy. At 85 his skills were quite impressive.