Thread Starter
Even though I already had this album on my collection, I happened to buy a cd "The Singles 69-73" a couple of months on a estate sale for $1, just because it was made in Japan and of course because for that price there is no harm to add another Carpenters cd to your collection. I put it next to the other 3 "Singles 69-73" cd versions I own, and forgot about it, until last night.

I was reading some Cd info at Keith Hirsch's CD Resource, and this person reviews the Singles 69-73 made by Matsush!ta. I remembered the cd I bought on this estate sale and was very surprised to find out it was the Matsu$#!^a one. I'm going to quote some of the info about the cd:

"The disc has the telltale signs of an early Matsush!ta pressing. It has “MADE BY MATSUSH!TA ELECTRIC IND.CO.LTD.” and the Technics logo stamped on the clear plastic ring, and the matrix code is simply “3601 2”. The matrix code looks like handwriting. The disc has “MADE IN JAPAN” printed at 5 o’clock. As stated earlier in this post, the booklet and back insert were printed in Japan. There is no barcode on the back insert.

In my experience, all Japan-for-U.S. pressings of The Singles 1969-1973 are rare, but the Matsush!ta and CBS/Sony pressings are the rarest of the four. If you are a collector, grab any Japanese pressing you can find, as they all have the unique content mentioned above. With persistence, you should be able to find all four searching online and in used CD shops.

Another interesting consideration for early pressings of The Singles 1969-1973 is that early pressings, Japanese, West German, and early U.S. DADC, are found with sped-up versions of “Superstar”, “Rainy Days and Mondays”, and “Goodbye to Love” and the original single mix of “Yesterday Once More”. So with this title, the collector has the challenge of finding a number of rare early pressings, all of which have unique content."


I don't know about you, but I usually get lost between original mixes and remixes and ultra mixes... But the "YOM" version in this one sounds beautiful, pristine would be probably the best way to describe it.
Last edited by a moderator: Dec 27, 2020

Staff member
Site Admin
Nice find. Sorry about the forum censoring your spelling, but it's just trying to keep out foul language. I've edited it so it looks closer to the correct company
name. 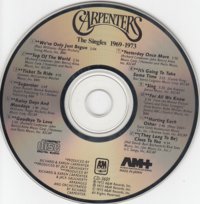 Harry said:
Nice find. Sorry about the forum censoring your spelling, but it's just trying to keep out foul language. I've edited it so it looks closer to the correct company
name.

Thanks for editing the post Harry! I figured it out it had something to do with the name of the company. Here is my Matsush!ta cd

I’d like to find myself one of these nice CDs. Literally every AM+ copy of this album I’ve bought in Hawaiʻi has had the sped up medley and the 1985 remix of “Yesterday Once More.”

Also, I’m slightly amused by the censoring of that name. It’s Japanese for “under the pine tree.” “Matsu” (also my great-grandmother’s given name) is pine, and the other part means “underneath/below.”
You must log in or register to reply here.