(Note to Harry and Rudy: Wasn't sure whether to post in Herb's forum or here. Please amend as necessary. Thanks.)

Staff member
Site Admin
I suppose my favorite of these two would be Herb's - that's the one I heard first, so it seems definitive. But actually, the first version I heard was the mono recording from the mono LONELY BULL album, which was the same on the mono single. The extraneous woodblocks and other percussions added to make a stereo recording out of a mono just clutter the record up.

Staff member
Site Admin
A lot of us find this early Dore Alpert recording to be a foreshadowing of "Acapulco 1922".

Staff member
Site Admin
And, a final note on the song. When it appeared on the Collectors' Choice compilation for the Baja Marimba Band, the song was listed a hundred years too early: 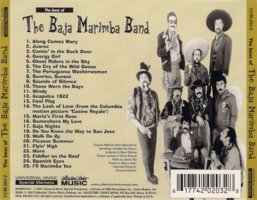 The TJB version, because it sounds as if it could have been recorded in 1922. I listen to it, and I visualize a silent film taking place in Acapulco (or somewhere abouts in Mexico).

Staff member
Moderator
I'm not a huge fan of either version. I heard the Baja version first, I think, because The Lonely Bull was among the last TJB albums I heard.... I remember hoping the TJB version of "Acapulco" would have more zing to it than it turned out to have, or maybe not be so "bouncy." (Or as Herb might have said, I wished it was funkier.) And, I'm less of a fan of Herb's trumpet sound on the earliest albums anyway. Long story short, I wish he would have given it the "El Presidente" treatment -- taken another shot at it when he had his sound more finalized.

If this were a boxing match, I'd say Baja wins by a split decision. Both versions are good as each has a clever arrangement.

Thread Starter
The free-for-all sections on Acapulco 1922 — featuring an intoxicated-sounding horn section — must have been a gas to record. When I first heard this at age 10 this was my favourite number with that mirthful soprano sax and the pileup ending with the trumpeter nailing a G above high C! (I wonder who those screech and reach trumpeters were that Herb hired?).

Herb's 45 version is preferred to the LP version for the reason Harry cited, and although the piano is terrific, it sounds more like a demo to me.

BMB's drunken crash-collision version is the one for me.


alpertfan said:
The TJB version, because it sounds as if it could have been recorded in 1922. I listen to it, and I visualize a silent film taking place in Acapulco (or somewhere abouts in Mexico).
Click to expand...

The visual I always associated with this piece is a man waiting for a haircut in a barbershop (the whistling barber) in a small mid-western railroad town (the piano groove)...circa 1922.

Harry said:
And, a final note on the song. When it appeared on the Collectors' Choice compilation for the Baja Marimba Band, the song was listed a hundred years too early:
Click to expand...

Along those lines, here's a really odd one: According to the liner notes of a Paul Bley' Floater LP -- recording of the LP began in 1693 -- then he waited 269 years to finish up the recording (which is quite a feat in itself given recording technology wasn't developed until the late 1800s).

JOv2 said:
then he waited 269 years to finish up the recording
Click to expand...

Of course. It took 268½ years to perfect the microphone stand.

Then recording could continue.
You must log in or register to reply here.