Thread Starter
(I used the TJB version I was accustomed to (not the Shout! CD version, which is missing, at a minimum, one additional trumpet part and the bone in the intro).

The BMB version is too pleasant even with the E over high-C bit for the trumpet. Herb's exciting and fun version is the ticket home on this shootout. The song is a bit monotonous -- definitely not one of Julius' more interesting numbers -- but Herb wields his circa 1965-66 TJB in-the-pocket magic to make it a viable listen. Years ago I wrote, "This sound like Spanish Flea + Cinco De Mayo. And since 1+1=1, it's actually a good thing: only one song to avoid when programming the CD." While it still remains the most disposable number on WNML, the version presented here is definitely more notable than the Shout! CD version.
A

Herb's version by a nose over Baja.

Staff member
Site Admin
I find this a hard but easy choice. By that I mean that I like the song a lot, and both versions are favorites on their respective albums, but Herb's take on the song is extra special. WHAT NOW MY LOVE is among my favorite albums of all time, and his "Brasilia" just lights up Side Two of that album.

It's true that all CD versions pale in comparison to the old "wet" version that most of us seem to have heard on the LP. It's frustrating that the album has been re-released on CD three different times, and all are the "dry" version. I was hoping that when Randy remastered the album to be "exactly the way it was originally released", that we'd finally get that more desirable version.

Julius' take on his own song is rather straightforward and not as flamboyant as Herb's, but still an outstanding track on RIDES AGAIN.

Staff member
Site Admin
The version without the missing parts by the TJB is what I grew up with, so that's the preferred TJB version for me--the "official" version out there has always sounded like it's missing parts (which it is).

Can't say I have a preference for either TJB or BMB--they each have their strengths. Maybe a slight edge towards the former though.

Staff member
Moderator
Another TJB vote here, also preferring the "wet" version which I have always preferred to call the "finished" version.

I really wish somebody would sit down with Herb and do an "A - B" comparison on this because it's never come out in any of his interviews -- even on the BBC interview raw audio, Tony brings up the two different versions of WNML album, but this song isn't mentioned and Herb sort of dismisses it as a "must have been a bootleg" anamoly. So I continue to wonder if he even realizes the differences -- he may have forgotten that this "more finished version" even exists.

I have always liked the BMB version too but once again, I really think Herb nails this one to the wall. Ironically, my favorite parts of it are Julius's marimba solos.

Staff member
Site Admin
The two different mixes are obviously more important to us than they are to the powers that be. I've heard of a number of attempts to clear it up - all leading to nowhere.

Staff member
Site Admin
Can't find my single of it, but the Baja boys did an updated, uptempo version of "Brasilia" that was the flip side of "Yes Sir, That's My Baby."

This single has the album version: 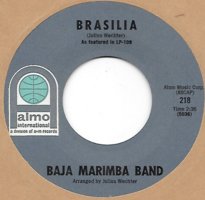 This is the non-album redo, on A&M 937. Note the shorter track time, and the incorrect album attribution. 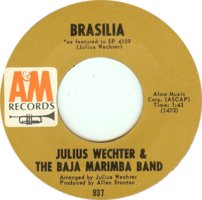 This version is a lot of fun and would give the TJB a run for its money! Didn't find it on YouTube, and I'd post mine if it wasn't stored away. Maybe I can find it...