Thread Starter
What's on your bucket list concerning our favorite beloved duo?; Here are a few of mine;

* Got to visit, the Newville Ave residence.
* Paid my respects to my favorite vocalist of all time at The Carpenter Mausoleum at West Lake Village, CA.
* Went to the former A&M Studios (now the Henson Studios) on N. La Brea Ave in Hollywood. We didn't get a tour but they were gracious enough to let us into the courtyard and off the sidewalk.
* Got to visit the Hollywood Bowl, the sight of Richard & Karen's Battle Of The Bands triumph of 1966.
*Saw the duos star on the Hollywood Walk Of Fame.
*Downey High School - Where Karen's love affair with the drums began
* Downey Methodist Church - Karen's funeral, Richard's marriage in 1984.
* Got to hang-out with Carpenters fanatics from around the world.

Note - Many thanks to the 50th Anniversary convention for making this all possible!

* Go to New Haven and visit the residence at 55 Hall St.
* See the Nathan Hale School in New Haven.

* Take a selfie in front of Karen's 350 Mercedes.
* Finish my Carpenters vinyl collection and have CDs of all their recordings.

What have you accomplished? Seeing them in person? Actually meeting them? Please share...

I have visited 55 Hall Street along with the Nathan Hale School in New Haven and even spent a few hours with Debbie Vaiuso and her mother who were very gracious and shared a lot of memories of the Carpenter family from the 60's. When you visit NYC let me know and we can meet in New Haven and check out the east coast Carpenter sights!

Since recently acquiring Offering that was really my "last" thing on my bucket list; however, I would love to have one last conversation some day with Richard. I enjoyed them back in the day (late 80's and 90's) when he was more accessible. I'd also like to actually get a picture with him, as in the many times I've met him, I only took a picture ONCE...and that was on a very old "flip phone" which I have lost long ago.

I traveled to California in 2010, visiting the 9828 Newville House then. Also checked the Century Towers, the Carpenters star at the Hollywood Boulevard and the former A&M studios (outside) Made it to Long Beach to see the Carpenters Performing Art Center. That was really awesome. I went to see Herb Alpert in concert where he spoke fondly of Karen. And also went to see Dionne Warwick in concert at a Casino. My friends and I arrived late but on our way to the concert room we ran into Dionne Warwick walking to begin her concert, so I guess that is the closest I have been to someone from the Carpenters circle

My bucket list is not too long. I want to keep collecting cds, and find whoever bought Karen's red jaguar and buy it

Staff member
Site Admin
I consider a "bucket list" to be things I still want to do or own before I die, and that stuff that is already done or owned would be crossed off that list.

That said, I don't know of anything that is on my list. I'm not big on meeting stars. I rarely get to the west coast and have no plans to do so at present. I pretty much have most of what I want in the way of records, books, CDs, DVDs, etc. As something new comes along, I'll attempt to purchase it, if its within my means. I have no desire to own personal objects once belonging to a member of the duo.

I've been fortunate enough to have seen the duo in concert a number of times and have virtually every commonly available and officially released recording, some many times over.

Not sure how many of Karen's drum kits Richard still has in storage but I'd sure love to buy one and that would complete my bucket list!

Portlander said:
Not sure how many of Karen's drum kits Richard still has in storage but I'd sure love to buy one and that would complete my bucket list!
Click to expand...

Didn’t Karen own a blue swirl vistalite set similar to those below? That would be my choice - unless I’m imagining things, in which case I’ll take her jellybean set! 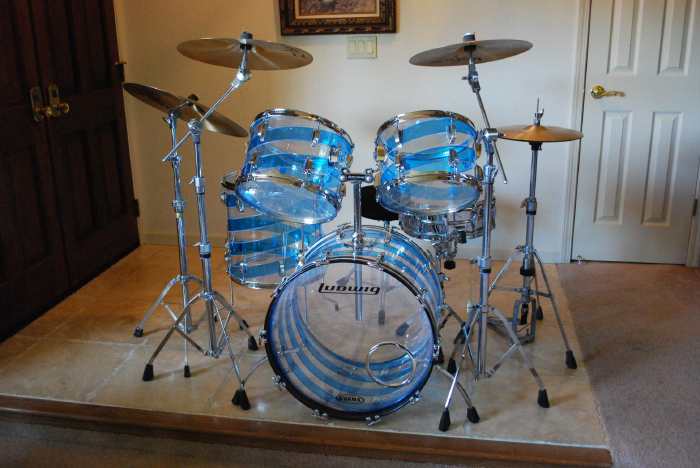 I pretty much have everything in the way of music and videos, sans a couple of promo singles. I saw them in concert several times, met him once. The only item item I would really love to get, is extremely scarce and rare. The promotional Carpenters neon light from the Horizon release the summer of 1975. You can see it in the Remembering dvd behind Richard when he’s talking. I’ve seen one in person that a collector has in LA, around 1992. I’ve never seen it come up for sale or auction. I’m sure I couldn’t afford it if it ever should. They are extremely rare.

From what I've read, Richard donated Karen's drum kits back in the 80's but did keep the jellybean set which is stored in his warehouse. What I'd give to poke around there for a few hours! Would also love to acquire one of the Carpenters signs/neons they used in the background at their concerts.

Portlander said:
From what I've read, Richard donated Karen's drum kits back in the 80's but did keep the jellybean set which is stored in his warehouse. What I'd give to poke around there for a few hours! Would also love to acquire one of the Carpenters signs/neons they used in the background at their concerts.
Click to expand...

Q. I was wondering whatever became of Karen's drums. Are they in a museum, the hall of fame, or in a trap case in a warehouse somewhere? I remember she was a Ludwig player and used Vistalites for a while. Your music inspires me, daily I use it to find power, I hope you know that it will never be forgotten.

A. You're absolutely correct in that every drum kit Karen owned was a Ludwig. The original silver sparkle is on display at the Carpenter Performing Arts Center. The first set was a Ludwig entry level, painted forest green with a gold strip around the middle. The 2nd silver sparkle set is the one that went on the road. It is packed and stored. The others that came after the second silver sparkle set were donated due to space limitations. I did keep the jelly bean set, each drum a different color, and quite an eyeful.

And then there’s this item...that I’m sure some would love to own

. If you look carefully, there’s a recent comment on the below forum about the car which states:

I’ve seen a few comments on this car lately. This car is fine and living in New Jersey. Very unfortunately, it has not been out of the garage or even started in many years. This is a real no-no for any car, but for a car like this it is death. My wife does not like me spending any time with any of my old cars and so this is what happens. I guess the car, like Karen, is resting in peace.

I'm on the east coast --so, bucket list is to make it to the west coast & explore Carpenter related sites. I want to visit the "Close To You" and "Only Just Begun" apartment buildings for sure.

They’re very close to the Methodist church they attended, and Karen’s memorial service was held. Fans got to go in the large overflow building adjacent to the church. The service was piped in through speakers on the walls.
P

I want a ring that touched her microphone.
You must log in or register to reply here.

Dec 13, 2017
Yamaguchi
Y
M
For Richard: A story of appreciation for The Carpenters