I ran across something unexpected this weekend.
Years back, I found a full supposedly remastered series of songs from Your Navy Presents.

I filed it away in the back of my mind, thinking I had already heard everything on it. Imagine my surprise when this was the list of songs on it:
Ticket to Ride
Nowadays Clancy Can’t Even Sing / All I Can Do
All of My Life
Cinderella Rockafella
Mr. Guder
I Fell in Love Again (with you?)
Get Together
Bacharach Medley
Love is Surrender
Can’t Buy Me Love
Baby It’s You
Flat Baroque
Help

I had not heard Baby It's You (one of the greatest in their catalogue) or Flat Baroque or the Bacharach Medley on this before.

On the liner notes found on From the Top, Richard states these were recorded and used in March 1970. So three questions:
1- Are all these songs from Your Navy Presents?
2- Is this the correct order in which they were played?
3- Does anyone know the exact date this program aired?

The order of songs is hard because this was aired over four, I believe, fifteen minute broadcasts interspersed with silly interviews. I have a version of this, and the songs are certainly in a different order. Yet, and still, I love some of these versions. Plus, you can really hear Karen's drumming I friggin adore this crazy, upbeat version of Can't Buy Me Love and this version of Clancy.

Staff member
Site Admin
Yes there were four fifteen minute programs. The following list includes all of the PSAs for the Navy and all intros and interviews by Sam Riddle. Here is the order in which they originally aired. 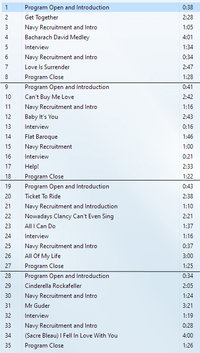 Thread Starter
Thank you, Harry. Thank you very much.

Staff member
Site Admin
The reason that the order of these songs get jumbled is due to the nature of the way the programs were originally distributed. Each fifteen minute show was to air during a particular week, so stations were sent these records with date instructions every two weeks. (There were two weeks of shows on each record.)

The records were then supposed to be tossed - or mailed back to the syndicator. Usually they were just tossed. A mail-in post card was included that the program director signed and dated, indicating the date and time that the show ran.

So with this being a four-part show, two full weeks at a radio station would pass by until the second record would have arrived. If someone tossed the first one, but someone else saved the second one, it would account for the haphazard way that these shows appear. Some people have acquired one or the other of the records without the other, thinking they had the full thing.

Remember, as important as these records and shows are to we, the fans, now many years later, they were totally at the bottom of the totem pole of importance at the radio stations at the time. These were filler shows used to fill up (typically) Sunday morning time slots that were promised as "public service" fulfillments for license renewal.


A sample label for show 40 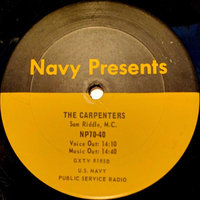 Thread Starter
I did not understand any of this before. Very interesting,

Does anyone happen to have a copy of the performance of Ticket to Ride in #70-41 that doesn't skip? (AKA a version that isn't 2:38.) It sounds like it has a HUGE time skip around 0:53. Or... is that just the way it was on the original vinyl? It'd be interesting if it wasn't a full 4-minute version, whatever the situation. Despite being a recruitment publicity thing, I REALLY love these collections. Reminds me a lot of The Free Design's anti-war Christmas songs in collaboration with the Air Force, hehehe. Good music finds a way.

Staff member
Site Admin
I'm sure that this was the way it was edited for the LP/program. The program was strictly 14 minutes and some seconds (near 30). It could be no longer.

I'm sure that the Navy or Sam Riddle's people were forced to make that edit, crude as it is.

If there is an unedited version, Richard probably has it in his archives. Pretty sure the Navy doesn't!

Harry said:
I'm sure that this was the way it was edited for the LP/program. The program was strictly 14 minutes and some seconds (near 30). It could be no longer.

I'm sure that the Navy or Sam Riddle's people were forced to make that edit, crude as it is.

If there is an unedited version, Richard probably has it in his archives. Pretty sure the Navy doesn't!

Oh my, that's SO interesting! Thank you so much for elucidating me. : ) I can't believe they didn't even make a cut where it would make SENSE, like, sheesh. As the Carpenters' first big hit, showcasing an early live recording like this in a collection would be just wonderful. Even the subtle changes between the Offering release and the reel-to-reel that Cuyler found (shoutout to @Cuyler-- this forum set-up is still not letting me send you follow-up messages on the PM system-- I left you a reply on the Let Me Be the One comment chain about how to find my e-mail? >_< Cumbersome. EDIT: WHOOPS, the forum literally just promoted me, hallelujah.) is just a WONDERFULLY refreshing change that allows you to hear the song afresh-- and that's how I was feeling when I started listening to the Your Navy Presents version.

Staff member
Site Admin
Remember that these shows were really like facial tissue. They were meant to be used once and then tossed away - and most were played at something like 6AM on Sunday mornings, so a bad edit wasn't a big deal. The sound on these are also subpar most of the time. I have a couple of them that sound just as bad as you think these Carpenters shows sound. On one with Sergio Mendes, they only used one channel of the stereo making the record sound really bad.
A

Yeah, that edit is pretty horrid! But these recordings are so fascinating. Just the fact that they’re performing these (for the most part) ‘live’ in the studio is a real treat. And so many of them are from the ‘Offering’ album. I couldn’t believe my ears the first time I heard it (in 1986 off of an 8-track tape my friend had created years before).
You must log in or register to reply here.

Reconstructing Made in America
2