He is quoted as saying that he “typically does not go back and revisit old songs...”

He’s recorded Besame Mucho, a tune I like, mind you, three times: Herb/Hugh, Magic Man, and Herb/Lani Live. He’s recorded “Can’t Stop Thinking About You” twice (North on So St and Second Wind). He did a second rendition of The Lonely Bull. Magic Man he has done twice (Magic Man; Colors). He’s done Don’t Go Breaking My Heart twice. You Smile - The Song Begins has been done twice. A Taste of Honey and Route 101 have been revisited and of course, he did a whole album in which he reimagined the TJB.

There are a lot of other songs he could revisit. Save the Sunlight immediately comes to mind. But I am not seeing the point of revisiting Zoo Train.

Staff member
Site Admin
The man is in his mid 80s. I think it's remarkable that he's still releasing *anything*.
J

I am very thankful he is still recording and touring and look forward to more to come.

Joe Gifford said:
I am very thankful he is still recording and touring and look forward to more to come.
Click to expand...

Staff member
Site Admin
If ya hate it, don't listen to it, and don't buy it.

I recommend giving this a close listen with a good pair of headphones. I think Herb has pumped in a lot more energy into this version. I like it!
D

Y’all completely missed the point, or wanted to ignore it.

Of course, it’s good that he records and, when able, to live perform.

The tune itself is fine - it was one of the better tracks on that record, a record that, personally, I dont listen to much (and yes, I’ll be one and done on this tune). He seems to be wanting a TJB like sound on this version and that just gets back to my original point.

One of the things I’ve respected about him is his desire to keep looking ahead. It’s why I generally prefer his solo stuff more than TJB. But his comments accompanying this release belie the fact that he has revisited tunes many times, sometimes several times. If he is going to revisit stuff (if I was his producer, I suppose), I’d look for relevance. His own version of Wonderful World by Sam Cooke, perhaps. Save the Sunlight’s an env policy song. Something homage to Masekela and Gwangwa. Zoo Train 21 has no relevance, from a fairly tepid record.

Additiinally, he could cover other tunes by A&M artists under his tenure: Peter Allen, Rita Coolidge come to mind. Always thought he could cover I’d Rather Leave While Im in Love interestingly from a sound perspective. Same with Noche de Copas by M-C Alonso which, of course, he played on..

Or he could re-record tunes he was involved on with other artists on his own album.

I think the over focus on multiple sound effects in a tune takes away from straight playing and degrades the sound. One man’s opinion that I don’t expect to get any agreement on, however.

But his comments accompanying this release belie the fact that he has revisited tunes many times, sometimes several times.
Click to expand...

Well, the quote says he "TYPICALLY" doesn't go back and revisit old songs. He's recorded hundreds of songs and he's done what, less a dozen remakes over the last 30 years? So I would say that the remakes are anything but "typical."

I think it's great. It's a good original song and this is the far better version of it. Very nice soloing from Herb.

Mike Blakesley said:
He's recorded hundreds of songs and he's done what, less a dozen remakes over the last 30 years? So I would say that the remakes are anything but "typical."
Click to expand...

Remakes are all the rage when an artist is in their later years--they'll redo old hits with an orchestra, or re-record them (often as modern "clones," or in a different style than the originals), or do them as duets. An entire album's worth, often with a "volume two" to follow it up in a year or two. Herb never did a disco album of his TJB hits, despite that being an idea prior to recording "Rise." Instead of Under a Spanish Moon being all new works, he easily could have orchestrated his old TJB hits just to pump out another album. Yet he didn't do that either. I was going to say that he's never pulled a Rod Stewart and done a pop standards album, but if you look back at all the TJB albums, he's been reinventing pop standards all along. He just does it without the singing and the rent-a-tux.

If it satisfies an artist's muse to go back and revisit a tune they like, especially an artist that has been recording for over 60 years, where is it my place to complain about it? I like many tunes, and may not like a couple of others, but that's the same with every artist I listen to--there are tunes I like, and some I don't. No big deal. Skip what I don't like, and move along without analyzing it to death.

When I first saw the song title I thought it was that McCartney song from the mid '70s. In any event, I'm just glad Lou Adler got Jan and Dean...

Contributor
It came up in my Spotify "Release Radar" this morning. I like it.

The problem, if there really is one, and if there really IS one...it's a very nice one to have, is that Herb has done so much good stuff and has spoken to so many of us that it just might be a problem deciding just what is the best song to cover or re-record, remix, what-have-you. I mean, if you look at his repertoire, its almost as deep as the Pacific Ocean, and even more full of colorful, beautiful and fascinating life. It probably would be virtually impossible to cover everything that might sound good if it were redone, speaking from a time standpoint alone, much less from a logistical or legal standpoint(copyright, etc.).

Any artist has to be comfortable with what they're recording, even before thinking of the fans and their preferences. Herb is merely doing the best he can, recording what moves him, whenever it moves him. He doesn't really need money anymore...he's doing what he does because he likes to do it. The fact that it sells isn't really the foremost thing in his mind...he just wants to make music, and that, he does, in spades.

It's easy to put him on a pedestal because of his talent and reputation, and there's a huge danger in doing that...the longer we do it, the easier it is to fall off. If we allow ourselves to expect too much from anybody, how can they possibly deliver? It really isn't fair for us to expect more than anyone can deliver, is it?

I must admit that I didn't expect for Herb to re-record Zoo Train. It came as a surprise, a very pleasant one indeed; and it grows more pleasurable every time I hear it.

Also, keep in mind that Herb is a businessman as well as an artist. He's not about to go in the hole trying to produce music that no one wants to hear at any certain time for any certain reason. If there's a market, he'll do his best to fill it.

Also, the muse has to strike...maybe Herb just hasn't found the right voice or vision for some of the stuff we'd like to hear him redo.

We should be thankful that Herb is still speaking to us in such a profound manner at an age where most others aren't really capable of doing so any more.

He's still got it, and he's still willing to share it with us.

Staff member
Moderator
If I could have my Herb "wish," it would be that he record one more pop album with a regular (full) band again and cover some of the recent popular tunes plus some originals, the way he did in the TJB days. His recent music (especially the Christmas Wish album) is "thisclose" to it, except for the computer beats and some of the jazzy soloing. I know that would be more expensive to do than what he's been up to lately, but that's my wish.

Even if my wish doesn't come true though, I still get a kick out of whatever he decides to put out.

DAN BOLTON said:
Also, the muse has to strike...maybe Herb just hasn't found the right voice or vision for some of the stuff we'd like to hear him redo.
Click to expand...

Exaclly! I get the feeling that he'll have an older melody from a past recording in his head, and gets that flash of inspiration where he thinks of a new way to present the track. In that case I don't even consider it a remake--it's a totally different tune, and he's found a different way to perform it that we haven't heard before. Like what he did with the TJB-era "Flamingo" compared to how he covered it on one of his 90s albums. Or even "A Taste of Honey" from Midnight Sun.

Staff member
Moderator
reading this thread and listening to the gripes, I was like, "wait, he's done this song before?" I had to look through my "stuff" figuring maybe it was a North on South Street or Colors cut that I'd forgotten about (as those don't get a lot of play at Rancho d'MrBill). So, of course I found it on In The Mood. The difference between these two versions is quite drastic, and I much much MUCH prefer this new version, which clearly has that "TJB Sound" many of us long for. In fact, I'd say if the 70's version of the TJB was still recording, they may have sounded like this (but it could use more marimba, LoL).

Staff member
Moderator
Agreed, I love how he occasionally throws us (and/or maybe himself) a TJB bone by putting a bit of harmony trumpet into a song.

I like this. The up vibe got me out of my COVID funk. Herb is sounding good!

Staff member
Site Admin
This rolled into my Pandora jazz fusion station today, while in the Newly Released mode. 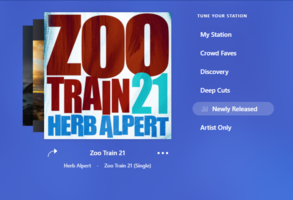 As I mentioned in another thread, I think the song has an African feel to it. I had images in my head of a safari as I was listening to it. Herb Alpert started his career by taking his listeners on vicarious journeys, and it's good that he's still able to successfully do that with his music.
You must log in or register to reply here.