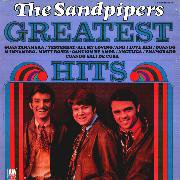 Producer Tommy LiPuma/ Cover photography Guy Webster/ This recording employs the HAECO-CSG system and may be played either monaurally or sterophonically.

Staff member
Site Admin
Question: Since I'm not at home to check, are all of the tracks on the Sandpipers' Greatest Hits available digitally on the releases that have been issued? I'm referring to the Japanese Digitally Remastered Best and the few Collectors Choice releases. What I'm wondering is if it would be possible to make a homemade version of this Greatest Hits album without having to resort to vinyl.

Harry said:
What I'm wondering is if it would be possible to make a homemade version of this Greatest Hits album without having to resort to vinyl.
Click to expand...

There's surprisingly only 50% overlap with Digitally Remastered Best. The three Beatles songs aren't on DRB, and neither are "Enamorado" and "Cancion de Amor." I know "Enamorado" is on the first Sandpipers album (which is on CD), but I'm not sure if the others are on another Sandpipers CD. Part of my memory is fuzzy from owning Foursider for all these years, which to me, had better song selection on it (and not just from sheer numbers).

I would have substituted some of these GH tracks with "Cast Your Fate To The Wind", "Come Saturday Morning" and "La Mer."

Staff member
Moderator
"Come Saturday Morning" copuld not have been on GH because that tune (and the LP on which it appeared) came after the release of GH.

--Mr Bill
who notes sandpipers are a good substitute for cornish game hens (but avoid seagulls)...

Mr Bill said:
"Come Saturday Morning" copuld not have been on GH because that tune (and the LP on which it appeared) came after the release of GH.
Click to expand...

But picking my own GH album, it definitely would ditch the wimpy Beatles covers!

Staff member
Moderator
This is an album I never had. I had all the rest of the Sandpipers output in one format or another (mostly 8 track) and still have A GIFT OF SONG and GUANTANAMERA and COME SATURDAY MORNING on LP, and finally got CSM on CD last year.

I always wondered why the Sandpipers albums overlapped songs so much. There was the "Spanish Album" which I could understand, due to its theme. But there were occasional tracks scattered over two albums..."The Wonder of You," as I remember was on COME SATURDAY MORNING as well as the title album. It seems like there were others...Or am I just dreaming all this?

Interesting reviews of the Sandpipers albums on Dusty Groove...they refer to the music as "creepy." Hmm, I never thought of it that way!

Staff member
Site Admin
Greatest Hits was actually the very first Sandpipers album I ever heard. My grandmother discovered it, and it didn't take long for my folks to discover it. Veteran innersleeve reader that I was, I picked out the Guantanamera album as the one I wanted for my own listening. Other than being highly disappointed by the dirge-like "La Bamba" (which I was hoping was going to be the lively, up-tempo song I was familiar with), I liked the rest of the songs. And a year or two later, I got the then-new Foursider.

Got to agree about "La Bamba"

Trini Lopez (who?) did it better, and louder, and happier!

Just for anyone interested in this kind of thing, the La Bamba LP was AMLB 51030 -

and the Spanish Album was AMLP 8010 (A&M "Hamlet" Label possibly Europe or U.K. only)

Got both of these.

Ahhhh.... The Joys of Vinyl

Staff member
Site Admin
If it weren't for vinyl, I think all of us would be having serious A&M withdrawals over all these years!

In fact, I'm not all that pressed to replace a lot of my vinyl with CDs, unless I just can't find a good, clean LP to put in my collection.

"La Bamba" was never intended to be a...ummm, what would you call it?...a ballad? Even more amazing--this track was on the Sandpipers' Digitally Remastered Best CD from Japan, a series not known for its intelligent track programming! The Baja Marimba Band had an installment in this series, but whoever sequenced the tracks ignored some of the great Julius-penned tracks in favor of gooey cover songs like "By The Time I Get To Phoenix." Fortunately, one of our contributors, Steve Sidoruk, got ahold of Collectors Choice, who was planning a simple reissue of the Japan CD, and they managed to replace four of the tracks with better ones, including a rare B-side, "Picasso Summer."

With Sandpipers, though, there really aren't a lot of tracks that would stand out...they're all pretty much running even. The Digitally Remastered Best would probably cover 99% of my needs anyway, just skipping the "La Bambas".

Main trouble with vinyl, of course, is that the equipment to play it isn't portable. In fact I've seen some "buffs" systems I wouldn't even describe as "transportable" - concrete speakers, etc.

Hence the use of CD-R and MiniDisk burners, and even Compact Cassettes.
S

The one Sandpipers' LP I own is 'Spanish Album', which I've considered a sort of 'Greatest Hits en Espanol'. Does anyone know the actual concept behind this? With its mainstream A&M packaging, it was aimed at middle America, not a niche latino market. The 12 'cover' songs, four arrangers, three Beatle tunes (and one 'La Bamba'), serve as a 'muy autentico' hits package. BTW, highest marks for Mort Garson's arrangements of 'Guantanamera' and 'Louie, Louie', both moving in a slow motion, other-worldly dream state -- the reason this LP is a 'keeper'. (Garson's arranging of 'La Bamba', on the other hand, is almost bizarre.)

Staff member
Site Admin
I don't recall which album it's on (they're not near me right now), but "Things We Said Today" has a similar arrangement to "Louie Louie". Both (or actually, all three) of those tracks you mention are on Guantanamera...and at least it's available on CD from Collector's Choice.

Staff member
Moderator
The Sandpipers' Spanish Album simply collected songs in spanish off their previous four LPs. In a sense it was the first A&M single artist compilation of songs from previous releases, predating the "Greatest Hits" series (that we're now featuring as AOTW) by about a half decade...

There were no new songs on Spanish Album