Staff member
Site Admin
Thread Starter
Over the last few weeks, I've been actively seeking to fill out my collection of Sergio Mendes & Brasil '66 single 45s for the express purpose of finding any alternate mix gems among the mono recordings. Just having mono versions of some of the CSG'ed stuff is a bonus, and I'm finding a few little oddities along the way.
Anyway, I just want to know if I've gotten all that there is to be had. Here's what I've got, in numerical order:

Other than a $15 copy on eBay of "Mas Que Nada/The Joker" that I'm not willing to pay for, I've been unable to find that original 45. For recording onto CD-R purposes, I'm going to use those two tracks from the mono version of HERB ALPERT PRESENTS. I find it somewhat odd that Sergio's first big hit is that hard to find, given the number of times it's shown up on compilations.

I'm only looking for original US singles at this point. I know there are a number of issues in the UK, Japan, Brazil, etc., that might qualify, but I can't trust that they are genuine US mono mixes. They could just be fold-downs - as indeed some of the US issues might be.

But from what I've heard, some of these have slightly different levels of compression, different dynamixs, some obvious, some really subtle.

Looking at the number of these tracks, there are too many to fit on one compilation disc as a regular CD-R, so I'll likely have to split them into two, which leaves me with the quandary of how to split and/or sequence them.

My first thought is to take all of the A and B sides and just split them roughly in the middle, so that all of the singles from the first three albums would go on one disc, and everything from FOOL ON THE HILL onward would go on the second disc. That works musically as the sidemen changed drastically at that point, but the there are the older B-sides that show up on the later singles.

The other thought would be to do the A-sides on one disc and the B-sides on another.

Contributor
So Many People had a single release, though I'm not sure if it was ever in mono.
R

There is a single of "Crystal Illusions" that was released as a promo to radio stations in 1969. Bothe sides are the same selection in full length. It did get some airplay but was never in wide release. Both sides are in stereo. 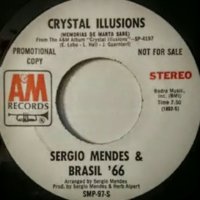 Contributor
Chelsea Morning also had a single release, again not sure about mono status.

Staff member
Moderator
I'm amazed they didn't do an edit on "Crystal Illusions." It had just become "okay" for singles to venture over three minutes by that time. Even the Beatles were still some months away from their epic "Hey Jude."

Maybe they were trying for an "FM hit."

Staff member
Site Admin
Edu Lobo's version is nowhere near as long, and Elis Regina's even clocks in under 4 minutes--it certainly could have been edited without losing much. But I wonder if it was, like Mike says, a shot at an FM hit, or even something pushed to easy listening or jazz stations where they were trying to promote the album. It's rather curious since it really doesn't fit into any of the above and from a hit standpoint, is probably the one track on the album that is the least hit-friendly (and the least ear-friendly, depending on the listener). The oddball catalog number for the single, SMP-97-S, would indicate it was never intended to be released as a stock single at that point.
R

Mike Blakesley said:
I'm amazed they didn't do an edit on "Crystal Illusions." It had just become "okay" for singles to venture over three minutes by that time. Even the Beatles were still some months away from their epic "Hey Jude."

Maybe they were trying for an "FM hit."
Click to expand...

That is possible.
Jim Webb and Richard Harris recorded MacArthur Park in 1967 and it ran for 7:20 and Hey Jude came out in 1968 for and ran for 7:21( I guess they did not want to be shown up) and both got the airplay. Brasil '66 was getting the FM airplay on the MOR stations but Crystal Illusions was ignored.
C

Regarding the original question, I'm not sure if it meets the stated qualifications, but I would suggest 1257 Sometimes In Winter/Aza Branca from 1971. "Aza Branca," a record I inquired about in another thread, was a non-album track for B'66 but was included (as "Asa Branca") on the Brasil '77 "Pais Tropical" album.

Staff member
Site Admin
They are great songs but IMHO, something like "Crystal Illusions" has no hooks that would catch the ear of the typical Top 40 listener. I am inclined to think it may have been a single released to not become a hit, but to promote the album (released to retailers for in-store play, perhaps). "Pretty World" was the blindingly obvious hit on that album, yet I don't think that one ever did as well as "Scarborough Fair" or even "Mas Que Nada."
J

Contributor
Neither Pretty World nor Sittin' on the Dock of the Bay cracked the Top 40, though they both came close. They did significantly better on the AC charts, and Pretty World especially was unavoidable on radio during the spring and summer of 1969.

JMK said:
Pretty World especially was unavoidable on radio during the spring and summer of 1969.
Click to expand...

Correct. The station I later worked for (WIOQ Philadelphia) had a jingle made up that mimicked "Pretty World":

Staff member
Site Admin
Thread Starter
That jingle was part of a package that also ran on WKNR in Detroit (go to 1:15):

Staff member
Site Admin
Keener had to do something. The Big 8 was walking all over 'em at that point.

For JMK .There was a promo single of " so many people" a side in stereo and the b side in mono. ( i had the single many years ago but i lost it later) however, im not sure if the mono side was a dedicated one or in the case of many at that time a fold down from the stereo version.

Mike Blakesley said:
I'm amazed they didn't do an edit on "Crystal Illusions." It had just become "okay" for singles to venture over three minutes by that time. Even the Beatles were still some months away from their epic "Hey Jude."

Maybe they were trying for an "FM hit."
Click to expand...

Mike: "Crystal Illusions" came out in the spring/summer of 1969. "Hey Jude" was September of 1968, and another 7-minute epic, Richard Harris' "MacArthur Park", which hit #2 on Billboard's Hot 100, was May/June of '68. Remarkably, Sergio did get airplay. The first time I ever heard "Crystal Illusions" was on KGIL in Los Angeles.

Staff member
Moderator
In our store in the early 70s, we had a stereo with turntable and Quad 8-track player that would "simulate" quad from regular LPs. I wasn't a drug user, but sitting in the middle of the four speakers and blasting "Crystal Illusions" at top volume was a pretty good mind-blower.
R

I was just on Amazon.com and there was a number of different Brasil'66 singles listed for sale.
T

Contributor
While it's an interesting production, I always thought "For What It's Worth" was a misstep for Sergio. A cover of a three-year-old Top 40 hit that was about the 1966 Sunset Strip riots. Yeah, you could apply it to Kent State, but what's Brasil '66 doing singing about that?

I like the Brasilian rhythm that Sergio & Co. shook from that--even if it sounded a wee-bit outta place, but remember, it was on an album like Stillness, and the other songs like "Righteous Life", "Sometimes In Winter" and "Chelsea Morning" worked their way into the concept...

A polar opposite of Crystal Illusions, or a discovery of a common-thread as in a continuation of its concept--and something leaving us anticipating something in a similar vein like Pais Tropical, while Primal Roots being equally the back to basics Brasilian something we were unprepared for...

I really love "For What It's Worth" - Karen's greatest moment with Brasil '66.
It's widely considered to be a remake that surpasses the (Buffalo Springfield) original, and has a revival among 'house' music enthusiasts.
I prefer the single to the album cut. It may not be as haunting as the album version, but it has more vocal heft for radio DJs. Karen is enunciating more clearly in this take and Sergio's funky Fender Rhodes break is pushed to the forefront so you can really hear it (it's way down in the album).

To my knowledge the single mix has never been available on CD or YouTube.

Staff member
Site Admin
I don't know if we've ever compiled a master list of Brasil '66/'77 singles that had unique edits or mixes. It certainly would be interesting to see them all in one place. For a few of these, I am putting them on my want list for a possible trip I may be taking in May, to a store that specializes in 45RPM records. (I have to see if they have a broad selection, vs. being focused on one particular style, sort of the way Val Shively's place is primarily about R&B, doo-wop and northern soul).

Michael Hagerty said:
While it's an interesting production, I always thought "For What It's Worth" was a misstep for Sergio. A cover of a three-year-old Top 40 hit that was about the 1966 Sunset Strip riots. Yeah, you could apply it to Kent State, but what's Brasil '66 doing singing about that?
Click to expand...

Couldn't they have just liked the song?
You must log in or register to reply here.