Favorite Burt Bacharach song, no matter who did it.

Thread Starter
Staff member
Moderator
We had a thread a few years ago on lesser known Burt Bacharach tunes, but this one is about your favorite of ANY Burt Bacharach song no matter who did it.

My example is "I Say A Little Prayer". I've got at least seven versions that I really like:

Very hard to choose just one from such a prolific songwriter...

My favorite version is the rocking version from the group Smith. I love the way lead singer Gayle McCormick belts out "BABY IT'S YOU!!!" at the close of the song. chills...

But the Carps version is one of my favorites with Karen "Neva!! been true..."

Burt wrote a lot of memorable tunes. One that I like by multiple artists is "The Look Of Love".

I love "Knowing when to leave" By Bacharach himself plus by the Caprpenters as well as The BMB and Helen Reddy I love also "I Say a little prayer" by Bacharach as well as by Aretha Franklin ( her Version really touches my soul for some reason in a good way of course) also by the BMB . Johnny Mathis and obscure Moog synthesizer artist Christopher scott and another favorite Is the obscure "Paper Mache" by Dionne Warwick and the aforementioned Christopher Scott and Floyd Cramer and "Theres always something there to remind me" by Naked eyes as well as the BMB ( which is the first version I heard and to me Definitive instrumental version) and again Christopher scott gets another mention here his Switched on Bacharach albums are to me very addictive there are more but these are just my personal picks as always Your mileage may vary

My favorite Bacharach tune is Don't Go Breaking My Heart...most versions seem to be kind of sentimental, and I don't really care for those; but Herb's version on SRO had a totally different take, and to me, it's one of the best things he's ever done. Most of the other versions were kind of like. "...well, I screwed up and I really hope you forgive me...." while Herb's version is much more of a hard sell, like "...time's a-wastin', we've got a lot of livin' to do...".

His remake of it was pretty good, too...a little more sentimental, perhaps, but still with a strong drive that most other artists seemed to miss.

Staff member
Moderator
"My Little Red Book" as performed by 'Love.' It's very cutting edge and creative. Arthur Lee later recorded solo for A&M. I read Burt wasn't crazy about the arrangement, but it's certainly unique.

Honorable mention to "Tower of Strength" by Gene McDaniel. The trombone interlude is great.

Karen singing Make It Easy On Yourself from MMM can really makes me pretty emotional. It doesn’t get sexier than that for me.
I wish there was a full length version.
Wishin’and Hopin’ Dusty Springfield
What The World Needs Now Jackie DeShannon.
A

GDB2LV said:
Karen singing Make It Easy On Yourself from MMM can really makes me pretty emotional. It doesn’t get sexier than that for me.
I wish there was a full length version.
Wishin’and Hopin’ Dusty Springfield
What The World Needs Now Jackie DeShannon.
Click to expand...

Staff member
Site Admin
I could easily list my top 25 Bacharach tunes but can't really narrow it down to a single favorite!

That overall favorite changes often but still, it's usually among my top 25. Some are deep cuts. Others were hits. Some are outside the 60s. Some were never covered by anyone else (like the tunes Burt wrote with Elvis Costello--I can only think of one cover version of some of those tunes, which were on a jazz album based on the same project), so I guess the one-offs don't count?

For the 60s tunes though, I can easily say that Dionne's reading of them for me is the definitive version and spoils me for most others. And Dusty Springfield's original performance of "The Look of Love" is so good that I don't like any other versions since they don't get the interpretation or mood right. And the same could be said to a lesser extent for others--great song, maybe Dionne did it best, but there may be a few good versions and many bad ones. So this makes it even harder to choose those that fit the criteria.

So yeah...I'm going to have to think about this one for a while...

Thread Starter
Staff member
Moderator
I might have heard Dionne Warwick's "I Say A Little Prayer" first, I'm not sure, but I know that when I got the FAMILY PORTRAIT album sampler from A&M, I was really grabbed by the song as performed by Burt himself as it opened Side Two of the record. Here's the same track from the CLASSICS 23 disc:

If you really want to get into Burt Bacharach there’s the great 3 disc set: the look of love
the Burt Bacharach collection. Just like it’s printed on the box. It has 75 songs on it. Most all of the major hits he wrote from Magic Moments to That’s What Friends Are For and most great tunes in between. I read he really had to talk Richard into letting them use Close To You for the set. B.J. Thomas, Dusty, Jackie DeShannon, Herb, lots of Dionne Warwick, and Burt himself.
Well worth the money. It was released on Rhino Records in 1998. Great thread Harry!

Thread Starter
Staff member
Moderator
I have that one and quite a few other Bacharach compilations.

Staff member
Site Admin
That Rhino box was excellent. It easily could have been a 4-CD set--I made up my own fourth CD at one point, repeating only one song from the original 3-CD set (Burt's retooled version of "Wives and Lovers" from his self-titled A&M record, only because it was so drastically different).

The Reel Burt Bacharach was a nice compilation in its day--it collected some of his music as used in films, including a demo version of "Seconds" by Gladys Knight & The Pips that I believe was supposed to be in a movie adaptation of Promises, Promises (ironic since that stage play was based on the Jack Lemmon/Shirley MacLaine film The Apartment). It was nice having all these tunes in one place.

All of Dionne's Scepter albums, and a couple beyond that, were released across four 4-album sets on CD. I believe they might have been imports, and they were affordably priced. It was nice to get clean, consistent copies of these tracks, along with the deep cuts.

And there is a long-out-of-print A&M/Kapp box set, Something Big, that gathered up Burt's own recordings.

I had a cheap 2-CD set (I forget the name of it) that clued me into this tune. The sound is so "early Bacharach" that it's unmistakably his. (The video has the song title incorrect--it should be "Look In My Eyes Maria.")

Murray said:
Burt wrote a lot of memorable tunes. One that I like by multiple artists is "The Look Of Love".

Also my favorite Bacharach song. Two other great versions are by Eydie Gorme arranged by Pat Williams and Williams own version from his "Shades of Today" album. Both versions were released in 1968.
Another favorite is Burt's "Nikki"--the ABC TV movie of the week theme. His arrangement of the strings and flugelhorns for "Nikki"-- from his 1971 A&M album-- is extraordinary.

lj said:
Another favorite is Burt's "Nikki"--the ABC TV movie of the week theme. His arrangement of the strings and flugelhorns for "Nikki"-- from his 1971 A&M album-- is extraordinary.
Click to expand...

Burt Bacharach was "old school" in the recording studio, as he wanted all musicians and singers and himself as conductor performing at the same time so that they would all musically feed off one another. A novel idea back then in the pop music field, when usually the instrumental track was recorded first and later the vocal track would be added afterwards. Burt's old school manner was certainly influenced by his early years as a student of classical composer Darius Milhaud. Burt's method worked magnificently in the studio--my favorite of all American pop composers. Of course brilliant Broadway composers such as Gershwin, Porter, and Rodgers are in a special category of their own.

Staff member
Moderator
Wow, I never gave this much thought before. It would be easier for me to pick my favorite by each artist. For example, my favorite BB tune as performed by Herb Alpert would be "Promises, Promises." That arrangement is killer. My favorite one by Carpenters is definitely "Close To You." For Dionne Warwick, I think I would have to go with "Paper Mache," I've always liked that one but I have to admit, I haven't done a lot of close-up listening to her catalog. I need to rectify that.

For Burt's own recordings, wow that's a tough one. But I think of all his solo albums, the one song that always makes me feel great is "Something Big," from Living Together. I love the way his vocals on it sound kind of unrehearsed and the trombone fills are really cool. But wow, there would be about 30 songs clamoring to be in my top five.

Mike Blakesley said:
For Dionne Warwick, I think I would have to go with "Paper Mache," I've always liked that one but I have to admit, I haven't done a lot of close-up listening to her catalog. I need to rectify that.
Click to expand...

It's worth the discovery! There are some deep cuts on there that I've only heard Burt do on his instrumental albums, or heard other artists attempt to perform. "Paper Mache" for sure is a favorite here. So is "Odds and Ends" (which only had a 45 RPM single release on Scepter), "Are You There With Another Girl?," "Whoever You Are, I Love You," etc. And it's hard not to start bouncing to "I Say A Little Prayer"--that arrangement behind her is just perfect in Bacharach's hands. I'm glad I was able to get those album CD sets when I did--there was a lot to discover.
R

I think I'd have to go with "One Less Bell To Answer" by the 5th Dimension. I had a number of Dionne Warwick albums over the years and she did not have it on any of those that I had so it was brand new to me when I heard it.
The second would be "This Guy's In Love With You" by Dionne Warwick. Herb Alpert's is very good but I heard Dionne's version long before I heard Herb's version.

Staff member
Moderator
The above proves out my theory that you usually like the first version of a song you hear better than any version you hear later.

Contributor
I've been hanging back just because I have no idea how to answer that. SO many choices.

If I have to pick one, I'll go with Aretha's "I Say A Little Prayer", which even Burt, on an NPR interview years ago said he thought was a better arrangement than his own for Dionne.

Stretching out a bit, the 1971 Burt version of "Wives and Lovers"...the sheer audacity and the opportunity to ditch arguably the most regrettable lyrics in the songbook.

I like "Are You There (With Another Girl)" by Dionne---but the Burt version from MAKE IT EASY ON YOURSELF is pretty great, too.

And "The Look of Love" is probably the sexiest song ever written. Gotta go with Sergio Mendes and Brasil '66.

Though Streisand sure tried to get there with "Close to You"....but I think that had more to do with Burt being there than the song itself:

Oh, to have watched that special with Angie Dickinson...

I have a real fondness for Jack Jones' "Wives and Lovers."

For me, it always brings up mental images of Rob and Laura Petrie. 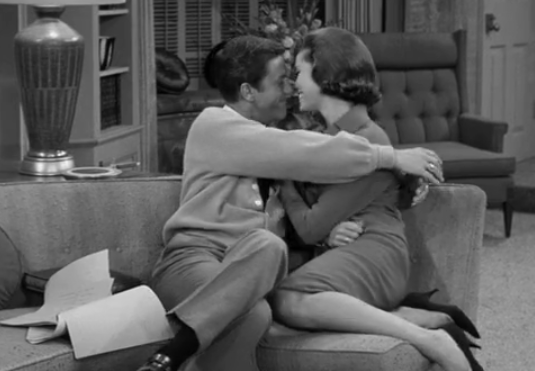