Thread Starter
Hello everyone i just purchased a pair of klipsch rp 600m's 3 days ago and was wondering what would provide enough power to make them sound great. I am currently powering them with a topping mx3. What do you all recommend for a budget of 150.

Staff member
Site Admin
The RP-600Ms are very efficient. In other words, they can output 96dB sound pressure at one watt. Many speakers these days are about 90dB efficient, although certain types can be far less. (My KEF LS50s are 85dB/watt, so I would require a much larger amp to output the same volume level as the Klipsch. My Martin Logan electrostatics are 91dB/watt efficient.) Also, keep in mind that when playing the music, you typically are using a watt or less of power on average, and the rest of the power is consumed during peaks (such as a bass drum kick). Having more power available means the amplifier will not be driven into clipping, which is when it runs out of power--usually when that happens, the amp can put out some nasty side effects which could damage the tweeter.

Also, a bit of theory behind decibels (dB) vs. wattage. The decibel scale is logarithmic. To increase your volume by 3dB, which is noticeable but not a big jump, you need to double your amplifier power. Another 3dB (a total of 6dB) requires another doubling, so, four times as much power. And so on. Each 3dB increase in sound level requires another doubling of amplifier power.

To put it into perspective, a speaker rated for 90dB/watt requires four times as much power to reach the 96dB/watt of your Klipsch speakers. With an 11dB difference between your Klipsch speakers and my KEF LS50s, I would need almost 16 times as much power to play just as loud! (Honestly, though, I had them connected to my 70 watt/channel amp this past weekend and they were plenty loud enough.)

To look at this another way, if you are upgrading an amp to get more power, jumping from the Topping's 40 watts to 60 watts, for instance, will only be barely louder. You would have to hop up to 80 watts to get 3dB of sound level increase. So if you are looking for any appreciable gain, you probably would have to go to 80 watts or beyond.

However, power output might not be the issue. I think what you're hearing now is the limitation on the sound quality of the Topping amp, not the power output. At 40 watts with a test tone on your Topping, you would be outputting over 111 dB, which is pretty darned loud! In essence, your speakers are now far better than what your amplifier is capable of--you are hearing where the amp has shortcomings. The Topping is good for what it is but also, you get what you pay for.

Herb Reichert of Stereophile reviewed these using an 18 watt/channel First Watt amplifier and found them to play plenty loud. Most of Klipsch's speakers are higher sensitivity and made to be used with lower-powered amplifiers. Many music lovers buy them for that reason. Some run low-powered tube amplifiers and the Klipsch speakers are ideal for that purpose.

$150 isn't much of a budget, unless you end up finding something used (which could be a mess of problems). I would wait it out, save up a bit more and head over to a site like Accessories4Less and check out their assortment of receivers and integrated amplifiers (which are like receivers but without the FM tuner). In fact, Yamaha has a nice receiver, the R-N303, with all the networking extras for only $269. On this page:

It's not a huge jump in power (which I don't think you'd need anyway) but it will sound better, give you more control options for your sound, and include all the networking features to make it easy to connect to your devices. There are others with a little more power for not much extra. Yamaha and Marantz are two good brands that would pair nicely with the Klipsch speakers.

Finally, consider your source. If you're playing from a CD player, you'll get the best sound quality. If you play from MP3s using Bluetooth, no speaker or amplifier combination will make it sound better--MP3 uses lossy compression, and Bluetooth is lossy as well. Better equipment will only highlight those flaws.

Report back if you have any questions!

Yes, save for a better quality amp. You’ll be glad you did. They often have excellent deals at Costo for Yamaha receivers. My friends bought one last year for about $250 and it’s decent at 80-85 watts per channel. Has many sound modes and inputs. I just bought a Klipsch subwoofer in August. It made al the difference in the sound i get from my system. It was an open box 12” from Best Buy. They often have great open box items on line that you can pick up at a store or have shipped to your home at nice discounts with full warranty.
Last edited: Oct 10, 2020

Staff member
Site Admin
Yamaha was always one of those brands that flew under the radar--they didn't stand out like the bigger brands, but they sounded nicer than what their price tag suggested. "Natural Sound" has been their motto for decades.

Marantz is doing some nice components these days also, but they're more pricey.

Thread Starter
I am currently using the topping mx3 with my klipsch rp 600m this is currently plugged into my pc through usb. My pc only has 1 hdmi and 1 vga output. i was wondering when i do get a new receiver. How will i be able to connect it to my pc.

Staff member
Site Admin
What do you use for a computer? That might help us see what we could recommend. Some receivers can take an HDMI input, but usually those are home theater receivers, not stereo. I can check a little more to see what's out there. Another possibility is that some components can connect by USB, and you'll see that component as a destination when you connect it to the computer.

Some who use a computer as a source will purchase a DAC (digital to analog converter) that give them a left/right audio output that could be fed to a receiver or amp.

Thread Starter
I use a desktop more specifically an hp pavillion p0084 595. Which is an ok computer but lacks the connections that i want. Like optical. It does however have 3.5 in and out.

Staff member
Site Admin
The 3.5mm output would work, but it would also not sound very good. Computers also have a lot of unwanted "electrical" noise (could be hum, buzzing, etc.) and you would hear that through your system.

Are you using the HDMI port? There are splitters that can extract digital audio from an HDMI signal and output it to an optical (Toslink) connection, which would plug into the receiver. I did not have much luck finding a USB-to-Toslink adapter yet, but I'm still looking.

Thread Starter
Like i mentioned i only have 1 hdmi which is used for my monitor.

Martin Medrano said:
Like i mentioned i only have 1 hdmi which is used for my monitor.
Click to expand...

One thing I'm checking to see is if a splitter might be able to split the audio from the HDMI--it would still pass video to the monitor, but would give you an optical output to send audio to a receiver.

Staff member
Site Admin
Yes, something like that should work fine. Although the one you've listed is now shown as being unavailable.

This one has better (newer) video specifications than the older ones, and shouldn't affect the quality of the video going to your monitor:

Thread Starter
So how would i use this with my desktop.

Staff member
Site Admin
The computer plugs into the HDMI IN, and the HDMI out goes to your monitor. The optical SPDIF output would go to a receiver or integrated amplifier's optical input. From there, I don't know how it will show up in your computer as an audio device (in other words, what it might be called). It may appear as though the monitor is the sound device--some monitors do have built-in speakers, so this is not uncommon. I've never tried this, so I don't know how easy it is to set up, or how reliable it may be.

I was hoping to find something for you that was easy to plug in via USB, but I haven't seen anything that doesn't cost a bit of money. The best and most reliable solution for your situation would be to add a PCI-e sound card with an optical output to your computer, since it appears your model has two available PCI-e expansion slots available. This one is under $50:

Get it now! Find over 30,000 products at your local Micro Center, including the XONAR SE 5.1 Channel PCIe Gaming Sound Card 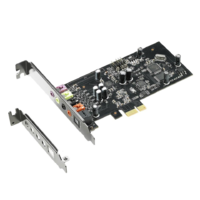 No worries about an extra sound card--you can still use your computer speakers with your existing sound (which is built into the computer's motheboard) yet you can direct your music player to send its output to this sound card for your audio system.

Thread Starter
My monitor is a samsung 32 inch. Model uj59 it has a 3.5 jack on it for a headset but no built in speakers.
You must log in or register to reply here.

New cartridge for my turntable