Staff member
Moderator
Thread Starter
Beware of unauthorized "24 bit Re-mastered" CDs of BEYOND and MAGIC MAN that have been listed on eBay. Badazz says they are not his official releases.

Staff member
Moderator
Is this that same Brazilian bootleg stuff that was circulating a few years ago?

Here's another question -- Does Badazz prefer that we address him as Badazz, or is Randy OK, or is either one fine? Just curious.

Mike Blakesley said:
Is this that same Brazilian bootleg stuff that was circulating a few years ago?

Here's another question -- Does Badazz prefer that we address him as Badazz, or is Randy OK, or is either one fine? Just curious.
Click to expand...

No those Brazilian rip-offs were apparently legally ceased & desisted.

These two new titles are being offered somewhere out of Mexico. I really wonder
how they got "the original master tapes" that they claim were used???

Staff member
Site Admin
Anyone can print anything they want on a CD cover and pirate it. A CRC code and/or spectral analysis would show if these were sourced from the old CDs, or from downloaded MP3s. Or if there are clicks and pops, vinyl sourced. No highs or lows? Suspect a cassette, 8-track or reel source.

If they were cheap enough, I'd take a hit for the team and dissect where they came from, and then publicly expose them here. Just hope the Sinaloa cartel does not end up pumping my house full of holes if I do that...

It is up to the artist or their representative to C&D sellers like that. I bet something will happen soon.

Staff member
Site Admin
While I agree that that one is not an officially-sanctioned release, it's one of the ones that fell into the "over-fifty-years, out-of-copyright" rules in the EU. Basically, anyone can copy an old LONELY BULL album over there and market them legally. There are a bunch of these LONELY BULL titles out there, many claiming mono and stereo, so they had to be sourced from old records. (I don't think they ever released any mono cassettes or 8-tracks, did they?)

Staff member
Moderator
Thread Starter
All of the Herb Alpert Presents re-issues will have the original album covers and artwork, minus the A&M logos and original catalog numbers.
C

Moderator
I wonder what the sticker on the LPs will look like. It would be neat if it would still have the ochre color.

steve so what I am hearing none of the reissues be released in the stores like best buy like they were before.

bob said:
steve so what I am hearing none of the reissues be released in the stores like best buy like they were before.

No, available in stores at the usual places and also on-line.

thanks steve for the answer

Staff member
Site Admin
I don't want to encourage the pirates, but it would be helpful if we started listing releases here that we know are not official releases. If it saves someone the money they could have used to buy a good quality, genuine release, then it's all good.

Yeah, I hate that pirated stuff. Had a friend who used to "share" movies until one day he got a nice polite letter from Universal and a visit from the FBI.

DeeInKY said:
Yeah, I hate that pirated stuff. Had a friend who used to "share" movies until one day he got a nice polite letter from Universal and a visit from the FBI.

I'm sure politeness wasn't their intent.

Can't be any worse than AT&T's recent blunder...

Staff member
Site Admin
There are two albums listed on Tidal (the streaming service) that look like pirated releases. Essentially they are The Beat of The Brass with a couple of other TJB hits sloppily thrown on. Notice, too, how the the song title "Music To Watch Girls By" is incorrectly listed. And the terrible cover art. I'm surprised that Tidal would use pirated recordings on their service. Anyone know how they could be reported? 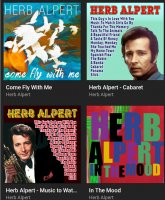 "Pirated" is an unauthorized copy or compilation of existing, released works.

"Bootleg" has traditionally been an unofficial, unauthorized release of a live recording made from the audience, or of studio demos, outtakes and alternate takes which were never meant for release.

Staff member
Site Admin
I have located these two pirated recordings on--get this--Amazon! Not only as physical product, but as downloads.

How can you help?

If all of us reading this go to Amazon, and leave a review of these items, pointing out that they are unofficial, unauthorized, pirated recordings, we can help others from supporting this label calling itself "Imex Media", and copyrighted (C) 2015 Codex. It's time we put these pirates out of business. We all know here that Herb Alpert Presents is the only official source for Herb's recordings, but we're doing our part to educate the public about these cheaply-produced items.

They throw on Bob Crewe and pass it off as Herb! Pretty dumb.

Staff member
Site Admin
I would like to know how these same two pirated CDs (which have the same contents) are on all of the streaming services.

I have benn doing this I contacted besy buys custormer service and told them they hace some listed as well as for another group the beatles, years ago they had the beatles around the world which included the tokyo concert and around the beatles and they had it in their stores, bad picture quality and I also contacted amazon and eby, if we as a group do not tell the people. and put a stop to this. no one else will.

Staff member
Moderator
Thread Starter
The HERB bootlegs on i-Tunes are in the process of being BOOTED OFF!

Staff member
Site Admin
About time. Now they need to get those off of Amazon and the other streaming services.

That Lonely Bull LP on that dicey WaxTime label could go next. They are notorious for releasing out-of-copyright titles from very questionable sources.
You must log in or register to reply here.