Thread Starter
Staff member
Moderator
I don't own this 45, and I would like the answer to a question about it.

Richard remixed the recording and we know that virtually all CD versions (except the EMI YESTERDAY ONCE MORE set) have the synthesizer whine plus four notes toned down. David Grant's old site says that the 45 single was the same as the album version, yet both the Japan single box and The Complete Singles from public TV use the altered version.

Can someone with the 45 confirm this one way or another?

I wonder if there were perhaps two pressings of the 45, one with the longer synth part, and the altered one that replaced it?

I have the 45 promo of Those Good Old Dreams Stereo/Mono version.
I can confirm that both sides have the single version there is no high pitch whine from the synthesizer like what you hear on the original LP.

This is my single 45 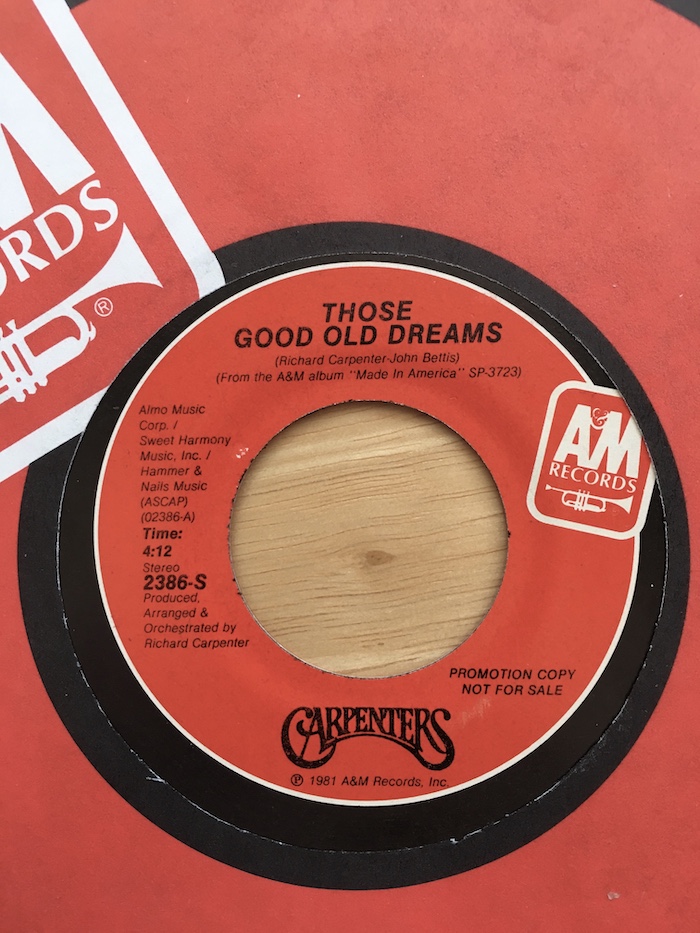 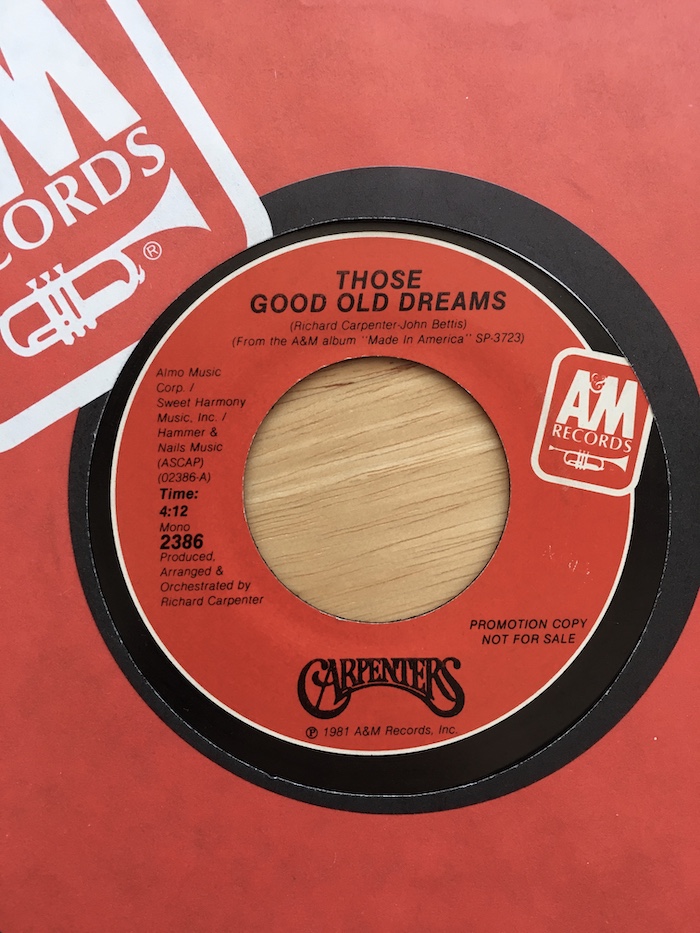 Thread Starter
Staff member
Moderator
Thanks Rick. Now I wonder if there was an early single release with the album version on it.

It's possible. I don't have the original US single 45 b/w When It's Gone so it's possible that could have the LP version. Maybe someone else here has that and can confirm.

Hi Harry. I think I can solve that question.
I have the US single with When It’s Gone as the b side and US mono/stereo promo. Both the same, synth taken out. I also have the Japanese version with I Just Fall In Love Again as the b side. Those Good Old Dreams is the album version with the synth left in, very bright and prominent before finger snap. Hope that helps!
Ken

Thread Starter
Staff member
Moderator
Thanks Ken. So according to this information, the Japan Single Box then used the wrong version for their mini-CD, and the Public TV version is correct.

That’s true. The Japanese Singles box is the same as the US single version without synth. Even the remastered vinyl box set version of MIA,
has the altered version on it, not the original from 1981. Very odd to me. I think it’s better than the remix. So I guess it’s only on original lp, Japanese vinyl single, and the EMI cd collection. Tinkering in the 80’s!

Richard must have really disliked the album version for it to have been removed on the US singles.

I’ve gotten so used to hearing it on cd or the remastered vinyl that I didn’t even notice the synth was missing. I haven’t played my original lp in 30+ years. If Harry hadn’t brought it up again.... the original Japanese MIA lp has the first mix too. The Alfa/A&M version. Best Carpenters vinyl ever made. Mid 80’s. Clean and quiet.

Thread Starter
Staff member
Moderator
It's also present in its original state on the YESTERDAY ONCE MORE video, later re-titled GOLD. The only problem there is that it fades early to allow for a video segue, and adds a repeat of the opening riff in order to allow more scenes of the pressing plant.

A while ago I extracted this track from the Gold DVD and put it in my iTunes library and called it the "video edit" it has a longer intro than the album or single version. The album and single have Karen coming in at about 16 sec but the video version Karen comes in at about 22 secs.

Rick-An Ordinary Fool said:
A while ago I extracted this track from the Gold DVD and put it in my iTunes library and called it the "video edit" it has a longer intro than the album or single version. The album and single have Karen coming in at about 16 sec but the video version Karen comes in at about 22 secs.
Click to expand...

An extra four bars were added

Well I'll be... I NEVER noticed that about the video version let alone the original LP/Remix difference! Not sure which I prefer... Listening to both, the LP ones does sound more "whiney" and the remix smoother... Maybe it's because I'm more used to hearing the remix version!

I've listened to a few in my collection too... The UK promo, Portugese and Netherlands 45 releases all have the synth left in as on the original LP.
Last edited: Aug 2, 2020
You must log in or register to reply here.
Share:
Facebook Twitter Pinterest Email Link
Top Bottom