Staff member
Site Admin
Thread Starter
Those reel decks are fun to play with (recording and playing back some favorites), and nice to have around if you encounter a pre-recorded reel of an album you can find no other way. Thing is, all those mass duplicated reels have a weak high frequency response and sound good at best--a clean record will trump it every time. (That is typical of all high-speed mass-duplicated tapes, and the practice carried over to 8-tracks and cassettes as well.) To bring this full circle, I once bought a reel of Whipped Cream and the tape was so brittle, the beginning snapped off with barely any pressure on the tape.

Just got my vinyl today. Had it shipped to the office. I unpacked everything to check it and my coworker didn't know who Herb was so I had to try to explain things. He was "shocked" at the album cover. He said he could understand why guys would buy it for the cover alone.

Where to start. There is a color variation on the cover. Not as extreme as on the CDs but it's there. More brown/red.

The main thing I'm noticing in the sound is more depth. At least that's how I'd describe it. The trumpet is a bit warmer and in some places I'm hearing more of certain instruments than I heard before. On the vintage album some tunes seem to be louder than others. New one has the loudness more balanced.

Staff member
Site Admin
Thread Starter
Mine will probably arrive next week. With the Xmas album out, I am waiting for that to arrive so I can write it up as well. Good times!

I am also getting the Charlie Brown Xmas reissue on green vinyl. (I realize it's not the 2-45RPM LP set but I can't afford the king's ransom for a used copy if it.) I am hoping the vinyl is quiter than their other reissue of A Boy Named Charlie Brown (which was on orange vinyl). The nice touch is that on the latter, it is in the originally released LP sleeve, and includes twelve 8x11 lithographs of original Charles Schultz art. Very cool! I'm hoping they did something similar for the Xmas album also.

Staff member
Site Admin
Thread Starter
Many Barnes & Noble stores are stocking both Come Fly With Me and Whipped Cream on vinyl. I did not yet find the Xmas album available in stores, but will post a note here when they do.

If anyone else spots new vinyl at their local retailers, please list them here so we can put together some sort of buying guide for our members. There are plenty of online sources for this vinyl, but having them available at retail puts these right in front of customers who may not even know that these have been reissued. An important step in promoting these albums!

Staff member
Site Admin
Thread Starter
For those who live in Chicagoland, the online retailer MusicDirect has a retail outlet where you can pick these up. Call ahead to make certain they have these available; if not, they can order it in within a day or two. Just don't take a lot of money with you, or set yourself a budget beforehand. With all the new vinyl and audiophile equipment on display, it is hard to leave there empty-handed.

Moderator
I had to return my copy of Come Fly With Me to B&N because of terrible surface noise on the vinyl. They didn't have another copy in stock but did order a new one for me.

I did see the LP version of Christmas Album there, which was in a special Christmas music & DVD section.

Staff member
Site Admin
Thread Starter
I am going to find out which pressing plant these albums are from. Capacity is stretched at the moment, which is why these releases were delayed compared to the CD versions. Some plants out there are doing great work, and others....not so much. And there is always a fluke or two in a batch, even from the better pressing plants.

Many of those who are into newer vinyl always ask about who mastered them, and where they were pressed.

Question: I remember vinyl being staticky (if that's a word) back in the day. Would the heavier vinyl be more so? I noticed that there is enough static that dust really wants to fly up and stick when taking these out of the cover. In fact the hair on my arms stood up (there's an odd mental picture). Not getting surface noise though.

Captain, I am surprised if is new vinyl 180 gram, there should be no surface noise, unless maybe they used recycled vinyl, now I have a copy of the picture disc re whipped and that has no surface noise unlike the ones back in the 80's and my phono

cartridge is the audio techinca AT 440MLA. so that is why i would prefer the CD version, because you get a true digital sound and a booklet. the last vinyl I bought was the newer vinyl the lonely bull at half price books. on wax time records the

yellow cover. all that came with was a poly lined inner sleeve and an ad on cardboard advertising the other albums avalible.

DeeInKY said:
Question: I remember vinyl being staticky (if that's a word) back in the day. Would the heavier vinyl be more so? I noticed that there is enough static that dust really wants to fly up and stick when taking these out of the cover. In fact the hair on my arms stood up (there's an odd mental picture). Not getting surface noise though.
Click to expand...

Static always was a problem for my records, even back in the 80s. And it is especially bad in the winter when the house is dry--sometimes I really have to tug on the sleeve to get the record out of it. I have a Zerostat gun from back then that neutralizes it, but those are hard to get now. (They were dirt cheap back in the 70s and 80s; today they want a small fortune.) As for the records today vs. my older ones, the static is about the same for all of them.
A

Staff member
Site Admin
Thread Starter
Spanish Moon may have been the last of his A&M albums on vinyl.

Almo Sounds had a couple of vinyl releases but I don't think Herb's albums were among those. One of those was the first Garbage album. I saw it at Tower and wasn't quite interested... then the album really grew on me and by that time it had sold out. Now, try finding one under $80. I am glad I did buy Live's Throwing Copper that day, however. Never saw it again until recently. 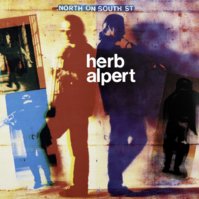 "Under A Spanish Moon" was the last vinyl that I saw in March 1989 when The Turntable record shop in Midland, Michigan sold the last of the records!! Matt Clark Sanford, MI
C

Moderator
My Abstract Heart (1989) was the last Alpert vinyl LP.

Staff member
Moderator
I REPEAT - NORTH ON SOUTH ST was Herb's last A&M U.S. vinyl album. It was released on March 5, 1991. What I posted above is not just a graphic, it is my album cover. 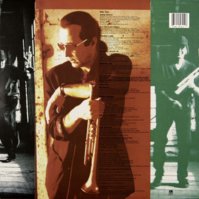 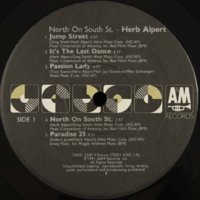 Staff member
Site Admin
Thread Starter
I had my timeline mixed up in my head.

Moderator
Ack! My bad. I also have NOSS on vinyl.

Captain Bacardi said:
Ack! My bad. I also have NOSS on vinyl.
Click to expand...

Are we trying to say our memory is going to hell as we get older? (I certainly am!

I often have trouble remembering the order of Herb's albums after about BULLISH. They tend to run together in my brain. And as far as vinyl goes, I have up through MY ABSTRACT HEART but not NORTH ON SOUTH STREET. By then, the CD age was well established and the vinyl was pushed to the side. In fact, my copy of MY ABSTRACT HEART is still sealed in shrink. For NORTH ON SOUTH STREET, even the 12" mixes were more plentiful on CD - I have both "Jump Street" and "North On South Street" on CD, but not vinyl.

Staff member
Site Admin
Thread Starter
Around here, the North on South Street 12" mixes on vinyl were as common as Eagles Greatest Hits LPs in the dollar bins, especially promo copies. For a while that's all I'd see in terms of Herb 12"ers (aside from the usual highly trashed 12" singles of "Rise").

I found a sealed Bullish several years ago but still need to find sealed of the rest of those. North on South Street seems to be import only at this point, where shipping is more than the record. The Spanish Moon I have looked nice, but had a ton of groove wear once I got it home. So essentially, if I don't find it sealed, I don't buy it now. So I overpay for a sealed copy? In theory, not really. I'll often have to go through three or four used copies that look scratch-free but either have too much noise or way too much groove wear to be acceptable.

BTW, I did see Whipped Cream at the Livonia Barnes & Noble yesterday, while taking a break from horrendous traffic on I-696 and I-275. (For a 45 minute drive, the commute was calculated to be 75 minutes additional.) The LP jacket has a similar brown tint to it, but it is not too far off the mark. Next to an original I'd probably notice it, but otherwise, anyone buying it today (beside us) would not even know, or care. No Xmas album though. Just a half dozen of the usual popular holiday culprits on vinyl. That Adele thing was staring me in the face at every turn, so I bailed.

Wonder if we will get a vinyl copy of Second Wind eventually? I'd love to get my greasy little paws on that.

DeeInKY said:
Wonder if we will get a vinyl copy of Second Wind eventually? I'd love to get my greasy little paws on that.

Got the mp3 of Sugar Cane on my phone. I love that tune!

My review of the vinyl box set!

Making your own Custom CD s from out of print Vinyl, Cassettes and Other Sources
2