¡Que siga la fiesta! · From USA
Village idiot.
Staff member Site Admin
My quest for "clean records" started as far back as the early 1980s. Let's be honest--pops and clicks have affected records ever since the Edison cylinder. I have purchased many records that had almost no noise whatsoever, whereas other records really needed some serious help, even when they were first played out of the shrinkwrap. Once I got into purchasing used records, the problem could sometimes be worse, depending on condition. That and records I had from years past, which were never cared for too well, certainly needed some attention.

Physical cleaning is part of the battle. An Audioquest carbon fiber brush, a Discwasher, etc., will knock off loose dust and dirt but does nothing for the crud embedded in the grooves. I'd started with a record vacuum back in the early 90s, and progressed to an automated ultrasonic cleaning system not too long ago. Getting the records cleaned does more than reduce noise--it lengthens the lifespan of the record as well as the stylus playing it. Dirty records act like sandpaper, in other words, and embedded dirt pressed into the grooves will further damage the vinyl itself.

After cleaning, I replace the original sleeve with a "rice paper" sleeve, to keep any dirt or dust from the original sleeve from getting back on the record. (The original sleeve is then stored alongside the new sleeve in the LP jacket.) Since record cleaning is as much science as it is experimentation and guesswork, I will leave that discussion for another time. 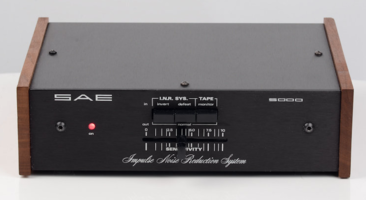 KLH (Burwen Research) also sold a similar device, the TNE 7000 Transient Noise Eliminator, which I'd only heard of but did not purchase.

Both units worked on a similar premise--certain types of noises could be eliminated safely. Theory being greater than execution, the SAE 5000A did work, but after the novelty wore off, it could be tricky to use on some recordings, impossible to use on others, and it added an overall faint dullness to the sound that made it suitable only for severely worn records that were already in sad shape, or for making cassettes for the car.

Once software solutions came along, via plugins for various audio editors, my technology game improved somewhat. I began using the professional Waves click and crackle plugins rather early in the game and while they worked better than the SAE unit, I still heard artifacts I didn't like. In recent times I have also tried the Izotope plugins and didn't fare much better. They could work, and to a casual user they were probably good enough. Yet once the shortcomings are pointed out, they are hard to unhear. I've heard samples of those $59 "vinyl cleanup" software packages and the results, at best, are dismal.

Enter 2017, and the SweetVinyl company. At the audio shows, the SweetVinyl team debuted a device that would clean up clicks and pops, using a dedicated component running proprietary software. I didn't hold out high hopes for it at first, due to past experience with software solutions, but original write-ups from audiophiles with better ears than mine were extremely impressed.

Usually, the rooms at AXPONA were too busy to get a good demo but in 2019, I finally had a chance to sit down and hear a demo of it in action. Prior to the "official" demo, a quiet classical recording was playing from vinyl from a nearly silent background, without the slightest tick or pop present.

The official demo consisted of a used copy of Steely Dan's Aja. Full of numerous pops and clicks, with SweetVinyl's Leo Hoarty demonstrating how the system worked. Here is a video of that demo:


The SugarCube is a software solution that runs on an internal computer, processing audio at 24-bit/192kHz resolution. The software is proprietary, developed and refined in-house. The unit can connect into an audio system in a variety of places, the most common being between the phono stage and preamp, or in a system's tape monitor or external processor loop. The higher models in the product line have digital outputs that can connect to a DAC (digital to analog converter) or a computer via USB, either for playback or digital recording. And speaking of recording, the SC-2 models (the SC-2 Mini and the SC-2 Plus) will record audio to a USB thumb drive, with the ability to look up the album via the Internet and split and tag the resulting files.

All units connect to your home network, either by WiFi or Ethernet, so you can control the unit's settings from a smartphone, tablet, or web browser.

The SugarCube couldn't be easier to operate. Click and pop removal is engaged from a button on the front panel, and a rotating knob lets you set the amount of removal. When powered up, the initial setting is at the middle of the range. If you find the unit is removing parts of the music, the control can reduce the processing level. Likewise, if you still find noise getting through, increase the level until the noise is eliminated.

The "Plus" models (SC-1 Plus, SC-2 Plus) also offer SVNR--SweetVinyl Noise Reduction--which can remove some examples of background noise. To use this, engage the SVNR system, start playing the record via the lead-in groove (so the system can take a sample of the vinyl with no music), and it automatically adjusts to work on the background noise. You can adjust the level of noise reduction through a slider. Controls for SVNR are available only remotely (phone/tablet/browser).

The overall product lineup consists of six models. The least expensive is the SC-1 Mini, which offers the click and pop removal. The SC-1 Mini/Phono adds a phono preamplifier, which is great for someone with an auxiliary input on their component but lacking a phono input. The SC-2 Mini adds the recording and metadata-lookup capabilities, and the SC-2 Mini/Phono again adds a phono stage. All of the Mini models are in a narrow "desktop" size. The SC-1 Plus and SC-2 Plus are packaged in larger enclosures. Both add the SVNR feature and digital outputs (optical, coaxial, USB), digital input (which can be attached to a computer), and the SC-2 Plus adds the recording/metadata-lookup.


But does it work?

I have had the opportunity to live with the SC-1 Plus for a couple of months, the result of more than a year of watching for the right deal to come along. SweetVinyl, unfortunately, is sold out, the current supply chain issues causing a delay in manufacturing. And used units are few and far between--I'd had a saved search on HiFi Shark for . It was an eBay auction, with few bids, and the help of an auction sniper program that I was able to score one at a substantial discount.

Since then, it has lived in my system. And having used it continuously, I can't see listening to records without it. It's no wonder these rarely come up on the pre-owned market--they work very well. This is the first product I have used that leaves no trace of itself on the sound quality. The internal digital converters themselves are high quality and even with those, owners and reviewers with better ears than mine heard no alteration to the music. I run mine to my external DAC for good measure and I, too, cannot hear any difference between the input and output. 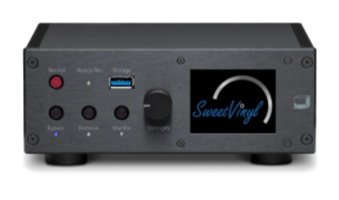 I've spent the past couple of months rediscovering many records in my collection I had given up on. Some were underwhelming used record purchases that cleaned up nicely, the clicks nicely removed with no ill effect. Even on new vinyl that might have the occasional tick here and there, it works exceedingly well. I find it indispensable, to be honest.

I have not yet tried the SVNR feature too much, nor have I had time to get it properly connected to my streaming computer so I can record directly to a disk. But in initial testing, the SVNR works less intrusively than any other background noise reduction I have used. I still find it can give the music a "closed-in" feeling if it is applied too heavily. Yet it works well on older records that might have a lot of noise.

Is the unit's noise reduction perfect? No. There are still types of noise that cannot be cleaned up by any method. Scuffs in the vinyl, which result in a sort of "white noise," cannot be removed. Neither can groove burn (worn vinyl). Both do not contain the type of information the system would need to correct it, as it would be too hard to distinguish these noises from actual music.

Yet the noise it does remove it impressive, if not remarkable.


The SugarCube in action!

I have uploaded a series of short videos to YouTube which demonstrate the click and pop removal operation of the SugarCube. Rather than post five videos, I have combined them into a single playlist. Below the video are some details about each video.

I had originally intended to use the SugarCube to archive records to digital, primarily, the hundreds of records I own that have never had a digital release. This would save me many hours of having to apply software noise reduction, often adjusting it for each track to get the most out of it. After living with it in my system for a couple of months, I find I am using it on everything. It's that good. And it is also that convenient, as I no longer have to go through all the hoops of transfering a record to digital, processing it (sometimes section by section), splitting and tagging the files, and storing them on the server. I can put on a record now and play it in real time, with the clicks and pops handily removed.

This is definitely a game changer in vinyl playback.
Click to expand...
You must log in or register to reply here.