Thread Starter
I've noticed online that there are 2 LP sets that say they are presented by Sam Riddle... The one has a black & yellow label and is titled "Navy Presents" and the other is a red & white label and titled "Sounds Like The Navy". However, the red label one has different tracks to the Navy Presents one... What's the difference between these two LPs?

Wow I've never even heard of the second one...where did you come across it Billy?

Thread Starter
Saw it on Discogs, and thought it was strange there's a different track listing, plus the year is 1971 and the original Navy Presents is 1970... Makes me think it could be fake?

Staff member
Site Admin
These Armed Forces records were offered to radio stations as a way of promoting recruitment in the different branches of service. The Army, for a time, used DJ Robert W. Morgan to host a 25-minute show weekly. Each side of an LP held a full 25-minute show with varied artists.

The Navy used two different titles for their shows, as far as I can tell. When the Carpenters were on that 1970 show, the show was called "Your Navy Presents". When I started working in radio, the Navy shows were called SOUNDS LIKE THE NAVY, still hosted by Sam Riddle. Here's a sample cover of those: 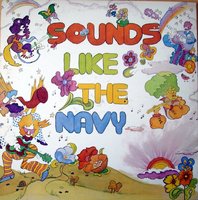 It appears that Carpenters may have revisited Sam Riddle the following year after some more hits.

As explained below, the second version is re-edited with regular A&M recordings.
Last edited: Jun 3, 2019
A

I own this version. I bought it back around 1987 or thereabouts via Goldmine. It’s the same interviews just re-edited with the A&M official studio tracks. It’s not the ‘live’ stuff.

There’s really nothing ‘new’ on it other than Sam Riddle doing his banter. The only ‘live’ in the studio recording used for this version was ‘Flat Baroque’ from the original 1970 ‘Navy Presents’ show.

Staff member
Site Admin
Thanks for clearing that up. I couldn't imagine a second set of live recordings.
A

Yeah, that’s what I was hoping for when I bought it at the time. The banter is even goofier than the one from 1970. I remember they ‘created’ a little thing where Richard had apparently jumped overboard, Sam Riddle is yelling, ‘Richard! Richard!’
Ugh. Lol.

A&M Retro said:
I own this version. I bought it back around 1987 or thereabouts via Goldmine. It’s the same interviews just re-edited with the A&M official studio tracks. It’s not the ‘live’ stuff.

There’s really nothing ‘new’ on it other than Sam Riddle doing his banter. The only ‘live’ in the studio recording used for this version was ‘Flat Baroque’ from the original 1970 ‘Navy Presents’ show.
Click to expand...

Could you post the full tracklist for us, I'm curious to see what else is on there.
A

newvillefan said:
Could you post the full tracklist for us, I'm curious to see what else is on there.
Click to expand...

Sure! I need to dig it up, but will find it.

newvillefan said:
Could you post the full tracklist for us, I'm curious to see what else is on there.
Click to expand...

Reason to Believe
Get Together
Flat Baroque
For All We Know

Another Song
I Kept On Loving You
We've Only Just Begun

Love is Surrender
Ticket to Ride
Close to You

Sounds like the Navy is on eBay right now.

Contributor
Each branch of the Armed Forces (except, I believe, the Marines) had these programs, provided free to radio stations around the country, tailored to different radio formats. They were all produced by Roger Carroll Enterprises.

Roger was a longtime air personality (since 1959) at KMPC, Los Angeles, and was the staff announcer for the Smothers Brothers, Glen Campbell and other popular TV shows.

The programs (25 minutes each) counted as Public Affairs programming when the FCC required every radio station to program several hours of public affairs a week. These qualified since they included no commercials other than plugs to join a branch of the service and were an easy alternative to producing your own Public Affairs show. Plus they sounded (sort of) like regular music programming. They tended to get played on the weekends early in the morning or late in the evening.

They'd been around in some form as far back as the late 1950s, but around 1969 or so, Roger got the contract to produce them all.

Roger, who had been doing Armed Forces Radio shows in addition to his KMPC show since the early 1960s, hired a group of L.A. disc jockeys to host the shows. Here are the ones I remember plus the ones I've been able to track down online in the past few minutes:

There were also versions for country stations, but I'm having trouble finding any of those and my memory of them is fuzzy.

Roger, by the way, is still alive and working on new projects at age 90. He currently has a website that streams many of these shows plus Armed Forces Radio programs that he and his friends and co-workers did back in the day: https://rogercarrollbestsoundsintown.com/

Staff member
Site Admin
The Sam Riddle Navy shows were all 15 minutes - at least in the early to mid 70s.

Harry said:
The Sam Riddle Navy shows were all 15 minutes - at least in the early to mid 70s.
Click to expand...

I stand corrected. I know the Roger Carroll, Robert W. Morgan, Billy Pearl and Wolfman Jacks were 25 minutes (formatted for stations that carried five minute network newscasts at the top and bottom of the hour), having played them. For some reason, we didn't get the Sam Riddle shows (they were mailed to the stations once a month on two LPs, with one show per side).

Staff member
Site Admin
That's OK - we all manage to mangle unimportant factoids from the past. The station I worked for didn't run them at all, but they were sent there anyway. Our management was a bunch of hippie types who weren't all that enamored of the armed forces anyway.
A

Glad you found the track listing! I'm still looking for my copy. Now that I see 'Get Together' is on it, I want to know which version is actually on the one I've got. I think it's the "Offering" version with Richard's lead. I haven't played it since the '80's, but I think it's the studio one.

I just got in the mail today a copy of the Carpenters “Sounds Like The Navy”. Couple of interesting things:

-in comparison to what is on “From The Top”, the Carpenters comments have been edited (in one section you can even hear the record with Karen’s answer having a few loud pops) and in some cases are sayings that were not in the original interview and Sam Riddle is reading a very different script.

-“Flat Baroque” is a version that I have never heard before. I’ve never heard it on CD, but it seems to be from a needle drop. Possible the “Your Navy Presents” version. The other tracks on Program 1 appear to be modified albums cuts, and by modified, it sounds like they were processed by A&M with either CSG or mixed more to the Center to give the songs that mono sound but still have some stereo. The record does say “Compatible with stereo” so I guess they were making sure that the record was mono compatible for AM stations but could also be played on FM stereo stations.

-The sound quality is ok. But that’s to be expected when you are dealing with a record where you are a great number of analog copies away from the originals. Sam Riddle was probably using carts or vinyl copies that A&M had sent over to make his master and not the original masters (except for “Flat Baroque” which he probably owned).

-“All I Can Do” From ‘Offering’ opens and closes each program with Sam Riddle talking over the ‘wah-ah-ah-ah’ section.

“I’ll Never Fall In Love Again” is an edited version from the self-title album’s “Bacharach-David” medley. Similar to what Richard would do later with “White Christmas”.

What was their obsession with Cinderella Rockafeller in the early days and does anyone know the story of how/why they came to include it in their early live shows?

I would like to know more as well. I believe it was the guy who wrote the Downy Soft fanzine in the mid 70’s that told me they had considered releasing it as a follow up to Ticket To Ride as their next single, or b side anyway. I’m glad that never happened. It’s too much of a novelty tune and ok for a live performance I guess. An odd song to me.

GDB2LV said:
I believe it was the guy who wrote the Downy Soft fanzine in the mid 70’s that told me they had considered releasing it as a follow up to Ticket To Ride as their next single, or b side anyway. I’m glad that never happened.
Click to expand...

Good God perish the thought! They would likely never have been heard of again as I don’t think Herb could have afforded to give them a third chance.

Exactly!!! When I first heard it back in 1975 I thought it was kind of fun, something different from my favorite group. Now I’m so thankful they never put it on anything but the Your Navy Presents. It’s pretty bad. Lol I don’t think they would have made a 2nd album if they tried to release it even as an album cut. Maybe in a box set as a historical item, but that’s it. Can’t Buy Me Love too, without the screaming. I laugh every time I hear it.

Contributor
I'm sorry to report that Roger Carroll, whose production company was responsible for these programs, passed away on Tuesday (7/30). He was 90.
You must log in or register to reply here.

Dec 27, 2020
Jorge
David Pomeranz Interview on Carpenters and "Tryin' To Get The Feeling Again"