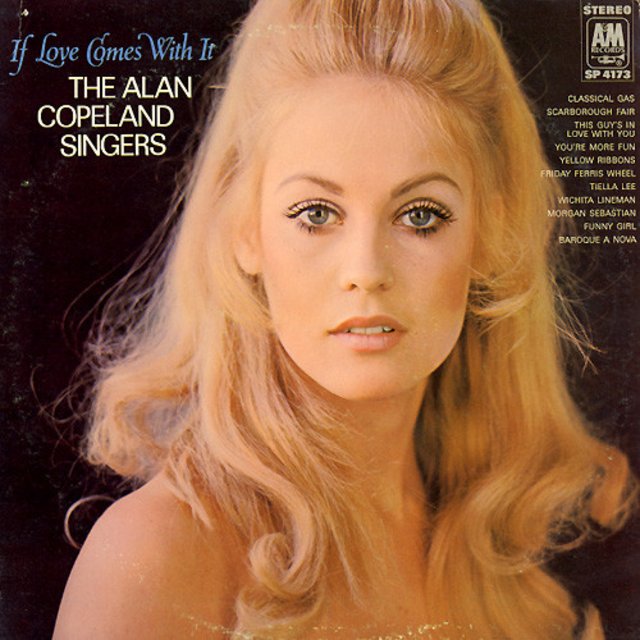 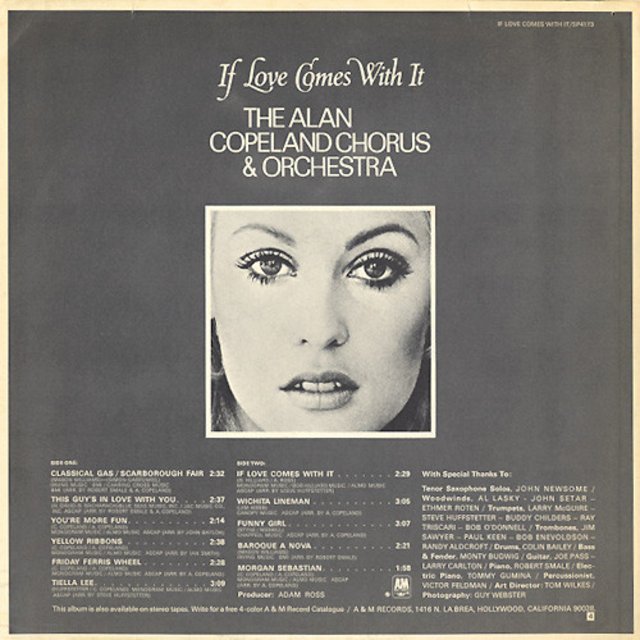 Staff member
Site Admin
Nothing ever really registered for me from this album, though I might have heard the "Classical Gas / Scarborough Fair" mash-up somewhere. I'd heard the name in connection with the singers who appeared weekly on the RED SKELTON show.

Then in 2005, somehow we got word here that the Japanese were re-releasing the album on CD and I decided to make a blind buy. Though I don't listen much to the full album, I really like the afore-mentioned mash-up and the "Baroque-A-Nova" song.

The 2005 CD, UCCU-3003, came in a standard jewel case with an obi from the "Finger-Snapping-Music" series, and a decent attempt at an A&M ochre label (more like a light-mustard). 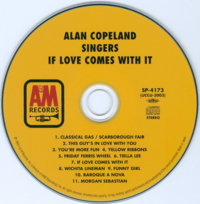 The mashup of Classical Gas/Scarborough Fair and Baroque A Nova both got lots of airplay in this area, probably because of the association with Red Skelton whose show was very popular at the time. It seems to me that they also did a mashup of the "Mission Impossible" theme with another song that was getting airplay as well.

I was going to post 5 songs from Readers Digest 6 record box set "Sweet With A Beat" (from 1971) which has The Alan Copeland Singers doing "It's Impossible", "Wives And Lovers", "I Have Dreamed", "Time Alone Will Tell" & "One Day Of Your Life" BUT my brother cannot post my things on YouTube.

I do notice this album is available as a Digital release on Amazon. I just may buy it there are other rare A&M ones Like Nick DeCaro's Happy Heart there too

Thread Starter
It's no secret I have a huge soft-spot for non-rock pop music of the '60s. It's taken some time, but I'm slowly warming to this LP, which I picked up a few years ago. (I would prefer to bury the high tenors more in the mix -- but I think they pushed these voices given the "Brian Wilson" influence among other things...)

One thing that genuinely bothers me about the LP is that the rear cover is the same photo as the front cover -- albeit cropped and in b/w. Such a move visually cheapens the LP and takes it into K-Tel territory. Tom Wilkes was responsible. This was clearly one of his least impressive jobs and frankly I'm surprised A&M didn't reject it. I mean, good grief, Guy Webster probably took 40 shots of the model -- at least give us a different pose for the rear cover.
You must log in or register to reply here.