Record and tape clubs, video clubs...which did you use?

Thread Starter
Staff member
Site Admin
Since record clubs were brought up in other threads, I figured it might be fun to revisit the topic here in its own thread.

There have been a lot of clubs over the years, both for music and video. My record buying years coincided with the prime Columbia House era, and I never really knew of many others that had existed earlier. So anyone with insight into those older clubs could make this discussion really interesting!

My first was RCA Music Club 1971. I got cassettes of Bee Gees 2 Years On, Elton John Tumbleweed Connection, and Iron Butterfly Metamorphosis. I was a freshman in high school. 2 out of three were great. Lol
I used RCA again in the late 90’s to early 2000’s for box sets. They often had buy 1 get 1 free. Great deals. They faded away, just like chain music stores. I believe I used Columbia house for one cycle in the 80’s. I hated those post cards every 6 weeks. If you didn’t mail them back right away, they sent and billed you their pick of the month. Too much work to return them.

Thread Starter
Staff member
Site Admin
Music-wise, I never subscribed to Columbia House, although many times I used to glue the stickers onto the cards to pick my favorites from the bunch. Since my tastes were always outside the mainstream, it was sometimes tricky to find enough to fill the card for my free selections.

In the 90s, though, I did take advantage of the BMG Music Club and probably joined them a couple of times once my required purchases were completed.

There was another music subscription service that spun off from them, but I can't remember the name of it now. (I remember getting some Elton John SACDs from them, and a few others, since the prices were so inexpensive.)

The record club I belonged to in the late 70s really wasn't like a traditional club. I believe it was called the Discount Music Club, and the "fees" were to cover the cost of the Schwann Catalog they would send out quarterly, using a custom-printed rear cover with all of the discount prices listed. You could order anything in the catalog and get the discount.

The club that amazed me the most was the Columbia House Laserdisc Club. Many of us on CompuServe's Consumer Electronics--Video forum signed up and our first three selections were of course the letterboxed Star Wars trilogy (the originals with the 20th Century Fox logo on top). After paying for a couple of the required LDs, though, we started getting catalogs that had some insane discounts and specials. I think I once got about six or seven titles for $50, which seemed like some sort of clearance sale. I never paid full price for a LD--even newer releases were discounted. It was a quick way to build up a collection.

I have about 60 LD titles myself. I haven’t turned my player on in over 15 years. It doesn’t have a HDMI output. It does play both sides without turning it over though. Lol
It’s a Panasonic. I have a mix of music and movies, including a couple of Carpenters titles. Live In Japan was one of my first purchases. Only 2 of the 3 Star Wars discs though. Fun topic Rudy.

Staff member
Moderator
I used to constantly peruse the stiff record club ads in the center of TV Guide in many week's magazines. It was always a challenge for me to come up with those 12 or 13 records for a penny. There wasn't all that much that I really wanted, even for that price. And I always thought that it was a "too good to be true" deal, especially when you read the terms and conditions. The idea of a chosen record of the month being automatically sent - and at essentially list price, plus shipping and handling, seemed a terrifying prospect to me.

So I never joined the Columbia or RCA or Capitol record clubs, but I did enjoy looking at the ads.

Sometime in the late 60s, I DID decide to join a sort-of "anti-Record Club" record club. It was called Record Club Of America. Their deal was that you could join up without any commitments - and without the initial perks. Basically, it was just a catalog outfit that sold records and tapes. I bought a few things from them and, as usual, enjoyed looking through the catalogs that came monthly. But I think I preferred going to a store, and holding my potential purchase in my had before buying, so I probably only bought maybe a dozen titles over the few years I was a member.

One purchase was this custom pressed test record. It was probably not terribly scientific, but it was fun to play around with. It had frequency tests and sweeps. Individual channel identification tests, and even a blank spot with no grooves to test anti-skating. 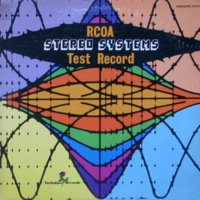 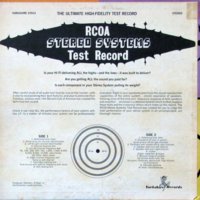 Many years later, Columbia House sucked me in with episodes of THE TWILIGHT ZONE on VHS tape. These things were well-produced and looked great on the VCR's and CRT-TVs of the day. But boy were they expensive. One tape would house about two hours worth of TWILIGHT ZONE programs - and there were something like 156 shows over five years. The club got you hooked with the first couple being very cheap and then there was the inevitable one per month or six weeks at the "low, club price" of only $29.95 plus shipping and handling. I stayed in that club to the bitter end, and I'd do the math to figure out what I spent, but it gives me a headache thinking about it. Those tapes were ultimately given away when I just had to have DVDs - and then Blu-rays of these same shows.

And I really got annoyed with Columbia House. Somewhere around the year 2000, I got wind that Columbia House had a different series available, one of my all-time sentimental favorites that I couldn't get anywhere else - THE TIME TUNNEL. This was a one-season sci-fi series from Irwin Allen that ran from 1966-1967, and I was never able to get it on tape in any way as no TV stations ran it in all my years. It had a cable run in the early 90s but I didn't get that channel, So when I found out the Columbia House had it, I was thrilled - except it was never listed in any ads or catalogs from them.

I called their customer support line and was told that it was not one of their offerings. I called again and again and each time was assured that Columbia House did NOT offer THE TIME TUNNEL. From eBay today:

Staff member
Moderator
I never joined any of the clubs. Since I was in the music biz, I had a hate-hate relationship with them. What really got me annoyed was, people who WERE in the clubs would bring in their unwanted records and want to trade me for something they did want. Of course I got very good at spotting the record club indicia on the packaging... sometimes it was pretty tiny but it was always there.

The closest thing to a club I ever joined was, in the 80s there was a magazine called Digital Audio, which later was renamed CD Review, run by a fella named Wayne Green. It came along at a time when CDs were hard to come by for many titles, so they would review new releases but also did a lot of writing about the reissues that were making big bucks for the labels at that time. Green loved to rail against the big, corporate music put out by the major labels; he was a champion of non-big-label music. He came up with a deal where he would send out a various-artist disc every few weeks with mostly jazzy instrumentals on it. Some of them were pretty good. I suppose the hope was that you'd hear something you liked and seek out the full length disk. I can't remember if there was a monthly fee for that or whether it was a pay as you go deal, or maybe it came with the magazine. I still have a few of the CDs. Wayne Green died some time ago and the magazine has been defunct for quite a while.

Thread Starter
Staff member
Site Admin
I really miss that magazine--I blame them for dozens of CD purchases over the years they were active.

Some of the reviews were of titles that other magazines never reviewed, and I liked that they covered reissues also. They might have been the label that introduced me to the dmp Records catalog--in fact, that's probably where I heard of the 3-inch A Touch of dmp CD sampler I ordered in 1987.

I'll also admit that Stereo Review, which had been around for decades at that point, had influenced more than a few purchases--they had a great staff of reviewers also. Some of them, like Phyl Garland and the legendary jazz reviewer Chris Albertson, I trusted implicitly and was never let down by anything they had recommended.

I vaguely remember Digital Audio had some sort of CD offer but I never took them up on it. I had enough "gateway drug" CDs they'd recommended that I probably didn't need more to tempt me.

I'm trying to remember at which point I learned that the club product was not as good as the genuine item. I may have read about it in one of the magazines I subscribed to at the time (Stereo Review, Audio). But that informed my buying decisions from that point on. I only ever joined BMG's CD club. The Discount Music Club was probably run by a rack jobber or distributor, since it was all genuine retail product sold at a discount (I want to say 20%).

I'm interesting in finding out what other clubs were around in the 60s and 70s. While shopping for used records, I remember running into a few where the label colors looked slightly off, then noticed that they were actually catalog number series nearly identical to what Capitol used. Not too much later, I learned Capitol had a record club.

The sound is a bit off on record club product. I remember finding a sealed T.J.B. Coney Island and it had this really strange sound to it--that's when I noticed the tiny "CRC" imprinted on the rear of the jacket. Others I found of 60s albums were a bit dulled over their genuine counterparts--it's no secret that the original labels were not going to send their best master tapes to the clubs. The digital age corrected that anomaly, although some publications like Stereophile insisted club CDs had more digital jitter than retail.