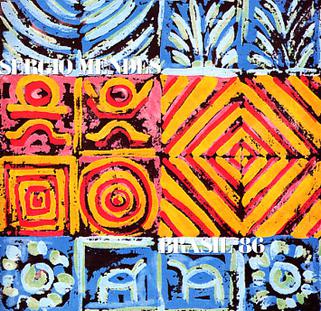 I have this one and even though it wasn't the Brasil 86 I was thinking of at the time it is still a Good Album there is a little more Brasil here than there was on Sergio's two previous efforts I did like Take this Love which was only a minor radio hit.and at least Lani Hall's cameo on No place to Hide alone makes it worthy of the Title BRASIL 86.

I have mixed emotions on this one. In the grand scheme of things, I guess I would have to say that I'm just not really that big of a Sergio Mendes fan. Aside from "Mas Que Nada", I never did get into the old Brasil '66 stuff as a whole. As for his 'solo' material, it's a bit more eclectic, but a lot of it never grabbed me either. Don't get me wrong. I do like a lot of different forms of music, and I love some Brazilian arrangements too (Lee Ritenour's "Rio" and "Harlequin" albums come to mind, as well as Ivan Lins, Djavan and a few others). But for some reason I just never could get into much of Sergio's material over the years. I can remember being extremely disappointed in his 1989 album "Arara". For some reason, I just couldn't get into it at all.

However, the exceptions to this rule were his three prominent early-mid 80s albums: "Sergio Mendes" (or "Picardia" in Latin markets), "Confetti", and of course "Brasil '86". The self titled album and "Confetti" are ones I thoroughly enjoy.

That being said, BRASIL '86 was my least favorite of the three. It's still a respectable album for the most part. But if there's any one criticism I can put on this album, it's that the arrangements are just too diametrically opposed to be on the same album, and that it's nearly impossible to smoothly transition back and forth between the styles. It's almost as if three albums were crammed together into one. Perhaps if the more funky synthpop songs had been presented first, segueing into the Joe Pizzulo ballads and then finally into the Brazilian arrangements toward the end, it might've blended together a bit better. It does appear that this was attempted on each side. But hearing "Nonstop" after "The River (O Rio)" is a bit of a head jolt.

On the other hand, I loved "Daylight". It's a great, upbeat album opener with a catchy hook, great vocal arrangements and decent instrumentation. "Nonstop" not so much. It has it's moments, but honestly I wouldn't miss it if I never heard it again. "Take This Love" and "What Do We Mean To Each Other" were decent, but again... to be perfectly honest, I've heard better vocals from Joe Pizzulo. Kinda indifferent when it comes to "It Hurts A Whole Lot More" or "Here Where I Belong". They're ok, I guess. In short, I could take or leave 'em. If I'm playing a Sergio Mendes playlist, I'll let them play. But I won't queue (Did I spell this right?) them up on their own. To quote the younger generation, "meh".

The true gems on this album were definitely the Brazilian styled songs, most notably "Your Smile" and "No Place To Hide" (I know... I never got into Brasil '66 but I love Lani's solo stuff and I love this track. Go figure.). "The River (O Rio)" and "Flower of Bahia" are both authentic, and Dori Caymi is a legend in Brazilian music. But then again, those aren't ones that I would ordinarily conjure up in my mind either.

Artists like Sergio Mendes, Quincy Jones or David Foster are a bit of a hodgepodge, or a potpourri of different forms of music. You kinda have to like a lot of different forms of music in order to enjoy these albums in each respective entirety. In the case of Sergio, he had that established 'Brasil' sound to fall back on whenever he felt like interjecting it into an album. On BRASIL '86, it's obvious that he wanted to re-explore the old Brasil '66 genre. But this was mid-late 80s and the American pop music canvas was by that point a totally different world. Thus the eclectic nature of the album. Ultimately, a blessing for those who can easily transcend all of the different genres, a curse for those who can't.
Last edited: May 24, 2017

Staff member
Site Admin
Back when discovering and logging onto Rudy's Corner (A&M Corner's early name) 20 years ago this year, is when I finally first heard BRASIL '86. Over the years, I'd been a big fan of Sergio Mendes from the '60s and early '70s, collecting and enjoying all of the albums up through LOVE MUSIC (minus PRIMAL ROOTS). After that, I lost interest in the group, but would collect any records I saw in radio station throwaway piles and give them a home - even if I never listened to them.

When A&M Corner re-awakened my passion for Sergio and his aggregations through the years, I began to explore those things I already owned. And I scoured my record "sources" for anything I could add and it turned out that BRASIL '86 was an easy acquire. There were a couple of copies in the radio station's record library - and by the late 90s, no-one in this radio station was going to be playing anything from BRASIL '86, so I asked if I could have a copy, and took it home.

Now, I had a memory about this particular album from the '80s. Those that were around will recall that when CDs were first being stocked by record stores, they were easy targets for theft, so the manufacturers devised a blister-package for those that didn't have a longbox. The clear blister pack would take out the booklet and put it in the top pocket, while the jewel case with the disc was housed in the lower portion, so in 1986, while combing the record stores for any possible Sergio Mendes & Brasil '66 albums, this album was easily findable in the racks. I can recall holding it in my hands and noting (from reading the credits on the face of the CD) that Lani Hall was back recording at least one track with Sergio. That made it somewhat interesting, but because I didn't recognize any songs on the album - none of them were played on my soft-rock station - I put it back in the racks. In those days, CDs were an expensive commodity, generally selling for $18.99 or so, which was came to a little over a $20 bill with tax.

But thanks to the radio station, I now had a brand new (from 1986) LP in my hands to play when I got home. As was my practice, I grabbed a new blank cassette and did a needledrop so I could listen on my commute to and from work. Typically, I'd start side one, go upstairs and take a shower as it dubbed, then come downstairs, start side two and go back upstairs and finish my daily grooming. Then I'd have brand new music to listen to in the car that day.

I remember stopping the tape as it was rewinding, just to double-check that the audio was OK. As luck would have it, the rewinding stopped on the song "The River (O Rio)", and I could have sworn something was wrong with the recording as I'd never heard Dori Caymmi's vocals before. His singing style and his deep voice sounded as if it were running too slow! I had to double-check the record to make sure it was OK - and it was. It was just me being stupid!

Anyway, I enjoyed the album a good bit and listened to it a lot in those upcoming days. Lani's contribution was nice, although a bit different from the Brasil '66 days. And just a short time later, I found the CD version (CD 5135) in a used record store.

Staff member
Site Admin
Funny--I really liked this album for many years after it came out. Today I play it, and I cringe at how dated it sounds. Can't say I'd be too heartbroken if it were accidentally erased from my music server. I guess our tastes change over the years...

Staff member
Moderator
I'm with you..... "dated" it is. It's those synths! Blasting blaring synths. The same thing that dates Herb Alpert's Bullish album.

There are four songs on this one that have stood the test of time for me...."No Place to Hide," "Your Smile," "Flower of Bahia," and "The River." The rest is forgettable for the simple reason that it doesn't sound like Sergio Mendes to me!

I was really struck by Lani Hall's vocals on "No Place to Hide." On many of her solo records, she sounds like she's really emoting, and she sometimes comes off as "trying too hard" to me. When she sang with Sergio, her vocals were always very laid back, easygoing sounding, with the strong emotion coming through when needed (such as the bridge of "Going Out of My Head"). That easygoing quality came back on "No Place To Hide," and it came back again when she reunited with Sergio for the song "Dreamer" later on. Must be something about Sergio that brings that quality out in her, or maybe he asks her to sing that way....I wonder.

Staff member
Site Admin
Funny--to me, only a couple of tracks on Bullish seem dated. I can still listen to most of the album straight through without cringing (except of course, "Maniac"). Brasil '86 just has a nearly incessant synth "sheen" to a lot of it. Can't knock it too much, though, since I did like it quite a bit back in the day!

Sergio produced Sarah Vaughan's Brazilian Romance around the same time. He does add some of his electric piano and synth to it, but it's only a small part of the mix. Vaughan's voice was kind of shot by this point, but musically I like the results. Replace Vaughan with a pair of female vocalists, tweak the arrangement to add a little more Brasil to it (a la Bassini, Romao, etc.), and it could almost have been a Brasil '66 album.
J

Contributor
Sassy and Sergio evidently fought pretty regularly over the sound of that album. IIRC it's George Duke on keys, not Sergio.

Staff member
Site Admin
I'd read that also. Although if you get Sergio Mendes to produce your album, shouldn't you expect it to have a certain Sergio Mendes sound to it?

My bad on the keys--yep, George Duke. There were a couple of flourishes in there that reminded me of Sergio's keys. (And given all the George Duke recordings I own...you think I'd know better.

)
You must log in or register to reply here.