Where to find the Mono mixes?

Thread Starter
I just heard Super Star in mono and WOW was I impressed. It was like hearing it all over again, just bright and vivid.

Are these available on cd, digitally, or online somewhere? I want these so bad.

I’ve become a Mono junkie after buying the mono LPs from the Beatles. It just has a distinct sound but it TOTALLY fits with Karen’s voice!

Staff member
Moderator
After "Ticket To Ride", the mono tracks are only available on promo 45s.

Harry said:
After "Ticket To Ride", the mono tracks are only available on promo 45s.
Click to expand...

Does that mean that these are limited/rare, and probably a collectable?

Staff member
Moderator
Promotional copies of records were usually limited to a run in the hundreds to cover the number of radio stations that would want or need one, so yes, they are more rare than standard stock copies which were pressed in the many thousands each. Mono-only promos, like "Close To You"/"I Kept On Loving You" were only needed in 1970 for those radio stations still broadcasting in mono, generally AM stations.

After a short time, A&M pressed promo singles with dual a-sides, stereo on one side and mono on the flip. That way the station could choose which one they wanted. The days of flipping over a single and playing the different song on the b-side was long gone at that point.
T

David A said:
Does that mean that these are limited/rare, and probably a collectable?
Click to expand...

The scarcest mono mix is probably the Canadian mono mix of the “Calling Occupants” edit (unless there’ was a mono release of the Argentinian single “Druscilla Penny/Help”).

What does "fold-down" mean, Harry?

Mark-T said:
What does "fold-down" mean
Click to expand...

In simple terms the audio has been folded down from wider two channel stereo (where you hear different things in your headphones in each ear) into one channel both sides - mono.

Staff member
Moderator
Fold downs result in the center channel getting a 3 db boost that is not what the original intent was.

Tomorrow Maybe Even Brighter Than Today

Kristopher said:
Are these available on cd, digitally, or online somewhere? I want these so bad.
Click to expand...

I made a playlist for you with a few mono mixes.
These are the only ones that are posted on www.youtube.com! here is the link ( )
Maybe there are more but I just couldn't find more.

Thread Starter
Thank you so much.
J

Times being what they are, I can't get this item, but it looks interesting enough to alert folks:
Canadian pressing, There's A Kind of Hush promotional 45, stereo and mono.
Here:
Carpenters - There's a Kind of Hush... - Canada promo 7" vinyl | eBay
A

GaryAlan said:
Times being what they are, I can't get this item, but it looks interesting enough to alert folks:
Canadian pressing, There's A Kind of Hush promotional 45, stereo and mono.
Here:
Carpenters - There's a Kind of Hush... - Canada promo 7" vinyl | eBay
Click to expand...

It’s interesting how the giant red “A” is on the stereo side. The “A” usually denoted the side for AM radio.

tomswift2002 said:
The “A” usually denoted the side for AM radio.
Click to expand...

Actually the A side was a way of designating to the radio program director (whether AM or FM) that song was the featured side. Sometimes commercial singles (non promo) would be delivered to radio stations with the "A" rubber stamped on them.

Staff member
Moderator
Thank you Paul. I meant to correct that and never got around to it. Some labels also printed "Plug side" indicating the side that was being promoted.
T

TallPaulInKy said:
Actually the A side was a way of designating to the radio program director (whether AM or FM) that song was the featured side. Sometimes commercial singles (non promo) would be delivered to radio stations with the "A" rubber stamped on them.
Click to expand...

Well I’ve seen a Few other A&M Canadian promos aNd the A has always been on the mono side to point out the mono. This one the A is on the stereo side, which in 76 would not have made a lot of sense as most people still had mono radio’s and AM listenership was still stronger than FM. So if I had seen the A in 76 and had been djing a mono (either AM or FM) radio station, and I was looking through a stack of records quickly I would be thinking that A meant mono not stereo.

Staff member
Moderator
There were lots of methods that record companies used to indicate the side of a single that should be played. Some used the actual text of "A Side" like on this one: 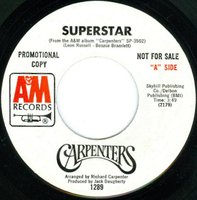 Others used a star to indicate the side to be played: 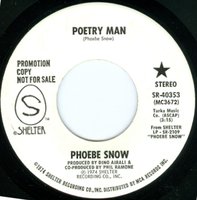 Some promoters put a sticker on the play side: 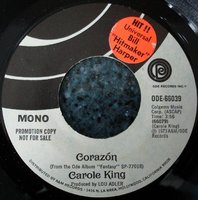 And sometimes it was left to the DJ or Program Director to mark the play side: 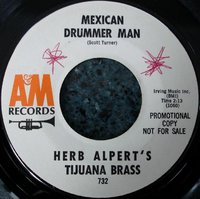 It had nothing generally to do with stereo or mono, other than when a specific case of one or the other needed to be indicated.

Most larger (major) cities had FM Stereo Rock in 1976. Many more people listened to FM at home , as well as, in the car than they do today. It’s sometimes hard to forget that private listening did not have as many options as are possible today. Even car manufacturers put car play in today’s cars to help us with options opposite radio. In contrast, DJ’s were also a staple then and today we are lucky to even hear the title of a song.
In 1976 at my home town, listening to radio was still with AM, for FM had the Muzak type stations. More older adults only were listening to stereo units in my home town, but when I visited relatives all radio were played on their favorite on FM Stereo outside of box sets by both adults and youth and more with tuner/receiver components on the shelf. I believe it was a transitional year many ways. It was also a year of notable decline in what was called Soft Rock, being banished to easy listening stations, which took them away from the buying public and some cities had no formats available for them for the Carpenters were not Rock and not Muzak. (New artists had more options, as well on Top 40 stations) So, with radio no longer grouping Soft Rock on what is now Classic Rock stations, it created a playing ground which led to A Kind of Hush without the options for air play. Not only was it a softer sound pushing them off the Top 100 stations, but options were greatly reduced. And most fans who grew up with the Carpenters were now adults, without many new fans. With fans becoming adults, it helped open the field for television. Many adults did not buy singles but their fan base was still attached, although most favored their catalog that had accumulated by 1976. This radio transition helped open many options with perfect timing for Disco, since it was the “newest” sound.
At the time, I noticed Soul and Rhythm and Blues then, which were also options for FM. While a good bit of rhythm and blues were reflective in the solo album, it could have lead to new listeners, which in turn, would create new fans for the Carpenters. I do believe music in the industry was more pigeonholed then when it came to a group’s identity, which probably helped shelve the album. In 1982, their demand was not strong in the USA, but at the time of her passing in 1983, People magazine had record sales with her story, which showed that there was still a large and strong fan base of appreciation.

What a fascinating article, I'd really like to hear from Harry, Rudy and Chris on this one... Caution: Stereo Can Be Hazardous To Your Mono Don Elliot and Richard Carpenter Broadcast Programing & Production Magazine Nov 1976

I am going to upload some of the mono mixes that I own onto Youtube. I've been trying to find the files I made for them and magically stumbled across them today!

Let's begin at the beginning., shall we?
TICKET TO RIDE: