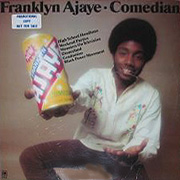 Album liner notes are like funeral eulogies. They're very often misleading. Just as a minister can make the death of a rotton mother ________ seem like a tremendous loss to society, liner note writers often extol the virtues of an inferior album, claiming that listening to certain cuts from it will cure every disease known to man. However after you buy the album and listen to it, you feel like finding the dude who wrote the notes, putting a gun up to his head and saying "Hey, you jive sucker, you owe me $5.98, I want it now, and I don't accept checks!"

Due to the fact that on occasion I have also been fooled by 'hype' liner notes I've decided to write about the contents of this album myself.
Side one deals with the experiences and observations about the predominately black high school that I attended. I talk about the hoods or so-called "bad brothers" that made life miserable for teachers and skinny dudes like me. All in all I'm trying to hip people to the other side Room 222 if you dig what I mean. On side two I rap about my college days at UCLA, my experiences in New York City and make I what I consider to be some humorous observations about television shows and commercials.

In summing up I would just like to say that I find a lot of things, events, attitudes etc. in our society absurd, and this album is my attempt to illustrate why I hope you dig it.
PS: 'Cause if you don't dig it you're not getting $5.98 from me, gun or no gun.

Staff member
Moderator
I have this. Funny album, if a bit dated (especially the TV commercial parts). Ajaye has a style that you need to get used to, but overall it's a good listen.

"Went to Disneyland high once. Almost lost my mind when a six-foot mouse walked up to me."

If memory serves, he made another A&M album called "I'm a Comedian, Seriously," correct? I never did hear that one (providing it indeed exists and isn't just a figment of my imagination!)

He made an album on Little David Records called "Don't Smoke Dope, Fry Your Hair" which was also pretty good. He's never going to replace Richard Pryor, but it's worth checking out if you like this one.

Staff member
Site Admin
I've never run across the album, but Mr. Ajaye was in one of our favorite "guilty pleasure" movies: Neil Diamond's THE JAZZ SINGER.

Staff member
Moderator
Thread Starter
I don't own a copy, but I'M A COMEDIAN SERIOUSLY (A&M SP 3642) was released in 1974.

Staff member
Moderator
He also appears in at least one of the Stir Crazy with Richard Pryor and Gene Wilder --he's in the infirmary talking about how he went in for an appendectomy and they removed his testicles. Very funny stuff. He also wrote for In Living Color. He now lives in Melbourne Australia.

visit: http://www.comedycontact.com/ajaye.html to book him!

I noticed that the record was produced by Wally Amos. By any chance would this be the guy better known as cookie mogul "Famous Amos"?

Comedy Albums, I usually listen to once--kind'a like seeing the person perform in-person; I don't think they're meant to have much of a shelf-life... See a lot of LP's by Flip Wilson, Steve Martin, and Redd Foxx (I had You Gotta Wash Your Ass, one time)

which I'm curious about but probably likely to sell or trade, if not return... And I once had a few albums by Al Sherman and Cheech & Chong, as well!