Just this afternoon while picking some work music for the queue, I was surprised to see Burt's first three A&M albums released in high-res. (They show up under "Versions" in Roon Player.) These make me question a couple of things. 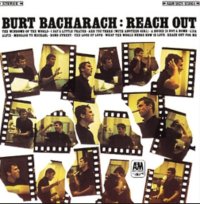 First of all, what were the sources? Were the originals burned up in the Great Universal Pit-BBQ Incident of 2008? If so, are these made from backup masters?

Second, there were two recent reissues of Reach Out and Make It Easy on vinyl. Given how the majors reissue things these days, were these 24-bit/96kHz digital files the source for cutting the vinyl? Most likely, I'd say. That is why I resisted buying them, instead holding out for sealed, new old stock copies.

I'm listening to Reach Out at the moment, something sounds "off" about it. And it was "Bond Street" that really stood out--they sucked the life out of this with digital noise reduction. The reverb on the opening guitar figure is chopped off.

The endings of the first few songs are also faded off early to eliminate the "dreaded" tape hiss.

Switched right over to the version from the Something Big box set. And while this set is duller (the original pressing LP still sounds best), it has faint tape hiss and the reverb is intact. It also makes it painfully aware that the high-res version has the high end goosed up to make up for the life that the digital noise reduction sucked out of it.

Make It Easy on Yourself fares better--sampling some random tracks with quiet sections, the tape hiss is noticeable (or I should say, unaltered--it is never intrusive), and the reverb trails are intact. EQ? Yeah, the bass is a little more boomy than it should be on the high-res version, but the highs are only very slightly brighter. The title track and "Knowing When to Leave" are the best tracks to compare for differences.

Butch Cassidy and the Sundance Kid is a mixed bag also. On "Not Goin Home Anymore," a good track to listen to for alterations, no noise reduction was apparently used or, if so, it was used very sparingly. Yet the highs, again, are goosed up. The tape hiss has an unnatural sound to it, and the highs on this are strident and painful, like they are on Reach Out. It doesn't sound natural, especially with bass that thuds.

And for the curious, here's yet another reissue where they'll screw up the sound with digital EQ, yet won't do the simplest of fixes and get rid of the CSG processing.

Amusingly, the CD-resolution version on Qobuz is a different, earlier mastering and actually sounds nearly the same as the Something Big box set version. Plus, on the streaming version from Qobuz, thanks to the "wonders" of music licensing, both of the vocal tracks with B.J. Thomas are unavailable; I would hope these are available if purchased through the Qobuz Store.

These are three high-resolution releases to skip.
Click to expand...

Staff member
Moderator
Funny, if you had told me in the 1970s that music reissues (and formats) from 50 years later would SOUND WORSE than the original LPs, I would have said you were nuts!

Mike Blakesley said:
Funny, if you had told me in the 1970s that music reissues (and formats) from 50 years later would SOUND WORSE than the original LPs, I would have said you were nuts!
Click to expand...

That's the sad state of affairs today with reissues, unfortunately.

For cons, tapes are years if not decades older than the first time they were released, so there is some degradation, especially if the tapes were not stored well, or the tapes deteriorated (like the Ampex 456 sticky-shed problem). On top of it are some mastering engineers who insist on noise reduction, putting a "smiley-face" EQ on the original to boost the highs and lows, and sometimes even brickwalling them to be louder, sucking the life out of them.

But on the pros side, some mastering engineers out there today do care about the product they put out, and some of the reissues (especially in vinyl) sound far better than any other version to date. In addition, some engineers and record labels take the time to do proper research and find the original tapes, so the sources are better than anything in the past, including the original pressings. It's not uncommon for the better engineers to remove layers of "muck" when using the best tapes and doing a good remastering that respects the original recording while also bringing out the best of it.

It's like the Pallas-pressed 2-LP 45 RPM set of Fleetwood Mac's Rumours--the Hoffman/Gray mastering actually had minimal work done to it for the remastering, essentially just letting the original tapes play without anything but very minimal adjustments. Often, with major labels, their own mastering covered up what was on the tape originally, and the original tape probably sounded fantastic. There is a clarity there that wasn't present before. (Steve Hoffman did the same with the first Phil Collins solo album for Audio Fidelity--what was on the tape sounded great, even if it varied from track to track--that is how Collins recorded it, and without any intervention, that original master sounds better than other versions out there while still sounding like the album we all remember.)

Some of the bad modern remasterings sound good for the first minute or two, or even the first couple of times played, but later listenings start giving a feeling that something is a bit off from what you remembered, and your gut instincts are usually correct in that case. And there are also times you can go back to an original pressing and think it sounds mediocre, until you listen more and realize how much more natural everything sounds without the highs and lows being cranked up.

That's one reason I like what Randy has done with Herb's remasters--he preserved the sound we all grew up with, even though it took some work and a lot of restoration to get to that point. That's why with good remasters, it just sounds right (but better!) when you play them, especially with recordings you've heard all your life.

The End results always speak for themselves when it comes to Reissues you can tell if some effort and work was put into it or if it was just something slapped together that ends up sounding far removed from what we remember I'm pretty selective if it sounds Good to me I'm in but if not I will look for the best available version regardless of Cost.
You must log in or register to reply here.