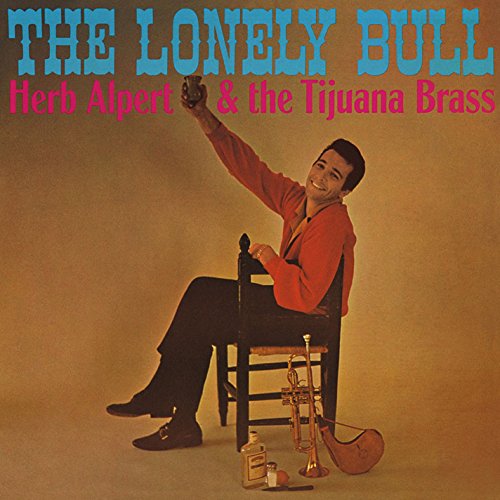 This is Tijuana Music - the noisy Mexican-American voices in the narrow streets, the confusion of color and motion - captured in the sound of the Tijuana Brass.

Tijuana is a spectacle, a garish border town....But it is also sometimes a strangely wistful, romantic place, and that quality is represented here by the often haunting trumpet of Herb Alpert.

"The Lonely Bull" started it all. Herb organized the Tijuana Brass to combine a persistant melody written by a friend with the inspiration of the Tijuana bull-ring. And now this album, and a chance to hear Tijuana in all its aspects, played by trumpeter-arranger-composer Herb Alpert, and the bright, bold, versatile Tijuana Brass. :Hernando Cortés

Staff member
Site Admin
The new 2016 Herb Alpert Presents version of THE LONELY BULL is an exciting addition to my collection. When compared with the decade-old mastering for Shout Factory, this one excels in every way.

Tracks that were hard-panned on the Shout version are now tamed to sound really good with headphones. Back in 1962, most recording engineers were still trying to figure out how to make stereo records. Many tracks from those days placed sounds in extreme right and extreme left. It sounded good on those big old Motorola console stereos, but in these days where most people seem to do their listening with headphones or earbuds, that kind of stereo gives the brain a problem. Since both of our ears hear sounds around us, even those sounds on one side of us have some component that's picked up by our "other" ear. As a result, on a hard-panned record, a sound coming only from the right is ONLY heard by the right ear. The brain is then saying to the left ear, "Hey, how come you're not sending any information?"

And that little conversation results in the discomfort you hear with headphones when listening to things like Herb's tracks on this early album, early Beatles stereo, Mamas and Papas, etc. Bernie Grundman has adjusted things for the modern era without losing any of the flavor of the recordings. Things still sound left and right, just not as exaggerated. I have been highly critical of the recent Frank Sinatra reissue of his Jobim recordings, not so much because the wide stereo was narrowed, but because in doing the remixing, they lost much of Antonio Carlos Jobim's vocals, burying them in the final mix.

If you listen closely to the Shout reissue, virtually every track on THE LONELY BULL starts out with a left-channel whoosh sound that only lasts for a millisecond or so, but it's there. The new versions on the HAP release are way smoother by comparison.

Suddenly, this funny old album by Herb Alpert is much more listenable - maybe even "Tijuana Sauerkraut"!

Points deducted for the misspelling of "A Quiet Tear" on the inside track listing. "Quite" a mistake!

Staff member
Site Admin
Thread Starter
The problem with The Lonely Bull was that it was pretty much a monaural recording on some of those tracks, and the added parts were tacked on after the fact to make a stereo release. That is why to me, the mono LP always sounded more cohesive, especially since some of the stereo tracks were silent in sections. (The tracks that were recorded in true "stereo" are very obvious on this album.)

Normally I would say to leave the old recording alone but here, the stereo version with the "improvements" does pull the whole sound back together IMHO. Definite improvement.

Staff member
Site Admin
I've just done an a/b comparison of the old A&M CD of THE LONELY BULL with the new Herb Alpert Presents CD. These two compare rather favorably. The old A&M CD doesn't have the severe panning and the noise levels found on the Shout issue. If there's any difference, I'd say that the new HAP CD has an ever-so-slight bass frequency increase. Nothing outrageous - mostly not even noticeable - but every now and then you can detect just a bit more oomph in the bass. I think I hear it most in "Limbo Rock".

Meanwhile, I'm really disliking virtually everything about the Shout reissue.
A

Harry: Does Crawfish have the muted solo or open horn on the HAP version?
M

Is the Title Track and "Acapulco 1922" in true Mono,or are they the Stereo versions,with the Overdubs?
A

mr_mjb1960: That reminds me; does Acapulco 1922 have the percussion in the intro?... and then repeat, open horn solo or muted on Crawfish?
M

abstract_fan said:
mr_mjb1960: That reminds me; does Acapulco 1922 have the percussion in the intro?... and then repeat, open horn solo or muted on Crawfish?
Click to expand...

Only on the Stereo Mix,the Mono Mix does not.
A

Yes,sadly,so does the HAP issue as well,as I've already heard them on Spotify.

abstract_fan said:
Harry: Does Crawfish have the muted solo or open horn on the HAP version?
Click to expand...

mr_mjb1960 said:
Is the Title Track and "Acapulco 1922" in true Mono,or are they the Stereo versions,with the Overdubs?
Click to expand...

The HAP version of "The Lonely Bull" song has the stereo version - main track right, Herb's solo left. But the stereo is narrowed to make it more "comfortable" to listen to. The mono version is on DEFINITIVE HITS.
C

Harry said:
The HAP version (and all official CDs) has the muted solo. Only the mono version has the open horn solo.
Click to expand...

That's not true. The mono version was also a muted solo, but a completely different solo.

Captain Bacardi said:
That's not true. The mono version was also a muted solo, but a completely different solo.
Click to expand...

Captain Bacardi said:
That's not true. The mono version was also a muted solo, but a completely different solo.
Click to expand...

Sorry for my confusion then - and I hate distributing wrong information. So there ISN'T a version with an open-horn solo? Or is there?
C

Moderator
No open horn solo at all.

Staff member
Site Admin
OK, my confusion came from the question asked by abstract_fan and my brain accepted his premise. Bottom line is only mono versions have the different solo, and none of the official CDs.
A

I think it's actually kinda "haunting" if, you: listen to the original and have the balance turned all the way to the *right*...so, that, it sounds like a 27 year-old Herb is playing solo "live" in YOUR ROOM(!).
The whole "panned stereo" had more to do with these independent, "pop warehouse" studios, generally, not updating their recording equipment to support multi-miked arrangements (because the stereo mixes of the same era done at "the majors" -including: when the film studios had *their* own record companies- was ahead of the services creating product for AM "Top 40" radio). I mean, even though 4-track recording would last until 1967 (while Gold Star was still using *three*!)...MGM and London (Decca), for example, had 20(!)-track mixers custom built for them as early as 1963.
You must log in or register to reply here.