Staff member
Moderator
What Harry describes only occurs on 5 of the 41 ForePlays I own... Most of the later ones are straight cuts form the albums in their entirety. They are truly wonderful samplers -- particularly in the random order of cuts: where else will you hear Ali Thompson's "Give a Little Rhythm" followed by The Cramps' "GooGooMuck"???

They indeed had different titles. White label promos. My earliest one says Sampler on the label. It’s from the 2 record set The (artists names) album. A&M 8096. I only bought ones with Carpenters on them. It has Don’t Be afraid on side 2. From Ticket To Ride. The inner sleeve shows album covers, and has Close To You and Carpenters among them. It has a gatefold sleeve. B&W pic of Carpenters inside. Picture of Ticket lp among others on back cover. I’m guessing it’s from 1971? Why they chose that cut is beyond me. Cool though. Fog and Spice by Tim Weisberg is among the other cuts. Foreplay #12 1978, has Ave Maria/Have Yourself A Merry Little Christmas, Foreplay #44 has WYBIMLA June 1981. A&M Summer Spectacular A&M 8330, 1975 has Solitaire 4:42 version. Most don’t give times, but this album does. My favorite is the Valentines Day sampler Love That Music A&M LTM-1 it has CTY, Herb Alpert This Guy...
Peter Allen I Honestly Love You, and many other great tunes. 16 cuts! It can be done. 8 cuts a side. Nice color cover. Then there were ones called Hit Kit. A&M 8430 has AYGFLIALS, the songs are from different years, not just 1977. The last one I have is Hit Kit A&M 8444, it has the Calling Occupants edited version, 1977.

Staff member
Site Admin
Thread Starter
Breaking in some tubes in the recent desktop amp switch, and spinning this one tonight:

Rudy said:
Breaking in some tubes in the recent desktop amp switch, and spinning this one tonight:

Bobberman said:
... and Peter sellers liner notes on the album are Hilarious ...
Click to expand...

And they make a lot more sense now than when I was reading them at 7 or 8 years old.

That was one of a handful of Mancini's records that we had. Breakfast at Tiffany's is spinning right now. I've been meaning to recreate my "Mancini After Midnight" playlist that assembled a lot of his downtempo, quieter tunes.

Staff member
Site Admin
Thread Starter
Signing off for the night, with the following two playing:

Staff member
Site Admin
I first encountered the Prokofiev 3rd Piano Concerto back in the early '80s through the movie, THE COMPETITION. If you've never seen that movie, it's about a piano competition that features actors Richard Dreyfuss and Amy Irving, with a wonderful supporting part by Lee Remick. Dreyfuss plays the long-in-the-tooth competitor about to give it all up, while Irving is the up-and-comer with Remick as her teacher. The Prokofiev 3rd is the featured performance by Irving at the conclusion of the competition, and a full 7+ minutes of the piece is included in both the movie and the soundtrack.

I mention that because no movie today would dare devote such a large chunk of screen time to a classical piano concerto, but this one did. Good movie if you can find it.

Staff member
Site Admin
My currently spinning album is from The Vogues. It's their fifth and final studio album for Warner/Reprise called THE VOGUES SING THE GOOD OLD SONGS AND OTHER HITS. 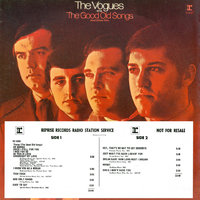 That's my copy of the album - it's obviously from the radio station.

I've had it for years, but something recently reminded me of The Vogues song called "Easy To Say" which is contained on this album. There was a period in the late sixties where The Vogues issued hit after hit to both pop radio and even moreso to MOR radio. Songs like "Turn Around, Look At Me", "Earth Angel", "Till", "No, Not Much", and "Moments To Remember" filled the airways in between the Dionne Warwick songs, the Tijuana Brass and of course Sergio Mendes.

I surely remember "Easy To Say" playing in that rotation quite a bit, and yet as I examine the Internet's reconstructed history, I find that it only appeared on this one album, and as a b-side to the 45 single of "Green Fields". I don't know whether radio flipped the single over, or if it was a case of a double a-side single, or simply that it was featured from the above album. The song was composed by Paul Anka, who'd recorded it ages ago in a very different form. It appears that this version was specially tailored for The Vogues with changes to both the melody and the lyrics.

Anyway, it's been one of my recent earworms, so I dug out the album to clean it up and needledrop it. There are a few other interesting tracks on the LP (released on CD as part of a two-fer, now expensive, and a Japanese import - also expensive) like "Hey, That's No Way To Say Goodbye" which can be found on several of The Vogues hits compilations.

An interesting track is found on side 2 called "Just What I've Been Looking For", a Roger Nichols/Smokey Roberds tune that can be found on a Japanese Roger Nichols comp in a demo-sounding track by the Small Circle Of Friends. This Vogues version is much more fleshed out as arranged by Al Capps.

Working from home has its advantages. Been listening to The Clash this week - London Calling.

Staff member
Site Admin
Thread Starter
It's been a while since I've played any Clash here. I remember Combat Rock coming out right at the tail end of high school.

Rudy said:
It's been a while since I've played any Clash here. I remember Combat Rock coming out right at the tail end of high school.
Click to expand...

Bobberman said:
I remember the Single "Rock the Casbah" by the Clash which Is one of many i wore out with continuous playing " Shareef don't like it"

That’s a good one to blast at traffic lights if you’re in kind of a mood.

There were 2 versions of The Clash "Rock The Casbah" which the single 45 version has more of the yelling & also the "bomb" sounding which is quieter than the album version!!!
A

DeeInKY said:
That’s a good one to blast at traffic lights if you’re in kind of a mood.

Our local dance station (??) used to play the instrumental version from what was probably a promo 12" single. They were also the ones that introduced me to The Police (via "Voices Inside My Head").

"Train In Vain" was sampled by Garbage on their first album, for the track "Stupid Girl." Basically the drum loop.

I think it's time for some "Radio Clash," doncha think?

Rudy said:
I think it's time for some "Radio Clash," doncha think?

It appears that you're not much younger than me, Rudy. I was a college sophomore when Combat Rock was released.

I still blast "Should I Stay or Should I Go" from time to time. I've even been known to sing along (badly).

Shhh... don't tell the gang in the Carpenters forum!

Murray said:
It appears that you're not much younger than me, Rudy. I was a college sophomore when Combat Rock was released.

I still blast "Should I Stay or Should I Go" from time to time. I've even been known to sing along (badly).

Shhh... don't tell the gang in the Carpenters forum!

Yep, we're about the same age. "Rock The Casbah" came out the month before graduation (June 1982), and I remember Ghost In The Machine (The Police) made some waves among a few of us at school, with Prince's Controversyi being an underground favorite (many listened but wouldn't admit it

) and MTV being the new fascination for those who had cable TV at the time.

The Freeze Frame album by J. Geils probably made waves across the whole school (released Oct. 1981) as even the rock fans embraced that one (this was the era of arena rock like Kansas/Journey/Foreigner or harder rock like Led Zep/Sabbath/AC/DC which most listened to). Freeze Frame is still a blast to listen to in addition to the three hits: "Flamethrower" and "Insane Insane Again" might even be considered experimental while also being a lot of fun.

I also noticed in the credits for Flame Thrower that Luther Vandross and Fonzi Thornton provided backing vocals--they and the group that worked with them provided vocals for a lot of albums back in that era, including some of Chic's big hits. Earlier, he sang on Bowie's Young Americans. Luther also did lead vocals for a couple of other groups ("Hot Butterfly" with Bionic Boogie, "The Glow of Love" and "Searching" with Change, and a track with Patti Austin on a Quincy Jones album) before his big solo debut album in 1983 which made a big splash.

If your a Yes fan, check out Starcastle, group from Chicago who made their debut album on Epic Records in 1976. The 10 minute song "Lady Of The Lake" is a great song!! Their 2nd album from 1977 is better than their first album. They made a comeback in 2007 but that CD is no longer made & not available on iTunes.
A

The J. Geils Band final album from late 1984 "You're Gettin' Even, While I'm Gettin' Odd" (minus lead singer Peter Wolf) failed to chart. They made 1 more song with the movie theme called "Fright Night" in May of 1985 but that was it.

Staff member
Site Admin
Thread Starter
Peter Wolf split from Geils after this album, and both of them fell into somewhat obscurity. Wolf had a minor hit with the first track on his solo album, but I can't recall anything Geils did after Freeze Frame.
A

The late J. Geils did a blues album a while back. Peter Wolf best solo album is 1998 "Fools Parade"!!
You must log in or register to reply here.

Jan 15, 2021
rockdoctor
R
David Pomeranz Interview on Carpenters and "Tryin' To Get The Feeling Again"